The artworks created are "light works," that is, luminous installations linked by the common denominator of electric light. Each artist was asked to create a piece that would best use the expressive potential of light to convey its emotional power. 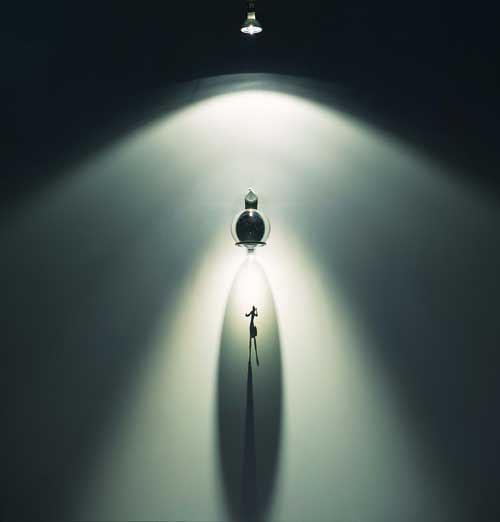 32 works by 30 international artists on the poetry of light


This extraordinary exhibition was born in 1997 from the idea of Paolo Targetti, CEO of Targetti Sankey S.p.A., one of Italyâ€™s leading manufacturers of high-tech lighting fixtures (such as those illuminating Michelangeloâ€™s "David" and Leonardo Da Vinciâ€™s "Last Supper"), and Amnon Barzel, former director of the Jewish Museum of Berlin and the Luigi Pecci Center for Contemporary Art in Prato, Italy.

The Light Art Collection, says Targetti, was "inspired by the desire to succeed in extending to art the dimensions of a world that cannot be relegated to the confines of science and technology." Barzel, curator and artistic director of the exhibition, adds that it "follows the heritage of collaboration concepts between art, industry and science from the beginning of the past century."

The artworks created are "light works," that is, luminous installations linked by the common denominator of electric light. Each artist was asked to create a piece that would best use the expressive potential of light to convey its emotional power. Different techniques of lighting â€” using fluorescent, dichroic, and neon lamps, wood lamps, fiber optics, and body motion sensors â€” support their concepts, language, and style.

The Targetti Light Art Collection will make its North American debut at the Chelsea Art Museum after having been shown in numerous European and South American venues since beginning its tour in 1998. Its permanent home is the Villa La Sfacciata, situated in the hills outside Florence and home of the Targetti Lighting Academy, a foundation dedicated to promoting the synergy between light, art, and technology.

The exhibition will open in conjunction with Lightfair International 2003, the most important annual trade fair dedicated to the lighting industry, which will be held at the Jacob Javits Center in New York City from May 5-8. This concurrence provides Targetti with an excellent opportunity to convey the importance of the emotional and artistic value of lighting to the American museum-going public as well as to the associates of Targetti who share their interests in lighting design and art.

The Italian Cultural Foundation of America (ICFA), a non-profit foundation based in New York City whose mission is to provide a venue for Italyâ€™s culture that is commensurate with its historic and contemporary significance, is proud to co-sponsor this exhibition. The exhibition is held under the auspices of the International Association of Lighting Designers (IALD), La Sfacciata Lighting Academy, and the Italian Trade Commission. Major support has been provided by Gucci. Special thanks to Alitalia, Starhotel, Biscottificio Antonio Mattei in Prato, Marchese deâ€™ Frescobaldi, Robert Mondavi, Antinori, and Castello Banfi di Montalcino.