Ten flags that discretely framed the event in Ladeburg. Each flag depicts a different drawing of two horses wearing the same hat, accompanied by the words "10 Years of Jay & Q" in an ornate script. 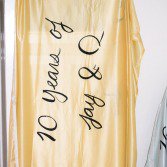 t's Saturday's 'S-Class' show jumping championship in Ladeburg, once again presented by the artist-duo Jay Chung and Q Takeki Maeda––one an American and the other Japanese. They have worked together in collaboration for 10 years … since exactly 2002. They've had many international exhibitions in galleries and museums. In Berlin, they are currently represented by the gallery Isabella Bortolozzi. And on the occasion of their 10 years of working together, they are endowing the prize … of the Saturday show jumping championship of 2012.

And if you have a look around the edge of the parcours… to symbolize their 10 years of working together … swaying in the wind of Ladeburg, 4 flags—10 flags, sorry, 10 flags—in 10 different colors. And maybe have a look, it's very funny: horses are shown with very, very different … hats.

On the one hand, this is meant to represent the variety of their ideas, on the other, the variety of ways that exist to work together with the horse.

In the months preceding their first major solo exhibition in the United States at REDCAT, Berlin-based artists Jay Chung and Q Takeki Maeda endowed the prize for the "S-Class" show jumping championship in Ladeburg, Germany. Having worked together since 2002, Chung and Maeda's presentation of the award marked the tenth anniversary of the artists' collaboration, which began with Modus Tollens (2002), a work that framed their friendship as the basis of their artistic practice. The commemoration of the artists' ten-year history extends the durational logic of this earlier project and points to their own artistic history as a potential working material. In this instance, the artists use the time that has elapsed over the course of their ongoing relationship as the starting point for a new artwork.

For the exhibition at REDCAT, Chung and Maeda present the ten flags that discretely framed the event in Ladeburg. Each flag depicts a different drawing of two horses wearing the same hat, accompanied by the words "10 Years of Jay & Q" in an ornate script. The flags take on an unassuming style and manner to render the commemoration of the artists' career into an understatement, a gesture further reflected by the modest scale of the event in Ladeburg.

In addition, a new video produced for the exhibition at REDCAT translates a selection of recent and historical artists' statements into a choreographed monologue performed by an actor. Culled together to form a single voice, the statements express an ongoing generational dissatisfaction and disillusionment with younger artists. Brought together in this context, the two projects by Chung and Maeda come to represent the processes by which an artist and artwork are deemed mature, and how a general fear of cultural decline and loss of idealism is inherited from one generation to the next.

Jay Chung (b. 1976; Madison, WI) and Q Takeki Maeda (b. 1977; Nagoya, Japan) currently live and work in Berlin, where they have been based since studying together at the Städelschule in Frankfurt. Their work has been included in numerous international exhibitions in such venues as Kunstverein Frankfurt; CCA Wattis Institute for Contemporary Arts, San Francisco; Konsthall Malmö, Sweden; and Migros Museum für Gegenwartskunst, Zurich. Recent solo exhibitions have taken place at Cabinet, London (2011); Isabella Bortolozzi Galerie, Berlin (2010, 2006); House of Gaga, Mexico City (2009); Cubitt Gallery, London (2008); Künstlerhaus Stuttgart, Germany (2007); and Museum of Modern Art, Bologna, Italy (2006).

Gallery at REDCAT aims to support, present, commission, and nurture new creative insights through dynamic projects and challenging ideas. The Gallery presents five exhibitions every year, often of newly commissioned work that represents the artist's first major presentation in the U.S. or Los Angeles. The Gallery also maintains an active publishing program producing as many as two major monographs per year. Proceeding from the geographic and cultural specificities of Los Angeles, its program emphasizes artistic production of the Pacific Rim—namely Mexico, Central and South America, and Asia—as regions that are of vital significance to California. The Gallery aims to facilitate dialogue between local and international artists contributing to a greater understanding of the social, political, and cultural contexts that inform contemporary artistic practice.

Gallery at REDCAT is open Tuesdays through Sundays from noon to 6pm or until intermission. It is closed Mondays and major holidays. Admission to the Gallery at REDCAT is always free. REDCAT is located at the corner of W 2nd and Hope Streets, inside the Walt Disney Concert Hall complex in downtown Los Angeles (631 W 2nd Street, Los Angeles, CA 90012).