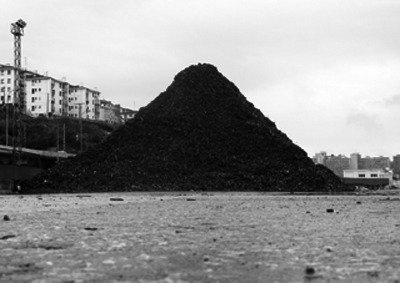 The Centro Cultural Montehermoso Kulturunea presents the projects selected from the entries submitted to the Art and Research 2011 annual open call. The eight artists' projects have been produced by Montehermoso during the 2011–2012 season.

Pedro Neves Marques, Where to sit at the dinner table?
Shot in Brazil and Portugal, this film reads as an oblique fiction-documentary narrating two parallel plots. On the one hand, one sees images referring to the encounter between the Europeans and the native Americans from Brazil in the 16th-century depictions of animal and plant life from the same period, and an overall imaginary of anthropophagy. In contrast, a voice over narrates the historical reciprocity between ecology and economics from the 1940s to nowadays, including the transformation of the concept of ecosystem into management and of chaos theory into individualistic neoliberal competition. (P.N.M.)

Carme Nogueira, El centro en desplazamiento II - La citoyenneté
Kicking off in Berlin, this project proposes a tour of different European cities, analysing the construction of the concept of citizenry and its relationship with the configuration of the urban and social landscape. The section presented in Montehermoso is a tour of four enclaves in the city of Paris. By analysing the architecture and urban planning, the artist shows us how we interpret our environment, its symbolic component, and its representations, generating fissures and contradictions.

Alexander Provan, Popular Legacy
Popular Legacy is a study for a memorial. An exhibition and a publication composed primarily of reproductions of documents taken from an abandoned Iraqi embassy in former East Berlin and materials related to the history of memorialization in Germany and the bureaucracy governing that process, Popular Legacy is also a study for what is not, cannot, and perhaps should not be a memorial. This project considers the way in which historical meaning is consolidated and fixed to certain symbols, documents, monuments, ruins, procedures, and discourses—how that meaning might be loosed from such forms, circulated by other means and to divergent ends.
(A.P.)

Xabier Salaberria, S.T.
The methods for constructing and creating exhibition languages is the starting point for this study by Xabier Salaberria. The apparent neutrality of the white cube, alongside other imagery from the Modern movement, is questioned by the artist, generating a crisis in the way we interpret the relationship between form and function. S.T. is a space for recognition and alienation, where we can experience our relationship with the exhibition device and its links to other territories.

Camila Sposati, Charting Revolution
This project presents different cartography generated by the artist, where she incorporates elements which tend to be sidelined in the typical representation of the globe. This way the construction of anthropocentric and "horizontal" scientific thinking is questioned. Views of the Darvaza crater (Turkmenistan), where in 1971 a huge pocket of gas was discovered by accident, become the starting point to create a "transversal" perspective of our world.

Belén Uriel, Useful Household Objects Under $10
In 1938 the New York Museum of Modern Art held a show which displayed everyday objects with a price tag under five dollars. Belen Uriel kicks off from the second exhibition in this cycle to carry out a project based on the ways taste is constructed and the Modern movement's establishment in society. By deconstructing and reconstructing the elements, the artist confronts us with the ways in which ideas such as taste or distinction have been naturalised when in reality they are a result of specific social and political interests.

Carla Zaccagnini, elements of beauty
Starting from Marie Richardson's attack on Venus at her Mirror by Velasquez, the artist has made a publication which gathers documents from the time and establishes a narrative on the troubled relationship between beauty and violence. The female body becomes a container for these conflicting forces, as shown by the words of Richardson herself which became the title for the project: "Justice is an element of beauty as are colour and the brush stroke on the canvas."