Interventions. Presented on flat-screen monitors encased in frames, the artist's portraits appear initially as conventional photographs or illustrations, each depicting one or more figures rendered abstract through the use of masks and costumes. 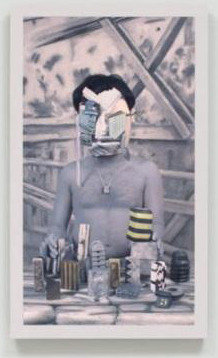 Works by Brian Bress have been described as inventive, humorous, and "discomfitingly complex." Interventions: Brian Bress represents the first museum exhibition of the artist's video portraits. Presented on flat-screen monitors encased in frames, the artist's portraits appear initially as conventional photographs or illustrations, each depicting one or more figures rendered abstract through the use of masks and costumes. Embodying references to imagery found in modern art, these works are simultaneously familiar yet peculiar. Subtly and slowly moving at a nearly imperceptible pace, they possess a distinctive relationship with the uncanny.

Andrew Berardini for Art Review (March 2012) writes that Bress's work is "…less intensely disquieting than slightly unsettling, like the portraits in the hallways of Disneyland's Haunted Mansion, which turn holographically to follow visitors' every move… Here, though, the costumes and characters and creatures in the pictures look almost friendly: softish and colourful, moving at the nonthreatening, soporific half-speed of most young children's television programming."

Bress painstakingly constructs every aspect of each work, employing a variety of techniques and materials in his hand-made costumes, masks, and even scenery. Figures are adorned with wigs, collage masks, foam rubber suits, and painted costumes. They contrast or sometimes blend in, like a "where's Waldo" (where's Wally) effect, with carefully composed, stage-like settings that range from scenic landscapes to the imagined interior of a constructivist painting.

The five video portraits comprising Interventions: Brian Bress will be displayed throughout the Museum—from the public areas to the permanent collection galleries. The artist will also present a special new portrait based specifically on paintings in the Santa Barbara Museum of Art's 19th-century European collection, where his work will speak to masterpieces by Claude Monet, Odilon Redon, Vincent van Gogh, and others.

Bress received his MFA from the University of California, Los Angeles and BFA from Rhode Island School of Design. Recent solo exhibitions include Status Report, screened at The New Museum, New York (2012), as well as Under Performing at Cherry and Martin (2012). In the past two years, his work has also been included in group exhibitions at the Museum of Contemporary Art (North Miami, FL), the Institute of Contemporary Art (Philadelphia, PA), Arthouse (Austin, TX), the Parrish Art Museum (South Hampton, NY), and the University of South Florida Contemporary Art Museum (Tampa, FL), among others. His video Under Cover, 2007 was included in the landmark exhibition California Video in 2008 at the Getty Museum, Los Angeles, and the accompanying catalog, California Video: Artists and Histories.

Related programming:
Thursday, September 13, 5:30pm
Film Screening: Creative Ideas for Every Season
Artist Brian Bress will introduce and screen his 2010 video as part of the ongoing conversation between his work and art in the Museum's permanent collection.