Heat of Shadows. On view a trio of her large-scale video installations, which grew out of her interest in capturing lost memories and the collective unconscious. The exhibition includes a series of Lim's wearable sculptures. 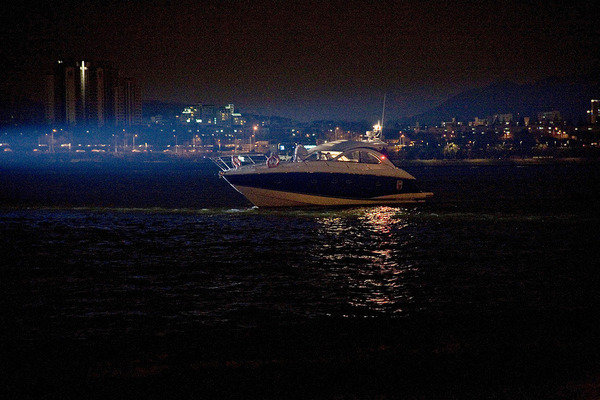 Minouk Lim engages with the arteries of city life —the streets— to create poignant artworks that speak to individual alienation amid Seoul’s rapid development. Merging performance, video, and documentary, the work of this Korean artist has been shown in increasingly wider circles since she was awarded the Hermes Korea Art Prize in 2007 and the 1st Media Art Korea Award in 2010.

For her first in-depth US solo museum exhibition, the Walker presents a trio of Lim’s large-scale video installations, which grew out of her interest in capturing lost memories and the collective unconscious. In New Town Ghost (2005), a slam poet with a megaphone raps from the back of a truck as it drives through a “new town” project in Seoul, deriding its indifferent citizens. S.O.S—Adoptive Dissensus (2009) follows nighttime passengers on a Han River cruise boat who encounter performances staged along the riverbanks. An infrared camera records the warmth emanating from “pilgrims” traveling to restricted construction sites in The Weight of Hands (2010).

Along with these immersive multidisciplinary works, which speak to the human cost of modernization, the exhibition includes a series of Lim’s wearable sculptures commissioned by the Walker. Using thermofoam, a plastic sculpted by heat, and a variety of other synthetic and natural materials, she conceived these works as protective, totemic shields for use in an imagined apocalyptic landscape. On the exhibition’s opening night, Lim and Minneapolis-based dancer/choreographer Emily Johnson will incorporate the works in a performance based around themes of nature, myth, and civilization.