Timed to coincide with the 2012 American election season, the exhibition features seven solo shows and twelve artist's projects that approach both the nature of the United States as a country and 'united states' as the alliance of separate forms, entities, or conditions of being. 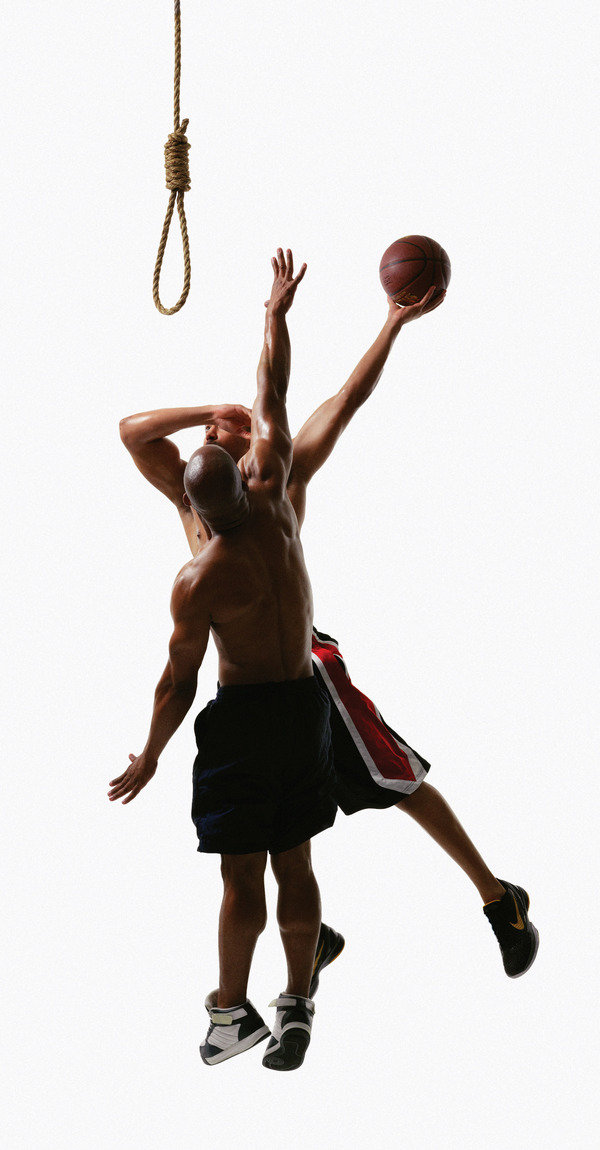 A semester of seven solo exhiitions and twelve artist's projects that approach both the nature of the United States as a country and "united states" as the alliance of separate forms, entities, or conditions of being. Timed to coincide with the 2012 American election season, united states is presented at a time when political and social divisions in this country are readily apparent, and polarization on many major issues is at an historical high.

Spanish-born, New York-based artist Pedro Barbeito presents paintings influenced by images of war, primarily drawn from American news media. For Barbeito, these works address the formative role violence plays in contemporary life; from a political ethos driven by "terror" and deception, to the aesthetics of visual assault prevailing in popular culture. Barbeito's paintings represent our current world, and explore the relationship between digital imaging, culture at large, and the history of painting. These works are particularly informed by the artist's interest in the traditions of popularized depictions of violence, from early superhero comics to video game imagery to movies and television shows.

Jonathan Brand: One Piece at a Time
On view through September 30, 2012

Artist Jonathan Brand grew up on the Canada/Michigan border, where his grandfather built auto assembly lines. In college, Brand sold a 1969 Mustang he restored with his father, but the memory of the car lingered on, and in 2010 he decided to re-create the vehicle full-scale from photographs. One Piece at a Time pays homage to Johnny Cash's song about an assembly line worker's fantasy of owning a Cadillac by removing one auto part at a time, stashed in his lunch box, to assemble at home. Brand re-created his car, one piece at a time, with computer software, paper print-outs, and glue.

Brody Condon:
To prove her zeal one woman ate mud.
On view through February 24, 2013

Brody Condon's work addresses the over-identification with fantasy prevalent in American culture. With that in mind, Condon designs performances that utilize live action role-playing techniques whereby he creates and populates temporary communes. While living at a site in Wassaic, NY, his group critically explored the relationship between fictional worlds, the history of radical Protestantism, and the political and cultural foundation of this country. The video on view at The Aldrich presents the artist's rendering of this imagined world, while a second recording makes public for the first time Condon's workshop procedures and process.

This installation presents 100 small figurative sculptures that reflect both the artist's Native American roots and his life in the creative community on New York's Lower East Side. The series began in 1985 during a Hudson River Valley fishing trip, when he cobbled together doll-like sculptures out of detritus like wire and rubber found in a local workshop. The work continued and the collection grew, until in 2012 he decided to unite the dolls on a large table-like construction resembling the Pow Wow float, a celebratory vehicle featured in parades on Native reservations in the American West. Although it pointedly references the katsina and other Native forms, Bowery Nation equally reflects Kahlhamer's early career as a cartoonist and the multicultural milieu of the Bowery, his home since 1990.

In 2006, Knep was invited to produce a work for Harvard University and chose as his location Memorial Hall, erected in 1870 in remembrance of Harvard students who died in defense of the Union during the Civil War. Knep's work consistently deals with technology that mimics biological processes—particularly healing—and Harvard's lack of acknowledgment of its seventy one graduates who died for the Confederacy pointed to a schism so deep that it still profoundly affects the American psyche. Knep's interactive video installation has been reconfigured for The Aldrich to coincide with both united states and the 150th anniversary of the Civil War (1861–65). Walking across the work's projections disrupts semi-transparent "skins," revealing information about the Harvard alumni who died for the Confederacy.

Erik Parker: Too Mad to Be Scared
On view through February 24, 2013

This exhibition focuses on Parker's lyrical maps, which present and document a timely, poignant, and thoroughly critical overview of the often obscure social, economic, and political dynamics of the United States. As he condemns the status quo, Parker condenses his narratives in tight word clusters, engulfed by cartoony looking visceral shapes. Using the US map as template, he spells out the dynamics of the counter-culture, underground movers and shakers, and marginalized communities in order to "finally put them on the map." Parker comments on our times and what he sees as distortions of everyday reality, through vivid spectacles filled with humor and wit, in the hope that his work will form the basis for a colorful art of resistance. An illustrated monograph, co-published by The Aldrich Contemporary Art Museum and Rizzoli, will accompany the exhibition.

Over the past decade, Thomas has created a body of work that provocatively explores the way popular and consumer culture represents African-American identity and history. Taking its title from the song about lynching popularized by Billie Holiday, Strange Fruit brings together four large-scale photographs and a video work whose subject is the way sports, specifically basketball and football, connect present-day black experience to a continuum of racism in America. Thomas's framing and recontextualization of familiar sports activities reveals the pervasive underlying structures that help define both black male identity and the systems governing the broader athletic culture in the United States.

Jane Benson
Performance, July 15, 2012
The Splits: Red/Blue is a performance about division and how it yields opportunities. "1/2 + 1/2 = 3," written by Alex Waterman, is a duet for one cello that has been bisected, with each half then played simultaneously by two musicians in different locations utilizing video simulcasting technology—in this case Loren Dempster in absentia in Virginia, a "Red State," and Waterman live at The Aldrich in Connecticut, a "Blue State."

Alison Crocetta
On view through February 24, 2013
An American Sign Language interpreter gestures in the video installation Bear in Mind (The Bill of Rights), as we hear audio of the ASL "gloss" used to convey complicated spoken texts. Together the multiple acts of translation complicate our understanding of this essential American text.

Celeste Fichter
On view through February 24, 2013
Pieced together from YouTube videos of children phonetically reciting the Pledge of Allegiance, the work Pledged challenges notions of patriotism, education and political indoctrination.

Erika Harrsch
Performance, November 2, 3, and 4, 2012
Harrsch's interactive passport office will operate at The Aldrich during the days leading up to the presidential election. Visitors may apply for a passport for the United States of North America as they engage in a dialogue about immigration and identity.

Nina Katchadourian
On view through November 11, 2012
Monument to the Unelected consists of fifty-six political lawn signs for failed presidential election campaigns. Installed in front of the Museum on Ridgefield's Main Street, this ambiguous installation represents a visual record of our collective road not taken.

Matthew Northridge
On view through February 24, 2013
Northridge often plays with geographic re-contextualization and extreme shifts in scale; for Rio Grande he has carved directly into The Aldrich's wall the contours of this iconic river, which he calls "an American Rubicon."

Risa Puno
On view through September 30, 2012
The participatory work Good Faith and Fair Dealing borrows its name from contract law and uses it as the solution for the only way two players can successfully navigate Puno's game-like installation of side by side labyrinths.

John Stoney
On view through February 24, 2013
You Can't Go Home Again is a scale model which brings together Niagara Falls and Moby-Dick, two symbols of the nineteenth-century notion of the sublime, to explore the prevalent contemporary sense of disconnection from the natural world.

Sui Jianguo
On view through September 30, 2012
The large-scale sculpture MADEINCHINA is the culminating product of Sui's long-time efforts to divorce his artistic practice from a need for self-expression, so as to reflect a globalized market economy.

Frances Trombly
On view through February 24, 2013
The completely white and deceptively simple work American Flag—made of hand-woven and embroidered fabric—recombines rich art historical references into a contemporary object that posits questions of value as either inherent or extrinsic.

Rosemary Williams
On view through September 30, 2012
Supermarket makes evident what is hiding in plain sight on the shelves of every US grocery store. This photographic installation portrays common ground in America as what we eat and what we buy.

Jenny Yurshansky
On view through February 24, 2013
Projection (I Have a Dream) consists of printed reproductions of Martin Luther King's iconic speech. Instead of offering his inspirational words, the artist provides only the spaces they would occupy on the page and the punctuation marks that shaped this now famous oration.

Image: Hank Willis Thomas, And One, 2011. Courtesy of the artist and Jack Shainman Gallery, New York

The Aldrich Contemporary Art Museum
258 Main Street, Ridgefield, CT 06877
Hours
* Tuesday to Sunday, 12 noon to 5 pm
* NEW! Summer Saturdays; July 7 through September 1; 10 am to 5 pm
* Closed Mondays and New Year's Day, Thanksgiving, Christmas Day, Easter Sunday, and the Fourth of July
* Open Memorial Day and Labor Day
* The Museum posts weather alerts on the Home Page, Facebook, and Twitter.
NEW! Summer Saturdays: Open 10 am to 5 pm on Saturdays from July 7 through September 1. Celebrate the season with unique programs and activities for all ages. Participate in hands-on art-making projects inspired by exhibiting artists, explore the Museum's Sensory Garden, and join us for special events outside in the Sculpture Garden and in the Education Center. Download brochure.
Admission
* Adults $7; seniors (60+) & college students $4
* Members, K-12 teachers, and children 18 & under FREE
* FREE admission on Tuesdays
* FREE docent-led tours with the price of admission on Tuesdays and Sundays
* FREE family activities with the price of admission on Saturdays and Sundays
* FREE on-site parking
* FREE admission to shop at the Museum Store
* FREE entry for active-service military families