Over the last twenty years, more than 140 artists from around the world have come and worked at Adriano Berengo's furnace in Murano. This is a comprehensive analytical and critical view that looks beyond the boundaries of glass, a material that until now has been imprisoned by cliches and confined to limited scopes and uses. 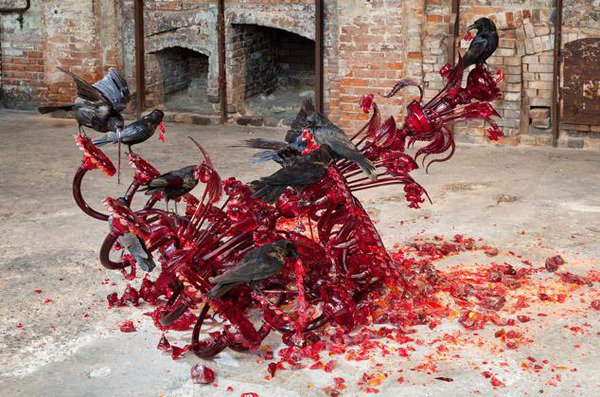 Conceived and curated by Adriano Berengo

The Glasstress project offers a comprehensive analytical and critical view that looks beyond the boundaries of glass, a material that until now has been imprisoned by clichés and confined to limited scopes and uses. The project was conceived by Adriano Berengo, a Venetian cultural entrepreneur and the founder of Berengo Studio 1989 and Venice Projects, endowing Murano glass with a new and innovative image. Through this ambitious project, glass has been freed from the Venetian tradition of decoration and functionality, and has become a dynamic material used to create contemporary art. To achieve this objective, Berengo Studio regularly invites established and emerging artists to work alongside master glassmakers, encouraging them to interpret their works in glass.

Over the last twenty years, more than 140 artists from around the world have come and worked at the Berengo furnace, making their contributions to the realization of this ambitious project. Thanks to this uniqueness, Glasstress debuted in 2009 as a collateral event of the 53rd Venice Biennale of Art; it returned in 2011 for the 54th Venice Biennale. Following up on these great successes, Glasstress has become a traveling event hosted by such major international museums as the Millesgården Museum in Stockholm, the Latvian National Museum of Art - Rīgas Birža, Latvia, and at New York’s Museum of Arts and Design (MAD) in February 2012. On May 31st, 2012, Philippe de Montebello, the former director of the Metropolitan Museum of Art in New York, introduced, with the following words, the Glasstress New York exhibition to the American TV audience of NYC-ARTS Primetime: “For hundreds of years, glass has been viewed by some as simply a decorative or functional medium, Glasstress New York on view at the Museum of Arts and Design shatters those notions. Here you will see dynamic new glass works from both established and emerging artists, architects and designers from around the world.” Glass has now officially entered the world of contemporary art owing to the contribution of Glasstress