Trembling Time. Bartana takes the minute's silence on the national day of commemoration for fallen Israeli soldiers as the point of departure for examining the effects of collective commemoration and military celebrations on the thinking of the individual. 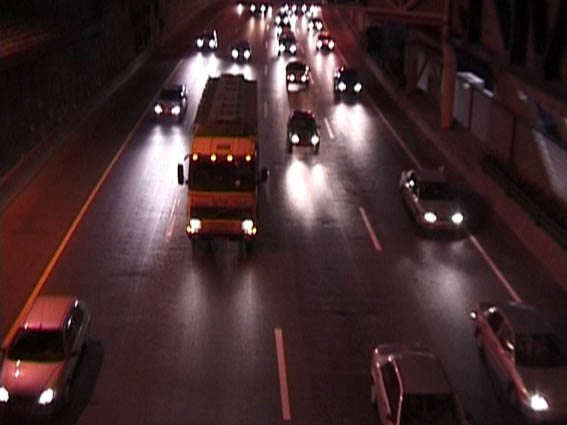 Gallery On The Move presents Yael Bartana’s “Trembling Time” in collaboration with The Promenade Gallery in Vlora. In “Trembling Time” (2001), the road is full of stationary cars, all facing the same way, the occupants are getting out to stare motionlessly into the distance, where they will be going. Waiting until they can drive on, until they can continue their journey. The traffic starts to flow again, and then stops once more, but the motion is unavoidable. The people are on their way as part of an endless stream. Bartana takes the minute’s silence on the national day of commemoration for fallen Israeli soldiers as the point of departure for examining the effects of collective commemoration and military celebrations on the thinking of the individual. For many minutes, the viewer does not see much more than blinding headlights, and cannot make out any of the drivers. But suddenly, as if halted by some unseen hand, the cars stop. People get out, stand next to their vehicles, and sink their heads. Bartana filmed the sequence in slow motion and manipulated her footage so that vehicles appear to vanish or to trail ghosts of themselves. This pacing and blurring lend the work a dreamlike quality which eschews literal representation and allows a consideration of the meanings and functions of the ritual depicted. As the film itself seems to tremble, it becomes a metaphor for the way Israelis cease to be individuals isolated in their vehicles and become citizens united by shared experiences of loss and threat – and paradoxically, by a resulting sense of isolation.

Yael Bartana was born in 1970 in Afula (Israel). Lives and works Amsterdam, Berlin and Tel Aviv. Her artistic practice includes film, photography, video and sound installation. After graduate studies at the Bezalel Academy of Arts and Design, Jerusalem and the School of Visual Arts, New York, she frequented the Rijksakademie in Amsterdam. She has had numerous solo exhibitions: Moderna Museet in Malmö (2010), the Museum of Modern Art in Warsaw (2009), PS1 in New York (2008), the Center for Contemporary Art in Tel Aviv (2008), the Kunstverein in Hamburg (2007) and the Van Abbemuseum in Eindhoven (2006). She has also participated in such prestigious group shows as Manifesta 4, Frankfurt (2002); 27th São Paulo Biennial (2010 and 2006) and documenta 12 in Kassel (2007). In her Israeli projects, Bartana dealt with the impact of war, military rituals and a sense of threat on everyday life. Since 2006, the artist has also been working in Poland, creating projects on the history of Polish-Jewish relations and its influence on the contemporary Polish identity. Yael Bartana is a winner of numerous prizes and awards: Artes Mundi 4 (Wales, 2010), Anselm Kiefer Prize (2003), Prix Dazibao (Montreal, 2009), Prix de Rome (Rijksakademie, Amsterdam, 2005), Dorothea von Stetten Kunstpreis (Kunstmuseum Bonn, 2005) and the Nathan Gottesdiener Foundation Israeli Art Prize (2007). Yael Bartana represented Poland in the 54th International Art Exhibition in Venice (2011).