Turner is a Brooklyn-based artist who originally trained as a painter but has since expanded his practice beyond the conventions of the medium. Physical negotiations with material and a bold relationship to colour are central to Julia Dault's artistic practice. Hefti relishes the challenge of convincing a factory to go against their usual procedure, asking his suppliers to apply multiple coatings on to the glass creating a highly colourful and reflective sheen. 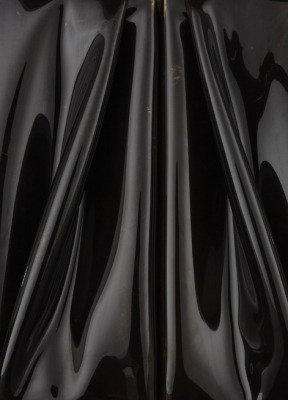 Physical negotiations with material and a bold relationship to colour are central to Julia Dault’s artistic practice. Informed by, but not adhering to, Minimalism, Dault’s richly textured paintings and sculptures suggest fantastical tendencies in their manipulated materiality. Combining surprise and discovery, her paintings are multi-layered illusions that play with our sense of depth by both removing and re-applying paint onto different surfaces.

Dault often incorporates unusual materials such as pleather, silk and spandex instead of canvas as the painting's ground. After building up colour through layers of vinyl and paint, she then exposes these underlying support materials through a process of removal, taking away areas of paint using a plasterers’ comb or other similar utensil. Through these expressive gestures kaleidoscopic patterns emerge, evocative of styles associated with disco and bling. In the painting Jordache (2012), for example, a silkscreen squeegee creates sharp-edged, fan-like gestures that cut away the black paint. Such twists and turns reveal an array of colours beneath the once monochrome surface and document the artist’s rhythmic gestures.

In her sculptural works, always built by the artist on site, string and knots keep the forms fixed to the wall, whilst Plexiglas and Formica bend and fold to create undulating abstract forms that appear ready to burst or collapse at any moment. The sculptures have a potential energy that encourages viewers to navigate open space while still engaging in a closer relationship with their construction. Each sculpture is titled with a stamp documenting the amount of time it took to complete; each work is contingent on Dault’s strength and energy at the time. The sculptures, much like the paintings, document Dault’s bodily engagement with the material, her mark always present through colour and form.

The Swiss artist Raphael Hefti plays the part of a modern-day alchemist or pseudo-scientist who seeks transformative reactions in his chosen materials. His natural curiosity aims to push a process, whether it is manually or industrially produced, to a point where technically it would be deemed a failure. Hefti's process of creating extreme effects creates a palpable and exciting tension in his work between the sublime and the hazardous.

For his recent exhibition entitled ‘Addition as Subtraction’ at Camden Arts Centre, for example, Hefti created a series of mirrored panels that are made from ‘museum glass’, which is used to defract light and prevent reflections. Here Hefti relishes the challenge of convincing a factory to go against their usual procedure, asking his suppliers to apply multiple coatings on to the glass creating a highly colourful and reflective sheen. Enjoying not only subversion its own material, the work also celebrates the chance imperfections, optical effects and tonal variations that are the result of Hefti’s intervention into the normal production process.

For his ‘Inside the White Cube’ exhibition, Hefti has made his largest ‘Lycopodium’ photogram to date, produced in three, six metre-long stretches. Made in a pitch black underground storage facility, Hefti documents his movements across the photo-sensitive paper by maximizing the exposure lighting spores of highly flammable ‘Witches Moss’ or ‘Lycopodium’, a plant with historical links to both early photography and the occult. The image unifies to create an action-based work comparable to Andy Warhol’s seminal 'Oxidation' paintings, but one that records a five hour trajectory of light emitted in a wondrous nebula of chromaticity.

Installed opposite this photogram is a series of industrial steel beams that have been repeatedly exposed to such intense temperatures that they have combusted, charred and shattered. The beams, now transformed into sculptures, have had their very function of alloy strength and rigidity removed. As Hefti explains, "I like the idea of a material being subverted. I think that through intervention, a functional material can become ‘un-functional’."

Raphael Hefti born 1978 in Biel Switzerland lives and works in London and Zurich. In 2011 he received an MFA from the Slade School of Fine Art, London. Recent solo exhibitions include Camden Arts Centre, London (2012) and SALTS, Basel (2012). He was included in the group exhibitions ‘How to Work (More For) Less’ at the Kunsthalle Basel (2011), ’Minimal Myth’ Museum Boijmans in Rotterdam (2012), and in 2012 he won the Swiss Art Award national prize. Raphael Hefti is represented by Ancient & Modern, London.

North Gallery, Inside the White Cube

Daniel Turner is a Brooklyn-based artist who originally trained as a painter but has since expanded his practice beyond the conventions of the medium. In fact, his conceptual work questions the spatial dimensions of the picture plane and the ephemeral nature of painting itself. In 2006, for example, Turner burnt all the paintings that he had produced since 1997 in an action entitled Burning an Entire Body of Work and, out of their transformation into ashes, a new body of work emerged that captured this process of dissolution.

In Turner’s work there is an inventive and physical use of industrial materials – from kerosene, charcoal, soot and rust; the raw products of burning, oxidization and corrosion. Originally from Portsmouth, on the coast of Virginia, he recounts the significance of his upbringing and of helping his father, a scrap metal merchant, who worked in the city's industrial dockyards: “I worked alongside my father for years salvaging and recycling scrap metals. Around the same time I was trying to engage this process through means of a two-dimensional plane. Eventually this made less and less sense to me, leading me to the actual breaking down of the material at hand. The alchemical and ephemeral properties of materials and their polar opposition to the framework of a seemingly sterile environment continue to interest me today.”

Turner captures a similarly transformative process in a series of 'paintings' entitled ‘5150’. These wall-based works, encase bitumen emulsion between two sheets of transparent vinyl mounted onto wood. The vinyl seals the bitument inside so that the liquid never fully solidifies, creating a sense of perpetual movement within the work. Turner uses tar or Bitumen, both black oils and viscous, since they are a naturally occurring by-product of decomposed organic material and have been employed for centuries in diverse uses ranging from sealants for buildings to medical ointments for skin.

As a guard invigilating at the New Museum in New York, Turner observed how the accidental scuff marks left by visitors on the sacred walls of the ‘white cube’ became traces of their unique encounters with that space. From this experience he developed a series of site-specific wall rubbings using steel wool which the critic, Bozidar Brazda described as “a contemporary sfumato painting”. Almost a metaphysical imprint, these cloud-like drawings create a heightened temporal and physiological effect within the space, marking both the presence and absence of the artist's body.