With and By Nature. New Photographs. The historical photographs and films of Alfred Ehrhardt are shown together with works by contemporary photographers addressing the concepts of nature and the natural. He constructs an image of nature that appears puzzlingly alien, although it is compiled of recognizably natural forms. 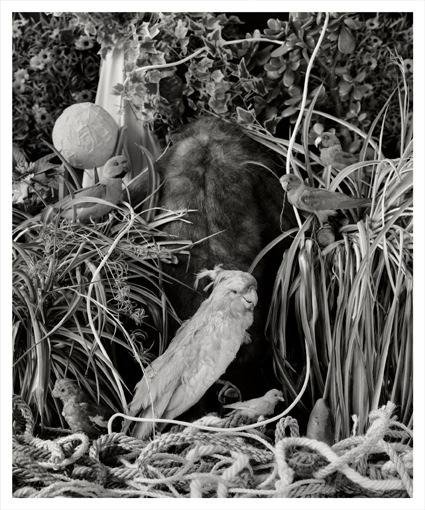 Hartmut Neumann’s abstract, sculptural, utopian, and staged view of nature offers an inherent frame of reference for the works of Alfred Ehrhardt, which the artist used as a basis when conceiving this exhibition specifically for the Alfred Ehrhardt Foundation. Neumann thus makes a new contribution the dialogical approach underlying the foundation’s exhibitions, in which the historical photographs and films of Alfred Ehrhardt are shown together with works by contemporary photographers addressing the concepts of nature and the natural.

Hartmut Neumann creates assemblage-like compositions of taxidermized animals, plant elements, natural materials, and man-made objects—visual worlds of alarming artificiality. He constructs an image of nature that appears puzzlingly alien, although it is compiled of recognizably natural forms. He creates absurd visual environments vacillating between abstraction and representation. Stuffed finches and titmice hide in ice grottos made of sprayed mounds of building foam; parakeets breed in front of a wall created out of plastic plants and animal fur. Styrofoam balls and plastic rings mutate into a stellar constellation within a deep black cosmos. A focus of the exhibition is works dealing with the theme of the cosmos. Both in his paintings as well as his photographs, the artist constructs extraterrestrial worlds of forms and objects, whose cosmological sensibility emerges from the relationship between the gathered objects. Once Neumann has photographed his arrangements, these compositions are then destroyed and are thus only preserved via the medium of photography.

The sheer inexhaustible wealth of his formal repertoire is based on the notion of the chamber of art and curiosities, the Wunderkammer, in which “artificialia” and “naturalia” are shown side by side to suggest a microcosm of the universe. Also natural-historical dioramas and illustrations of nature in historical reference books have inspired the artist’s formal language. His own collection of taxidermized animals, compiled over decades, serves as a source of motifs, which are then enhanced by additional props of natural origin, a wide variety of objects made from different materials, and many everyday objects. Neumann’s enigmatic compositions are characterized by opulence and an exuberant wealth of detail. Conveying a rare sense of madness, his theatrical natural scenarios make a deep impression. Shaped by preparators, the skins, feathers, and furs of dead beings convey a feeling of the uncanny. The animals’ staring gazes, their mangy fur, the immobility of their animated poses intended to suggest natural movement as well as the frozen nature of the photographic image—all this make us shudder. The artistic composition of these natural artifacts keep the dead alive like a relict and infuses them with a second, artificial breath of life.

The utopian gardens populated by native and exotic animals describe a paradisiacal world void of human kind. The artist becomes a (re-)creator or worlds, and herein manifests the oldest contest between the artist and the hand of nature. However, Neumann’s incredibly fascinating and unsettling images are anything but representational renderings of nature or images of an untouched natural paradise. These are artifacts and constructions, which foreground a sense of artificiality through the media of painting, graphic works, sculpture, and photography. In 1999 Stephan Berg wrote that Neumann “has a boundless interest in turning everything, completely everything, into painting, thus completely sacrificing scale, proportion, and painterly convention,” and the same applies in the reduction of his sculptural object-assemblages to the two-dimensional black and white surface of the photograph. Photography offers him the freedom to examine apparently suspicious topics without constraint and without deferring to visual convention.