& intellectual perfidy. This exhibition presents a selection of African video art that stands beyond the cliches that remain associated with the dark continent and the postcolonial image. 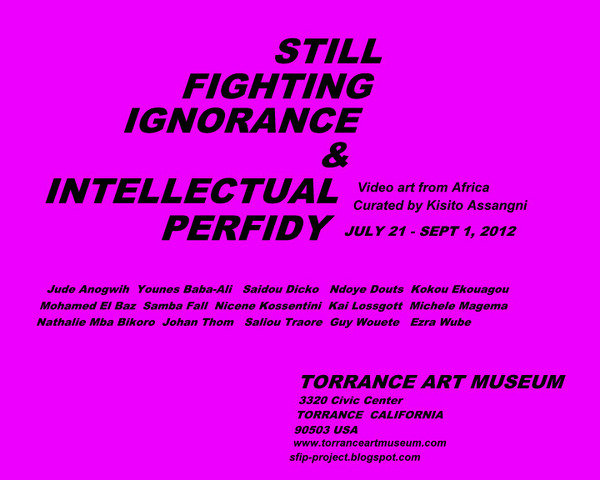 Project [SFIP] is a multi-national exhibition process and a platform for critical thinking, researching and presenting African video art.

The technocultural revolution has democratised cultural and artistic practice through everyday access to new media. At the same time, the pervasive presence of technology in our lives has raised questions around privacy, surveillance and ownership, the dominance of Western media in globalisation, as well as the privilege of access in the developed world. The [SFIP] network is dedicated to the diffusion of new experiences worldwide through film and video. It is unfortunate that contemporary African art remains largely associated with sculpture and painting. Much work remains to be done in adequately researching the creative energy of the continent, especially within the last decade.

This exhibition presents a selection of African video art that stands beyond the clichés that remain associated with the dark continent and the postcolonial image. It seeks to bring viewers closer to idiosyncratic readings of African video art and its thematic concerns which are largely ignored. ‘Still Fighting Ignorance & Intellectual Perfidy’ contextualises African video art within a larger cultural framework.

Reflecting an age of inter-cultural migration, [SFIP] presents African video artists who live in Africa, Europe and USA whilst providing a meeting point for knowledge and interest in the relationship between self and society. Most works address issues of alterity, identity, tolerance and social relationships as artists reflexively consider their sense of place and belonging in an increasingly interconnected world.

From experimental video to short film, this show focuses on aesthetic and methodological perspectives of fighting ignorance and intellectual perfidy in contemporary African art. The project tells Africa's story by African new media artists as seen through the lens of the relation between tradition and modernity.