Dreams of the Invisible. In these new photographs, Kwon's female forms are shown partially, as if suggested rather than described. 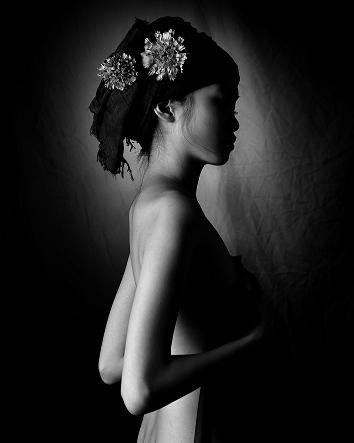 Min Kwon’s Corpus Feminae comprises his theme but as opposed to Robert Mapplethorpe’s concerted investigation of binary relationships, Kwon attempts to capture the illusive quality of his imagined subjects. Kwon is one of the new avant-garde artists emerging from Korea on the global scene and as such, his work is engages issues not usual for Asian artists a few years ago. The artistic themes of Asian artists until very recently had to do either with religious philosophy seen in many Buddha figures, binary relationships seen in images of dualist subjects and media such as dark/light, smooth/rough, or playful/serious. In the alternative subjects treated the rituals and traditions of a given area such as Korea for example so that local scenery likes the Kumgang Mountains. However, in recent times Asian artists in their globalization process are speaking from a personal perspective using biography like Nikki Lee or focusing on the body like Min Kwon.

In general the focus on the body is common to Greek art that has influenced the western perspective. However, whereas the Greeks focused solely on the body and omitted landscape elements except as seen synechdochically the Romans loved to depict organic backgrounds. And although Kwon’s women are also draped, they are far from being Classical, as Kwon’s restricted palette is especially effective in conveying the illusory quality of his fantastic images. His nude women are shown in veils, enwrapped by them, woven into them, surrounding them, or rhythmically snaking in and out of their limbs in soft trails of transparent fabric. They are shrouded at times as if trapped in their finery and completely nude at others but never are they banal. Kwon’s women are ciphers of femininity appearing as if in a subtle dream. Kwon contends that reality never lives up to his dream thus he’s always searching to capture and depict the illusive factor that escapes so easily in the waking state. But, after all, isn’t this any artist’s pursuit?

Kwon’s female forms are shown partially, as if suggested rather than described. And in this respect they can be read in terms of fragmentation that allows the viewer to complete the image in his mind’s eye. There is a surreal element about them as seen in Scene IV and V that suggests the dream state. The artist’s titles imply a theatrical or cinematic process as in takes or scenes. Indeed there is a cinematic sense of the unexpected, and the surreal in such of Kwon’s photographs as Scene IV in which he depicts a female attempting to find her way out of a transparent veil. Kwon has certainly captured the spirit of the global milieu with his subtle and mysterious figures that tease the viewer to find his own meaning within them.

Min was born in July 1965 in Seoul, Korea. He graduated from the art department of Kyung-Ki University, Korea. His artistic interests vary from painting, drawing, comic books, to photography. Although he created many photographic works after graduation, his official debut didn’t happen until he participated in the group exhibition “The People Who Encompass the World” in 2009 at the Seoul Metro Gallery. Finally in the fall of 2011, he had a solo exhibition with the title of “Fragmented Memories” at Irum Gallery, Chungmoo-ro, Seoul, Korea.