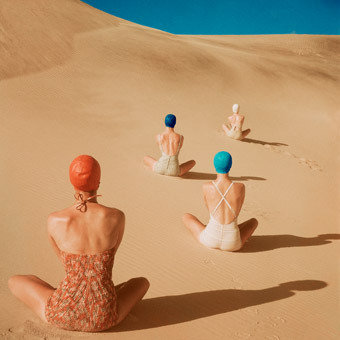 From August 18 to October 28, 2012 C/O Berlin, International Forum For Visual Dialogues will present the exhibiti- on Timeless beauty . 100 years of fashion photography from Man Ray to Mario Testino. The opening will be held on Friday August 17, 2012, at 7pm in the Postfuhramt in Oranienburger Straße 35/36 in Berlin-Mitte.

Seductive, provocative, commonplace, eccentric and above all powerful – for some time now fashion photography has no longer merely been contract work or aestheticising documentation. It has become a unique opportunity for experimentation, between commerce and creativity, mainstream and subculture, industry and art. Although its essence and the way it is implemented may seem paradoxical, since the beginnings of photography it has been an important part of our visual culture. Like no other genre, fashion photography not only records the zeitgeist of the respective decades, as well as individual desires and social dreams but it also influences, inspires and calls for par- ticipation and emulation. What scope for a sociological approach! The legendary publisher Condé Nast recognised this tremendous effective force very early on and created a style for magazines such as Vogue and Vanity Fair that still has an impact today. It is his publications that first elevated haute couture to the level of art. With his keen sense for discovering new talents he found the best photographers and promoted the careers of the most renowned fashion photographers and in this way had a long-term influence on a whole artistic genre.

No other segment of photography has constantly generated new images to such an extent, continuously reinventing itself. In fashion photography, a new pictorial language and aesthetic was often tried and tested for the first time, closely linked to the further development of technology. Interestingly, since the beginnings of fashion photography, the object itself, fashion, has increasingly shifted out of the focus. Instead, the visual language of the photographer has become more and more dominant, opulently staged pictorial compositions and visual designs have become increasingly significant and the importance of the models has also greatly increased. Hence it was no longer sufficient to produce pure fashion photographs – there was also a need to develop innovative, distinctive styles, trends and images, introduce new themes and break with taboos. On the other hand, the boundaries between commercial pho- tography and artistic practices have become much more blurred – and the works of classical fashion photographers are now being traded at high prices.

The publishing house Condé Nast opened its archives in New York, Paris, London and Milan for the first time, provi- ding an insight into a photographic collection of paramount quality. The exhibition provides a representative overview of this genre and traces the development of fashion photography – from the classic compositions of the founding fathers such as Edward Steichen and George Hoyningen-Huene to the experimental photography of Erwin Blumenfeld and Irving Penn, from the sexualisation and voyeurism of Helmut Newton and the cool elegance of Peter Lindbergh through to the most recent works by Mario Testino and Tim Walker. It not only presents fashion photographs but also the history of the publishing houses and the establishment of a medium and its transformation. The exhibition also includes works by Cecil Beaton, Man Ray, Diane Arbus, Horst P. Horst, William Klein, Sa- rah Moon, Albert Watson, Herb Ritts, Bruce Weber, Corinne Day, and Nick Knight among others.

Since being founded in 1909, the Condé Nast publishing house has not only established print media such as Vogue, Vanity Fair and Glamour but has also contributed to shaping the appearance of fashion and people for more than 100 years. As a result of this long period of publishing activity, a vast amount of photographs have built up in the archives of the publishing house. These were not disposed of as a result of the establishment of digital media but have remai- ned a unique source, serving as a basis for this exhibition. In fashion photography there is no archive that is able to highlight the roots of this genre with such diversity, depth and global perception.

The curator Nathalie Herschdorfer drew on this substantial, historical stock and put together the essence of 100 years of fashion photography – from rare, early photographs to spectacular contemporary works. The exhibition includes more than 150 prints as well as original magazines that have never been exhibited before. A catalogue will be published by Prestel to accompany the exhibition.