One of the world's largest international art festivals, held every three years in the Echigo-Tsumari region, encompassing Tokamachi City and Tsunan Town in Niigata Prefecture. Environment, climate and nature are interpreted by approximately 160 artworks by artists from all over the world; "humans embraced by nature", has become the overarching concept for every program. 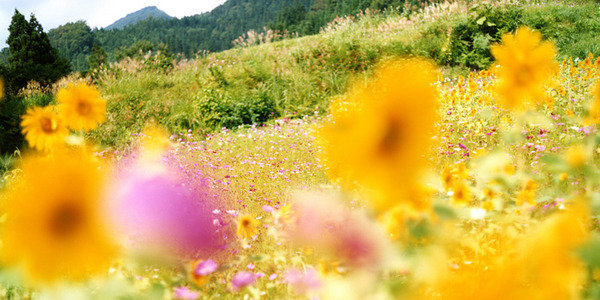 As our civilization reaches a critical juncture, the rich nature of the satoyama existence in Echigo-Tsumari can impel us to review our attitude to the environment, calling into question the modern paradigm which has caused such environmental destruction. This is the origin of the concept “humans embraced by nature”, which has become the overarching concept for every program taking place in the Echigo-Tsumari Art Field. Regional development in Echigo Tsumari is advanced with the aim to present a model for how people can relate to nature.
“In summer, cultivate the fields; in winter, cultivate the mind.”

Echigo-Tsumari is known for heavy snowfall in winter. This motivates cultural exchanges based upon the principle captured by the Japanese expression “seikô udoku; kakô tôdoku”, which can be rendered in English as “In summer, cultivate the fields; in winter, cultivate the mind.” Cultural facilities, created by global artists and run by local people, warmly welcome visitors and travellers. In viewing the artworks, the visitor passes through terraced rice fields and forests of native beech, encountering festivals and traditional customs, thereby experiencing the landscapes and cultures of Echigo-Tsumari through all five senses. Through this experience, we recover the memories of an origin that we had forgotten, and develop new links connecting people to each other and to the land.
Satoyama and Art

The twentieth century was the era of the city and the art of the city. However, as the city ailed, art became isolated and gradually lost its latent power to connect people to place and people to people. The nature and lifestyle of the satoyama of Echigo-Tsumari environment seems to inspire artists to recover the connections and collaborations that art once had but which has almost been lost.

Artworks are dotted across approximately 200 villages rather than displayed in a single center, an “absolutely inefficient” approach deliberately at odds with the rationalization and efficiency of modern society. Wandering among artworks which emphasise the beauty and richness of satoyama and reveal the accumulated temporal layers of human inhabitation opens the senses to the wonder of existence and revives the soul.

Approximately 160 artworks by artists from all over the world are dotted across the 760km2 area of the Echigo-Tsumari Art Field. We hope that you will feel and discover satoyama in different seasons via artworks in the fields, unoccupied houses and closed schools.

Echigo-Tsumari Art Center (tbc)
The upper level of Kinare, designed by Hiroshi Hara and one of the key buildings of Tokamachi, will be re-opened as an art center, hosting contemporary artworks interpreting nature, climate and environment of Echigo-Tsumari.
Architect and artists will work in corporation and create a dynamic space where café, specialty shop and a local FM radio station (FM Tokamachi), and art space co-exist and welcome visitors throughout a year.
Walking distance from Tokamachi station and just two hours by train from Tokyo, this place will be an entrance to the Echigo-Tsumari Art Field by holding large-scale installations and staging performances on regular basis.

Australia House
The original Australia House, a platform for cultural exchange between Australia and Japan, was destroyed in earthquake of March 2011. An architectural competition was held to rebuild Australia House in time for the next Triennale, becoming a symbol of reconstruction.

East Asia Art Village
Since the establishment of DMOCA by Cai Guo-Quiang, over the past ten years many artists from East Asian countries have created artworks and deepened their relationship with the inhabitants of Uwano village in Tsunan town.

JR Iiyama Line Art Project
This is an art project that uses artworks to create spaces for interaction, centered the Gejo and Echigo-Tazawa stations of the JR Iiyama Line, which traverses the Echigo-Tsumari region. A train carriage specially designed by artists will run during the Triennale.

Sunday July 29
East Asia Art Village Symposium
East Asia in the World – What does Asia have to say today?
Today, artists from East Asia are globally active as never before. At the same time, however, they continue to occupy a peripheral position in the Western-defined context of the global art world. Many Asian artists position themselves within an “oriental” frame, or are expected to exhibit an “ethnic” orientation from audiences. What does the world want from Asia? And what role should Asian artists, who were once positioned at the edge of the world, play in the international context?
General Director, Fram Kitagawa, will present the vision for the East Asia Art Village within the Echigo-Tsuamri Art Triennale and chair the symposium. The panel includes Huang Du, independent curator, Cai Guo-Qiang, Ann Hamilton, and RongRong&Inri.