The artist tears, paints, bleaches, sands and embellishes materials to create abstract works that reimagine the city and reconfigure the urban landscape. 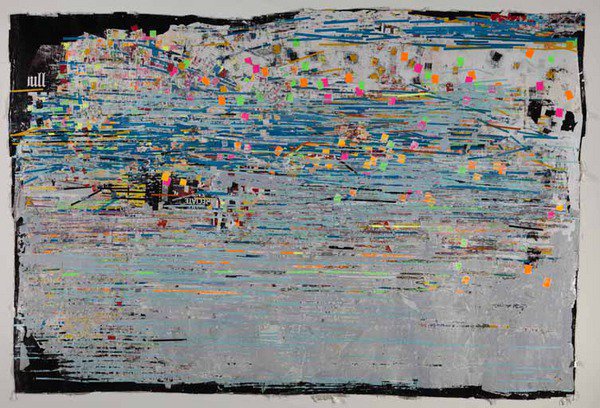 Over the past 10 years, Mark Bradford has emerged as one of the most inventive and accomplished artists of his generation. In 2009 he received the MacArthur Foundation “genius” award and in 2010 a traveling mid-career survey of his work was organized by the Wexner Center for the Arts in Columbus, OH. Bradford is best known for his large-scale, painterly collages and installations that demonstrate his interest in mapping communities and underground economies. His works are largely made from signage and salvaged materials, often taken from the streets of South Central Los Angeles where he lives. He tears, paints, bleaches, sands and embellishes materials to create abstract works that reimagine the city and reconfigure the urban landscape. Bradford incorporates informal business postings, which advertise everything from gun shows to credit repair, and his work speaks to the adaptive nature of merchant culture, as well as offers subtle investigations of class, race and gender in the United States. This is the first installation of Mark Bradford’s work at the Nasher Museum since the 2007 exhibition Street Level: Mark Bradford, William Cordova, and Rodin Rhode.

For more information about the Nasher Museum of Art, members of the media should contact Wendy Hower Livingston, manager of marketing and communications, at (919) 684-3314, or wendy.hower@duke.edu.