Et al. The exhibition offers a sweeping survey of over 100 pieces, with examples from nearly all of his series to date, along with video works, text-based pieces, as well as a number of new pieces, never shown before. 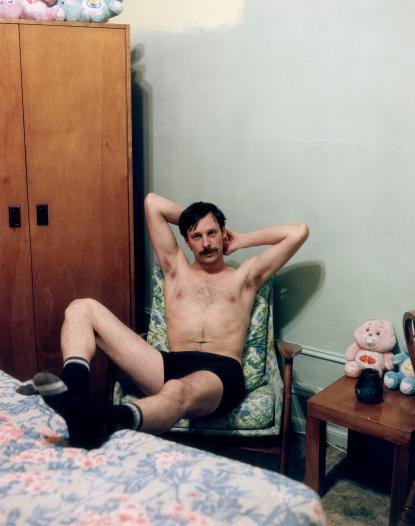 WIELS Contemporary Art Centre, Brussels presents the first institutional solo exhibition of Leigh Ledare (b. 1976 Seattle, USA), offering a sweeping survey of over 100 pieces, with examples from nearly all of his series to date, along with video works, text-based pieces, as well as a number of new pieces, never shown before.

Ledare uses photography, archival material, and text to explore human agency, social relationships, taboos and the photographic in equal turns. Formally trained in photography, this erstwhile assistant of Larry Clark has, in a relatively short time, developed a body of work that is coherent, complex, biting in its intelligence, and decidedly provocative. Ledare's entire project complicates the photographic image's claims to documentary truth, capturing instead the way authenticity, or reality, like identity, is itself a construction. His resulting images are often sumptuous, saturated with color, and surprisingly beautiful. But they also, and importantly, disconcert us, make us uncomfortable, and, in the process, raise questions about the functioning of the image and the construction of subjectivity in contemporary culture.

Ledare has, almost from the start, made work in series form. These distinct but related bodies of work, radiating out from his first project, Pretend You're Actually Alive, a series of photographs of his mother taken over a period of eight years, reveal as much about his particular understanding of subjectivity and intimacy, as about the role of photography and images in general. The images of his aging ex-ballerina mother, who offers herself with disarming explicitness to her son's camera and to the unknown public that will see the resulting images, are perhaps his most subversive photographs to date. They provide a key for understanding much of Ledare's practice, in which transgression is, also, a cipher for a larger reflection on the workings of photography itself: how it mediates identity, relationships, love, loss, and, perhaps above all, human vulnerability. And, further still, a reflection on how the implicit and explicit contracts between individuals inscribe themselves in images.

The exhibition is organized in collaboration with the Kunsthal Charlottenborg, Copenhagen, where it travels after Brussels. In each of the exhibition's two venues, its trajectory is deliberately not chronological. At its core, sits Pretend You're Actually Alive (2000–2008) alongside the various projects that have emerged out of it, including the vast series Double Bind (2010) and the more recent An Invitation (2011), together which reveal not only the range of the artist's practice, but also a set of persistent concerns at its heart. They are also, inevitably, indexes of the relationships of the artist with others—mother, family members, ex-lover, collectors, anonymous patrons, etc.—which, from the start, have played a central role in Ledare's work. It is against this background that the artist chose to call his first institutional solo exhibition Leigh Ledare, et al.

A full color, richly illustrated catalogue accompanies the exhibition. This first catalogue of the artist's output to date, including previously unpublished documents, newly commissioned essays by Elena Filipovic and Nicolás Guagnini, and an interview with the artist by David Joselit, is designed by Garrick Gott and co-published by Mousse, Milan.

Complementary Program of lectures, guided tours, and other events
More info on www.wiels.org