Doubles. 'Everything is reduced to the apparition of a precise contour: a series of black lines stretched out as if cutting the space'. 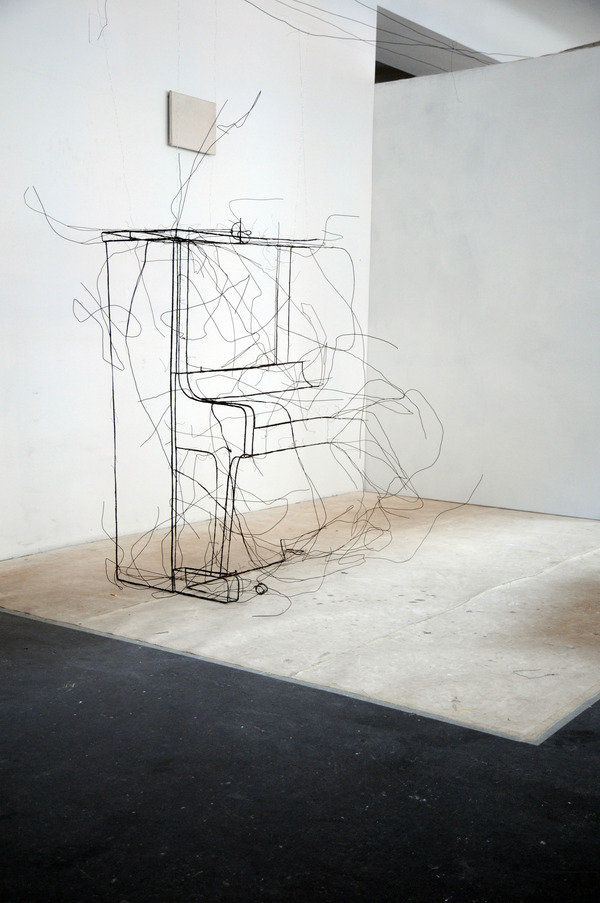 Bare Soul
About the work of Fritz Panzer.

A shelf, a sink, a studio corner, a chair, a piano, some familiar objects. A simple meal, a moment of silence. Everything is reduced to the apparition of a precise contour: a series of black lines stretched out as if cutting the space. The contour alone encloses the form and marks the object's presence. The surface is defined without being materialised. Just like a musical note the piece fills the space without congesting it.

This is the approach of a constructor who liberated himself from every weight, from every materiality, in order to focus on nothing but emptiness and the way a form appears and sustains. Surprisingly, the work of Fritz Panzer still is hardly known in France. This artistic career which has started in Austria in the middle of the 1960s, definitely deserves that we take the time to discover and stay with it for a while: This is what Alberta Pane Gallery invites us to do today, on the occasion of the artist's first solo show in Paris.

A travelling artist (having been a resident of New York, Rome and Berlin, he currently lives in Vienna), Fritz Panzer is born in Judenburg, a small town in the Austrian state of Styria, on March 14th, 1945. At the age of fifteen he starts his studies at the arts and crafts school of Graz. Largely distanced from what he is taught there, he gets enthused over Gestural Abstraction, Informal Art and Tachisme, which he discovers at a happening by painter Mathieu in Vienna.

He continues his studies at the University of Linz before changing to the Vienna Art Academy where he studies until 1971. During a three months stay in New York - where he works in a serigraph studio - he gets to know the works of Warhol, Rauschenberg, Oldenburg and Segal. Upon his return to Vienna he opens a small serigraph studio in a basement where he realises impressions for Attersee and Schwarkogler amongst others. In this period he also discovers the work of Hermann Nitsch. He keeps contact with experimental cineaste Peter Kubelka and poet Reinhard Priessnitz and regularly visits Gallery nächst St. Stephan.

In the early 1970s Panzer starts to produce his first sculptural installations made from carton, sometimes created "live" in event- performances. Occasionally including personages, his work from those days inevitably evokes parallels to sculptor George Segal. Be it a church altar, profane furniture, a sign, everything is treated with the same simplicity, the same direct and meaningful character; such is the reconstruction of the surrounding world in the scale of 1:1. The material's opacity is mirrored by the transparency of his canvases that he sporadically includes in his installations.

He travels, lives successively in Italy, Spain, then California. During all these years the pictorial research prevails over his work as a sculptor. Landscapes, fragments of architecture, objects: restricting his palette to yellowish browns, more and more diluting tones of ochre and white, he combines the effects of perspective with plays of transparency and overlapping. He continuously experiments with the phenomenon of simultaneously seeing a thing and what lies behind.

In 1999 he is invited by the "Berliner Zeitung" to create sort of a "graphical chronic" of Berlin. Every day Panzer realises numerous sketches throughout the city. He often draws in the surroundings of the train station, at tramway stops, close to telephone cabins, in shopping centres or launderettes.

His lines thicken, condense, as if acquiring a sort of corporality. The outlines are hatched, and - a remarkable detail - the architecture, personages, objects become completely transparent, whilst conserving their notion of volume and density. Nothing is hidden any more: we see everything through anything. These sketches and studies will give space to a series of graphical experiments in big format, executed after his return to Vienna. Most often we find ourselves in the studio: a slight bird's-eye view (maybe due to the artist's tall physique), an entanglement of twisted lines; some restarted, some erased (the rubber traces remaining visible), they open and deepen the space.

There are regrets, errancies, traces of inner conflict, as if the contour were an uncompromising opponent, as difficult to grasp as to trace. A washtub, a sideboard, a table etc. With Panzer the object does not adopt any particular meaning. The experience of the primal perception, inducing the entwinement of the different approaches that are painting, drawing and sculpture.

To pull, arrange, bend, disperse: only the thickness of a paper sheet still separates the work of drawing and the work of sculpting. In the course of several months the artist changes from pencil to wire. His structures (drawing-sculptures) develop from now on in an empty space, as virgin and white as a canvas stretched on a chassis. He makes use of thick mat black metal wire around which he wraps small and delicate metal fibres, whose peaks and dents recall his traces of hatched ink or pencil. This is graphical, topographical and photographical at once. Sometimes the lines double, suggesting the passage from one point of view to another. Loose wires oscillate or vibrate gently. In sculpture's technical vocabulary, the "soul" refers to the metal armature that permits to agglutinate and to sustain the matter. Here, the soul is stripped naked.
David Rosenberg
Paris, August 2012
David Rosenberg is a curator and a writer. He regularly organises exhibitions in France and beyond, including "Turbulences" at Espace Culturel Louis Vuitton. He has published numerous works on modern and contemporary art. David Rosenberg teaches Aesthetics and History of Art at University Paris 8.