The First Decade of the New Century. ICI and Performa present an exhibition that is a selection of works by 19 artists from a vast repository of new performance from around the world since 2000. Works by Marina Abramovic, William Kentridge, Clifford Owens, Spartacus Chetwynd and Jerome Bel, among others. 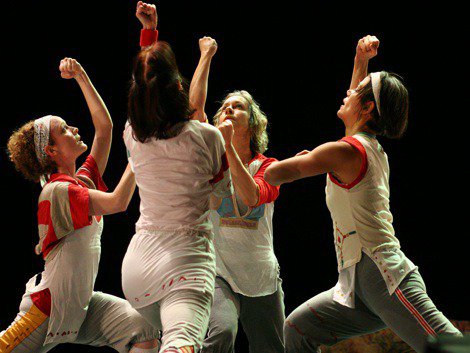 ICI and Performa present the exhibition Performance Now debuting at Wesleyan University's Center for the Arts in the Ezra and Cecile Zilkha Gallery, Middletown, Connecticut, opening on Friday, September 7, 2012. Opening reception on Tuesday, September 11 at 5pm.

Performance Now is a selection of works by 19 artists from a vast repository of new performance from around the world since 2000, a period that has witnessed an exponential growth in the field. More than a century after the Italian Futurists insisted on an increased engagement with their audiences and solicited artists of every discipline to join their cause, performance by visual artists has become central to our understanding of the development of contemporary art ideas and sensibilities.

Bringing together some of the most significant practitioners today, Performance Now surveys critical and experimental currents in performance internationally featuring works by Marina Abramović, William Kentridge, Clifford Owens, Spartacus Chetwynd and Jerome Bel, among others. Exploring the ephemerality of live performance and how this is captured by artists and transformed into new work that contains the power and content of the original, together the selected works are an indication of the extent to which visual artists use performance as part of their creative process; how that process produces objects, installations, video, or photography interchangeably; and how these mediums have been enlivened by the demands of recording performance in innovative ways.

With performance art departments recently being established in many major museums throughout the world and performance recognized as one of the most significant artistic forms of the 21st century, this exhibition provides a window onto these important developments. Performance Now is a series of ongoing exhibitions designed to introduce some of the most exciting projects of performance from 2000 to the present and to generate discussion about the history of performance art. The material is selected from a publication of the same name, Performance Now, by RoseLee Goldberg, which will be published by Thames and Hudson in 2014.

At Wesleyan, the exhibition also extends to a film series, selected by Performa film curator Lana Wilson, a 2005 graduate of the University. Other Wesleyan alumni working in performance art, including Liz Magic Laser '03 (one of the artists featured in the Performance Now exhibit), Aki Sasamoto '04, Arturo Vidich '03, and Danielle Mysliwiec '98, will be panelists at a free seminar moderated by Greta Hartenstein '11 in the Ezra and Cecile Zilkha Gallery during the University's Homecoming/Family Weekend on Saturday, October 20, 2012 at 2pm.

Performance Now is produced by Independent Curators International (ICI), New York, and Performa, New York. The curator for the exhibition is RoseLee Goldberg, Artistic Director and founder of Performa. The exhibition and tour are made possible, in part, by grants from the Horace W. Goldsmith Foundation, and the Andy Warhol Foundation for the Visual Arts; the ICI Board of Trustees; and donors to ICI's Access Fund.