Art after 1989. This exhibition takes this charged moment as a point of departure showcases a range of works from the museum's collection from the 1990s to the present, including sculpture, paintings, photography, drawings, multiples, and installations. 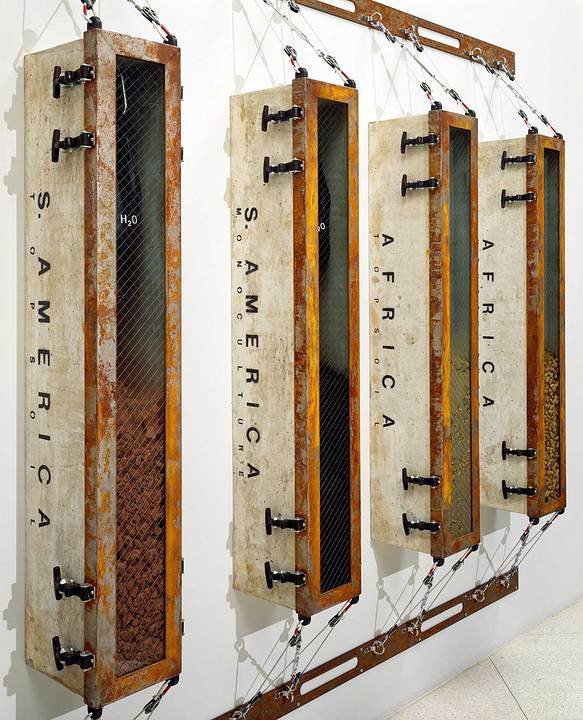 The year 1989 signaled a seismic shift in the international geopolitical landscape. This exhibition showcases a range of works from the Walkerʼs collection from the 1990s to the present, including sculpture, paintings, photography, drawings, multiples, and installations.

The end of the 1980s signaled a seismic shift in our geopolitical landscape. In 1989, we witnessed the historic fall of the Berlin Wall and the dismantling of the Cold Warʼs political order, as well as the quashing of the democratic movement at Tiananmen Square in Beijing. These and other international events ushered in a period of globalization in our systems of power, culture, and economy, creating a transnational flow of ideas, commerce, and technological advancement. Concurrently, the art world responded to this fluctuating terrain by reassessing its centers of knowledge, opening itself to the possibilities of creating new or revised histories.

At the same time, the ideological battles of the decadeʼs “culture wars” culminated in the highly politicized 1989 onslaught against the National Endowment for the Arts; the reverberations could be seen in the work of emerging artists, many of whom began to allow identity, politics, and activism to come to the forefront of their practice. The Living Years: Art after 1989 takes this charged moment as a point of departure, assembling a range of works from the Walker collection, including painting, sculpture, large-scale installations, photography, drawings, and editioned works.

While offering a glimpse into the changing nature of art produced during this period, the exhibition also follows the Walkerʼs recent history. In 1989, the collection was redefined with the establishment of an endowment dedicated to the acquisition of contemporary art. This allowed curators to increase their focus on the work of young practitioners, international developments, and pieces by artists working between disciplines. Many artists emerging in the 1990s—such as Glenn Ligon, Rirkrit Tiravanija, and Kara Walker— would go onto become those acquired by the Walker in depth; others had their first museum exhibitions here; still others participated in residencies and significant commissions. Their activities, and the acquisitions borne from them, signaled a way of building a collection that aimed to keep pace with the art of our time.

On view through 2014, The Living Years is presented as an evolving installation, introducing visitors periodically to alternate works, recent acquisitions, and new means of interpretation. When viewed against the social and political backdrop of the past two decades, as well as the development of the Walker collection, the exhibition aims to allow for change and reexamination of our current moment. These “living years” are a work in progress, as the histories that we have inherited—and the ongoing narratives that artists construct through them—remain to be fully played out.