Shifting Geographies in Contemporary Art. The exhibition explores the hybrid, changing nature of today's international artistic landscape. Installation, painting, sculpture, film, photography, and performance: approximately 70 projects by artists who have created and helped build diverse organizations on a grassroots level in six cities around the world. 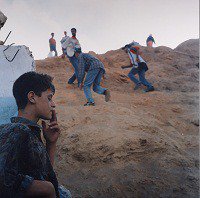 Six Lines of Flight explores the hybrid, changing nature of today's international artistic landscape, presenting work from various communities that provide a unique lens through which to examine artistic production regionally and beyond. Artworks in all media will be presented, including installation, painting, sculpture, film, photography, video, and performance. Featuring approximately 70 works, the exhibition is organized by Apsara DiQuinzio, SFMOMA assistant curator of painting and sculpture.

"Six Lines of Flight convenes artists who have created and helped build diverse organizations on a grassroots level in six cities around the world, presenting works that index the distinctive histories and cultural character of each location," says DiQuinzio. "Through the cultivation of new connections among these disparate regions, the exhibition itself emerges as another cross-cultural platform."

Over the last decade, it has become increasingly apparent that the art world is no longer defined by a few primary art centers, but is now composed of many centers, small and large, that possess distinctive histories, constituencies, and ethnic backgrounds. The exhibition not only seeks out work being made in diverse geographic locales, but also demonstrates the interconnected nature of the international art landscape, exploring artworks from each region in relation to common themes, such as archives, cosmopolitanism, collaboration, the dynamics between center and periphery, and the effects of economic and cultural renaissance.

The title Six Lines of Flight refers to the six featured cities and suggests distinct yet parallel perspectives and patterns of movement. It also draws on the work of French philosophers Gilles Deleuze and Félix Guattari, who coined the term "line of flight" to refer to a pathway leading to new connections, experiences, and forms of knowledge. In bringing together artists whose efforts have established each city's cultural scene, the exhibition explores such pathways and links between them, illuminating the dynamic, global, and collective spirit of 21st-century art.

The exhibition is accompanied by a fully illustrated catalogue, with an introduction by DiQuinzio and essays about each art scene authored by a curator or writer active there. In addition, three thematic essays challenge traditional cultural frameworks and propose various ways of understanding the shifting nature of the local and global landscape, written by Tarek Elhaik and Dominic Willsdon, Hou Hanru and Pamela M. Lee. The publication also includes a roundtable discussion between artists from each city and SFMOMA curators DiQuinzio and Willsdon that was held at the museum in September 2011.

Cities and Artists in Six Lines of Flight

Over the last decade, the art scene in Beirut has thrived due in part to a significant increase in small, local institutions such as the Beirut Art Center founded by Lamia Joreige and Sandra Dagher in 2009. The contemporary art center is devoted to promoting local artists, as well as bringing important international figures to Beirut. The center hosts a wide array of exhibitions, screenings, performances, and educational workshops, and houses a mediathèque—a digital multimedia library that serves as an important archive for about 100 artists from all over the Arab world.

Similarly, the Arab Image Foundation, co-founded by Akram Zaatari in 1997, stores and documents many collections of Arabic photographers who were active in various countries during the 20th century, but would not necessarily consider themselves to be artists and thus remained largely unknown. Like many Lebanese artists working today, the Arab Image Foundation examines notions surrounding the construction of historical narratives, an aspect that stems from the political situation in Lebanon, where war and sectarian violence have fragmented any kind of cohesive notion surrounding cultural identity or history.

During the last ten years, a flourishing contemporary art scene has developed in Colombia, a country primarily associated with violence stemming from the ongoing drug wars and related conflicts with the guerrillas and paramilitaries. It is no surprise that the strife present in many Colombian lives is a critical issue that Colombian artists address in their work. Cali has seen a number of artistic collectives that have helped to establish a vital community, beginning with Ciudad Solar in the 1970s, a formative group that included Oscar Muñoz and Luis Ospina, among others.

Since 1998, the dynamic collective Helena Producciones, formed by Wilson Diaz and Juan Mejia, has organized a biennial performance festival, which has served as an essential platform for many Colombian artists in addition to international artists. In 2005, Oscar Muñoz formed the innovative art organization Lugar a Dudas, establishing an international residency program and exhibition space for Colombian artists that also houses a library and archive, and hosts weekly film screenings.

Over the last couple decades, the art scene in Romania has become one of the most vibrant and active among countries in the former Eastern Bloc. The political history of a country in radical transition continues to be an important subject for those living in the wake of Nicolai Ceauşescu's reign of terror (1965–89) and grappling with its cultural and political identity in the aftermath. Many artists living and working in Romania tell a story of a nation coming to terms with life after totalitarianism.

Since 2000, a number of artist-run organizations and galleries have been central in fostering this new dynamic artistic atmosphere. The most integral among these spaces include the gallery Plan B in Cluj, founded by Adrian Ghenie and Mihai Pop in 2005. Ghenie, along with Victor Man and Ciprian Muresan have been core figures in the gallery's program, and their work has brought important international recognition to Cluj. Signs of this activity taking root are witnessed in the recent forming of La Fabrica de Pensule (the Paintbrush Factory), a converted brush factory that now houses dozens of artist studios, a dance company, galleries, and designers committed to enriching artistic communities locally and beyond.

The art scene in Vietnam used to be chiefly centered in Hanoi, but in recent years it has become increasingly identified with Ho Chi Minh City. This is largely due to the formation of Sàn Art, an independent art space initiated in 2007 by four Vietnamese artists—Tiffany Chung, Dinh Q. Lê, Tuan Andrew Nguyen, and Phunam—all of whom were primarily raised in the United States after their families fled during the war. Having attended art schools in the U.S., they returned to live and work in Ho Chi Minh City over the last two decades. Sàn Art began as a reading room and exhibition space, and has quickly turned into the anchor of artistic and cultural production in the region, providing local artists access to a broad range of art, theory, and literature. Sàn Art has brought many international artists and curators to Ho Chi Minh City for the first time, helping to bridge local Vietnamese communities and the international contemporary art circuit, and regularly presents the work of local Vietnamese artists.

The collective The Propeller Group, comprised of Nguyen, Phunam, and Matt Lucero, also makes Sàn Art their working base. They are tactically working on the interstices of popular culture and the visual arts. By adopting a slick, corporate aesthetic they are able to produce innovative multimedia work while forging new terrain for conceptual art.

In the last decade, San Francisco has seen a rise in new galleries opened by young enterprising individuals who have brought a renewed interest to the city's art scene. Additionally a number of collectives have formed, contributing to these local communities. Chief among them is Futurefarmers, begun by Amy Francheschini in 1995, which has grown over the years to include Dan Allende, Ian Cox, Sascha Merg, Josh On, Stijn Schiffeleers, and Michael Swaine. Together the group forms a dynamic collective of teachers, researchers, designers, gardeners, scientists, engineers, and illustrators, who all work collaboratively on artistic projects that challenge current social, political, and economic systems. Jointly they opened a design studio in San Francisco that seeks to create new forms of sociability, in addition to an artist-in-residency program that has hosted over 19 artists from eight countries since its inception in 1997.

In Tangier, the Cinémathèque de Tanger (CdT), run by the artist Yto Barrada since 2005, has introduced Moroccan film to both local and international artists while also presenting important international films to Moroccans. Institutions such as the Los Angeles County Museum of Art and the Gotesborg Kunstholl have recently invited the CdT to present programs of North African filmmakers. The Cinémathèque has also played a vital part in conserving Moroccan, North African, and Arab film and video in the country and abroad. Themes present in Barrada's own work include issues of migration and interstitiality involved with living in the port city of Tangier and along the Strait of Gibraltar, a major gateway between Africa and Europe. Barrada's work also poetically addresses Morocco's postcolonial relationship to France via her focus on subjects that bear traces of that colonial history.

Six Lines of Flight: Shifting Geographies in Contemporary Art is organized by the San Francisco Museum of Modern Art. Major support is provided by The Andy Warhol Foundation for the Visual Arts, the Creative Work Fund, Pat and Bill Wilson, and SFMOMA's Collectors Forum. Generous support is provided by the Betlach Family Foundation and the Trust for Mutual Understanding.