The third edition, entitled 'The Unknown', features artworks in several locations, such as Zamek Culture Centre, National Museum, Archdiocesan Museum, The Centre of Christian Culture; as well as the public space of Poznan with 150 artists in all programmes and centres. "The unknown exists with the same intensity as the known or everything already comprehended. Perhaps a better way of putting it is: what exists, exists; what does not exist, exists as well" (Tomasz Wendland). 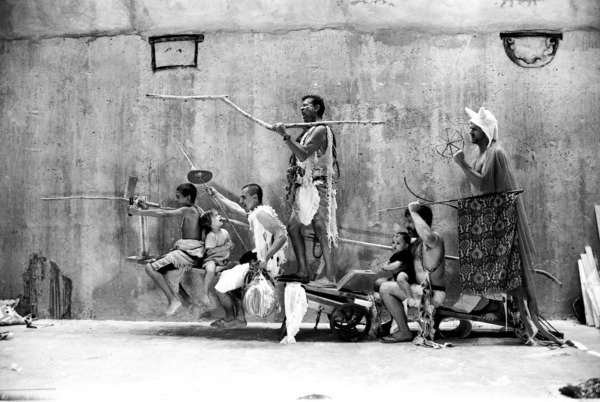 This year, we are happy to announce the fourth edition of mediations and the third edition of the biannual art event entitled MEDIATIONS BIENNALE, which takes place in Poznań. The term Mediation/Mediations was first coined in 1999 as a title for an exhibition organised by Inner Spaces – The Centre for Contemporary Art in Poznań. Mediations Biennale should be perceived as a continuation of the international Inner Spaces Festival initiated in 1993.

MEDIATIONS BIENNALE has been evolving as an art event and organisational enterprise – it has gained a research character whilst abandoning the strictly presentational form. For that reason, there can be discerned two stages:

preparatory stage (preceding the opening of the biennale): during this stage, research is carried out on a chosen topic;

The third edition of MEDIATIONS BIENNALE entitled THE UNKNOWN – NIEPOJMOWALNE will take place in Poznań and it will last from 14 September till 14 October 2012. Four curators will oversee the programme of the event (Denise Carvalho, Friedhelm Mennekes, Fumio Nanjo, Tomasz Wendland). We also welcome two guest curators: Drorit Gur Arie and Rita Varga. Artworks of the biennale will be presented in several locations. To name just a few: Zamek Culture Centre, National Museum, Archdiocesan Museum, The Centre of Christian Culture; as well as the public space of Poznań. It is worth highlighting here that 2012 Mediations Biennale espouses a unique synergic character – except for the main expositions, there will take place a lot of affiliated programmes. What is more, the Poland Biennale Conference will be accompanied by presentations in over 40 galleries located in various places in Poland. The main programme of the biennale will host 80 artists. In total, 150 artists will present their work in all programmes and centres. The efficient development and application of the 2012 Mediations Biennale concept is supervised by the Mediations Biennale Foundation.

MEDIATIONS BIENNALE, being an initiator and partner in many international events in the world (a.o. Belgium, China, Indonesia, Japan, Korea, Germany, Poland, Slovakia, Hungary, Great Britain, Italy, Uruguay and the USA), offers Poznań a unique opportunity and space for dialogue. Alongside the autumn event, there will be organised several exhibitions: the first one will be at Scope art fair in New York in March 2012; in May 2012 at Geopark congress in Shimabara in Japan; and finally in June at Manifesta in Hasselt in Belgium.

The unknown exists with the same intensity as the known or everything already comprehended. Perhaps a better way of putting it is: what exists, exists; what does not exist, exists as well.


Dagmar Reichelt – in Neue Zuricher Zeitung in 2010 – wrote that a creative process is simultaneously a research process which results in a stream of reflection, not only in a verbal form, but most of all in a mental one. Artists seem to be participants in the process of knowledge creation while being also, in a similar way to a viewer, creators of their own interpretation of an image.

If time was conceptualised as a playground, it would be possible to talk about available simultaneity bound only by an ability to comprehend one own's act of participation. Life would lend itself to be seen as a series of limited acts of participation, which outcome would lead us to the natural rejection of some unwanted, faultless possibilities. Awareness suffers from deficiencies and unexpected surpluses which occur as result of the accumulation of experience. On the other hand, the state of unawareness is as equally strong an act of participating as that of awareness.

David Bohm writes that 'The entire world of material things is a fragment of the whole. Everything is connected to everything else, every part of the whole contains the whole.' Reality defined in such a way may remain unknown. A result of it is a participation in the whole. Nothing is complete in itself and it may fulfil itself only through participation. There exists, therefore, a suggestion that values such as life and mind may develop in the whole. We need to become aware of the fact that we are a part of a such reality and 'we do not think about it but we think it'. What is understandable becomes a tool for comprehending everything that remains unknown and vice versa. If I were to teach, then I would certainly teach something I do not know.

In 1954, Joseph Beuys said that a cross and Christ as symbols were exhausted. He further ascertained that speaking about spirituality is more profound without those representations. The new ways of thinking about Spirituality was initiated by Wassily Kandinsky's book entitled Point and Line to Plane – it concerned a search for new iconography of spiritual language in art. I am under the impression that people, since then, have been under some repression. They have been subjected to the control of past symbols, images; later on, objects and gestures, and finally landscape, colour, light and geometrical forms. After Kandinsky and Duchamp, an experience of spirituality in contact with art has taken the form of an individual contact, both in the case of an artist and a viewer. Cultural locality, collective values, systems and religions do not determine the search for one's own pathway. They no longer determine answers to a question about the individual experiencing of spirituality.

The fact that I do not understand something does not bother me. I create my own cloud of unawareness. It becomes nicer and fuller, richer and more versatile. It becomes something I know exists. I become accustomed to what it is like. Being immersed in unawareness, I navigate my way across it while having an ability to tell the difference between it and the state of knowing. Knowledge turns out to be flat and exhaustible. It limits my own thinking about it by appointing ways of thinking and perceiving without a chance to change my stance towards all that surrounds me. Definitions are sharp and equivocal. They subjugate designates to one and only function. To recall John Cage's word, there comes this moment when we become aware that there are no wrong answers, because all of them are correct. We experience the fact that what is significant is hidden behind an artwork's readable surface and it remains inaccessible. This inaccessibility appears to be a new dimension present in reality. Sometimes, we manage to disclose a gap, a rupture in the sphere of belief and consciousness surrounding us, through which we manage to discover a different dimension, new proportions. It does not matter that we do not understand what we see, since it is the context that matters. From Kandinsky's times, new iconography has been being shaped in art spirituality. Spirituality based on individual experiences and emotions. Iconography of the unknown is, among other issues, the topic of the third edition of Mediations Biennale.