Morrison draws on the wealth of found and everyday objects for his complex, highly determined sculptures and drawings. Composite sculptures assembled from mannequin busts, weather balloons, water bottles, shopping carts and bullets are fused into polymorphous forms, which are then cast in bright stainless steel. 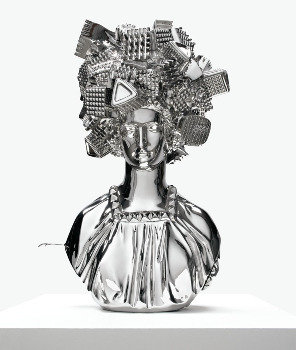 This Greek bust was copied thousands of times and its distant available contemporary offspring ended up on a front lawn next to a gnome, giant fiberglass mushrooms, and a statue of the Virgin of Guadalupe.
Joel Morrison

Gagosian Gallery is pleased to present an exhibition of recent sculptures by Joel Morrison. This is his first solo exhibition in Asia.

Morrison draws on the wealth of found and everyday objects for his complex, highly determined sculptures and drawings. Composite sculptures assembled from mannequin busts, weather balloons, water bottles, shopping carts, and bullets are fused into polymorphous forms, which are then cast in bright stainless steel. The resulting works engage the full history of western sculpture, from classical Greek sculpture to Futurism to the Duchampian readymade. The highly refined stainless steel surfaces attest to the intensive process required to make them, beginning with an arduous casting process followed by intense polishing.

Morrison's oeuvre maintains a dynamic conversation between an idiosyncratic sense of humor and the art-historical canon. The sculptural result of this dialogue is a landscape of unnatural peaks and unidentifiable protrusions that presents fresh, arresting and sometimes outrageous work of arts. Tomb (2012) recalls Frank Stella’s Getty Tomb (1959)—the reflective steel surface resembles a wall hanging covered with a packing blanket, the seams of which mimic the geometric shape of Stella’s famed monolithic work. While Stella’s rejection of the figurative is finite, Morrison’s obscured canvas has limitless possibility. Encased in a skin that abstracts all that it reflects, it envelops the world at large in its ever-changing surface.

Morrison’s drawings offer an equally engaging but entirely different visceral experience. These three-dimensional interpretations of line drawings explore the dynamics between two and three dimensional representation. In Standing Figure with Crowbar, the drawn line is represented by a matte black elongated composition that bows and bends in three dimensions, the crimped, flattened, and fissured ends of which signal the unmistakable tip of a crowbar. The detailed facets of the Basketball Rim Drawing Series reveal the lines of the form on which they are based. The multifaceted nature of Morrison’s sculpture defies easy categorization, operating on a fault line between critical engagement and entertaining aesthetics that is very much in the spirit of our times.

Joel Morrison was born in Seattle in 1976. He received his BA at Central Washington University and an MFA in sculpture at the Claremont Graduate University. His work has been exhibited internationally and is included in numerous public and private collections worldwide. In 2010 his work was the subject of a solo exhibition at the Wexner Center for the Arts. In 2006 he was included in the California Biennial at the Orange County Museum of Art and “Thing,” the Hammer Museum, Los Angeles. Morrison lives and works in Los Angeles.

For further information please contact the gallery at hongkong@gagosian.com or at +852.2151.0555.