A House of Leaves

First Movement. Using as a starting point key pieces from the collection by Louise Bourgeois, Gerhard Richter and Pierre Huyghe, the exhibition is conceived as a symphony and structured in three movements and an epilogue. The First Movement explores hybrid forms, memory and fragmented figures with works by Nina Beier, Louise Bourgeois, Tony Cragg, Enrico David, Man Ray, Lawrence Weiner and many more. 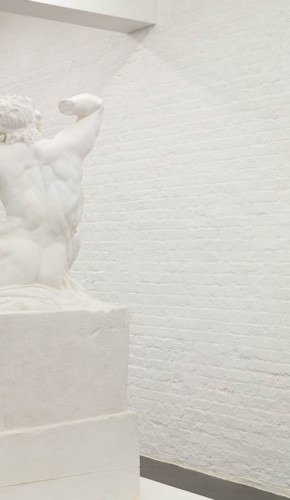 “A work of art encountered as a work of art is an experience, not a statement or an answer to a question. Art is not only about something; it is something. A work of art is a thing in the world, not just a text or commentary on the world... [Artworks] present information and evaluations. But their distinctive feature is that they give rise not to conceptual knowledge [...] but to something like an excitation, a phenomenon of commitment, judgment in a state of thralldom or captivation. Which is to say that the knowledge we gain through art is an experience of the form or style of knowing something, rather than knowledge of something [...] in itself.” Susan Sontag

“The value changes in a room when one picture is moved: it’s like the way a dinner party changes according to the guests” Walter Hopps

“(...) Make a heavy institution levitate, make it dance. (...) We have ideas we need to animate.” Paul Holdengräber

Using as a starting point key pieces from the collection by Louise Bourgeois, Gerhard Richter and Pierre Huyghe, A House of Leaves is conceived as a symphony and structured in three movements and an epilogue. With Louise Bourgeois’s ECHO VIII, 2007, the First Movement will explore hybrid forms, memory and fragmented figures. Inspired by Gerhard Richter’s Fuji, 1996, the Second Movement will enquire abstraction and minimalism. From Pierre Huyghe’s Silent Score, 1997, the Third Movement will explore conceptual art and performance. Lastly, the Epilogue will be a movement towards the void, emptying the exhibition space to explore the architecture and the volume, revealing semi-permanent works and interventions in the building. A House of Leaves is an exhibition imagined as an experience of time: the exhibition will change constantly, the experience will never be the same, with works being replaced by others to gradually alter the general context and naturally evolve from one movement to the next.

A House of Leaves will provide the first opportunity to discover the largest group of works from DRAF’s collection. Adding to this main group of works, artists have been commissioned to create special interventions in the whole building, while curators and researchers have been invited to deliver talks and texts.

The title references US novelist Mark Z. Danielewski’s eponymous novel in which different storylines, told in different styles, intertwine. The story is centred around a house which keeps changing and in which the interior dimensions become larger than its exterior over time. Much like in Danielewski’s novel, A House of Leaves borrows different languages, tells multiple narratives in different ways, and asks its viewer to become co-author in order to present a collective effort to define an art form – in this instance the contemporary art museum, from its collection, displays, special commissions and loans, to its educational and interpretation system. This troubled museum we are creating abandons any authoritarian voice. It reflects a trust and respect for the works the museum is responsible for, to the guests joining the project, and to the visitors engaging with it.

An extensive education programme will accompany the exhibition. The programme will test various modalities of practicing and sharing knowledge collectively, as well as investigating the identity and potential of contemporary art institutions both in London and internationally. Three free courses open to the public will run every other weekend from November 2012 until February 2013. The courses are DRAF Course, Fatos Ustek & Visual Forum, and Form/Content. The details will be announced in September 2012 on our website www.davidrobertsartfoundation.com.

A House of Leaves is curated by Vincent Honoré, Director and Curator, DRAF, and inaugurates the new premises in Mornington Crescent, a 19th century former furniture factory.