The show bring the work of Paris based photographers and filmmakers to London. As part of the season Laurent Delaye Gallery is delighted to present an exhibition of work by Jean-Pierre Khazem, Philippe Durand and Ryuta Amae. 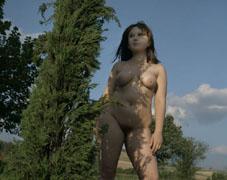 The French Embassy supported by Ville de Paris and AFAA have joined forces with London galleries in a unique collaboration to bring the work of Paris based photographers and filmmakers to London. As part of the season Laurent Delaye Gallery is delighted to present an exhibition of work by Jean-Pierre Khazem, Philippe Durand and Ryuta Amae.

Jean-Pierre Khazem uses photography to examine aspects of reality. Using models of both sexes in a variety of interior and exterior settings Khazem employs masks to obscure the face of his subjects. This subtle intervention gives his sitters a doll like appearance, reducing them to a semi-generic state. For Made in Paris Laurent Delaye will be showing works from Khazem's recent series Volume II, a suite of female nudes shot in leafy forest glades. Suggesting a pastoral return to nature the images centre on a naked woman wandering through lush vegetation. The images are highly evocative of renaissance paintings where the body is often integrated into the landscape both thematically and compositionally. Despite the natural setting, Khazem's photographs all highlight a dialogue between the body and a more commercial environment. Khazem operates as both an artist and advertising photographer with work produced for Diesel, Eurostar, and Heineken amongst others. By fusing references from fashion, product and cosmetic advertising, the artist raises questions about the relationships that exist between the subjective and objective world in terms of its depiction of the real.

Ryuta Amae produces large photo derived prints of architecture and landscape environments and Laurent Delaye will be exhibiting Hypnotic, a print from 2001. Like most of Amae's works his images are made using a PC modelling package which are output using a photographic print process. Re-creating various scenes ranging from civic housing estates to commercial skyscraper construction and gardens Amae's work is a meditation on the affects that digital technology has on image making, taking concerns about the photographic image and its Â¼truth' to a new level. Hypnotic is a complex and hyper real image of a garden water feature, complete with a mini waterfall, rockery, and pool. By using a computer to generate his works, organic surfaces such as rock, and water, have an unsettling appearance. Reporting on nature at an exaggerated rate they convey a convincing sense of reality that is slowly yet subtly undermined by its plastic synthesis. Amae's work plays with our sense of reality, offering up new possibilities in image making informed by radical digital technologies.

Sources (1999 Â­ 2000) consist of eleven different photographs of springs in the French Alps, produced by photographer and filmmaker Philippe Durand. Viewed from above, Durand has concentrated in particular on the vegetative and mineral life, present in the scenes. The sunlight dancing on the water, the pebbles shimmering like gemstones and the plants caressed by the flow of the water evoke a meditative feeling of strolling along the riverbank. In order to catch the transparency of the water and the sparkling of the light, Durand employed the technique of 3D-imaging (printed on lenticular paper) which allows the material qualities of the water to become almost tactile. The artist regards nature as a place of the organic, one that wildly organises itself, not only in nature, but also in the urban landscape. In cities like Odessa, Brussels, and Paris he previously photographed flyers, posters, graffiti and small signs in shop-windows. In these seemingly insignificant, small but individual marks, he discovers neglected signs and traces, within which lay buried the beauty of the transitory and the irrational-poetic value of the "Ã‰criture trouvÃ©e" (Found Writing). With discrete charm Philippe Durand draws our attention to how organic life here and there reclaims the temporarily "tamed" urban space.