In the show "Lo Bueno y Lo Malo", are presented works by two collectives and 12 artists of different nationalities. Using several media and languages, all of the pieces reflect on the 'sensitive actions' performed in the context of the political and economic hegemonies of globalization. In "Materiais de Construcao" Lucia Koch presents works which reintroduce the materials she has used in her interventions in the last ten years. 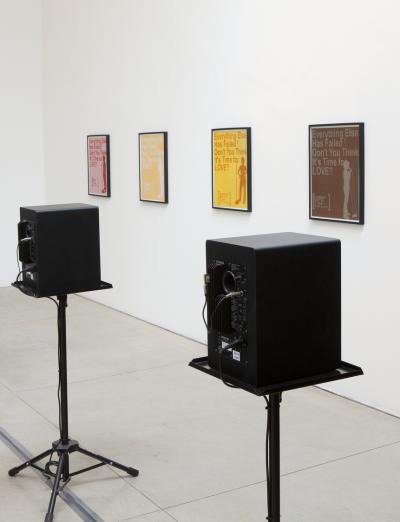 Mexican curator Patrick Charpenel was selected to reopen Roesler Hotel's international partnership program in what will be his first work in Brazil. An art collector and historian, a philosopher known for probing into the paradoxes and ambiguities of contemporary culture, Charpenel is a force to be reckoned with when it comes to independent curating in Latin America. Charpenel directs the prestigious Colección/Fundación Jumex, in Mexico City, one of the private collections which best represent local and global contemporary art.

In the collective show Lo Bueno y Lo Malo, the guest curator will present works by two collectives and 12 artists of different nationalities. Using different media and languages, all of the pieces reflect on the 'sensitive actions' performed in the context of the political and economic hegemonies of globalization.

The show will feature installations, videos, photographs, performance, 16 mm film, and sculptures produced around the world between 1990 and 2011. Through this set of works, Charpenel discusses the cultural, financial, and political practices of neoliberalism. The show also hints at the need to overcome the old dogmas of the production-consumption system so as to reach a new sense of moral commitment. "In this age of technology and constant movement, there is a pressing need for ethical living; men of the new millennium are eager to strengthen moral values as well as to improve the quality of communication," says the curator.

To curate the show, Patrick Charpenel took his inspiration from the work of Cuban-American Félix González Torres (1957-1996) and his positions. The curator emphasizes human empathy and complicity, and makes a reference to the installation Portrait of Ross, presented by González Torres in 1991, when his partner died from HIV virus infection. The interactive piece consisted of a pile of candy placed at a corner of the exhibition venue, weighing exactly the same as the artist's partner. The audience was invited to take the candy and eat it. By consuming small fragments of the work, visitors would share an act of communion of physical and spiritual loss. Similarly, according to the curator, each of the works by the 15 artists in the Roesler Hotel show "touches the spiritual fibers of human nature, prompting a direct connection between beings which relate and communicate with one another."

The curator
Born in the city of Guadalajara in 1967, Patrick Charpenel has curated a host of important shows at galleries and institutional venues in Mexico and other countries. His main shows include Acné, at the Museum of Modern Art (Mexico City, 1995), Inter.play, at the Moore Space (Miami, 2003), Edén, with the Colección/Fundación Jumex (2003), Sólo los Personajes Cambian, at the Museum of Contemporary Art in Monterrey (Mexico, 2004) and Franz West, at the Museu Tamayo (Mexico City, 2006). Charpenel is also a writer and an author of critical essays for journals and catalogues.

The artists
Most of the artists in Lo Bueno y Lo Malo play a relevant role in contemporary art scene, many internationally renowned and award recipients. Several have featured in shows in Brazil. They represent different generations, but are mostly in the 37-to-51 age bracket. Four were born in the 1960's (Pawel Althamer/Poland; Ana Torfs/Belgium; Roman Ondák/Slovakia; and Cao Guimarães/Brazil). Seven others were born in the 1970's (Fernando Ortega/Mexico; Sharon Hayes/USA; Danh Vo/Vietnam; Alejandro Cesarco/Uruguay; Minerva Cuevas/Mexico; Tim Lee/South Korea; and Kerry Tribe/USA). The only exception is Moyra Davey, born in Toronto, Canada, in 1958. Two art collectives will also participate: the highly active Danish group Superflex, created in 1993, and the Paris-based Claire Fontaine, founded in 2004.

Since early 1990's, the work by Rio Grande do Sul-born, São Paulo-based Lucia Koch has interacted with architecture as she modifies ambient lighting to cause noticeable changes in spatial perception. This, however, is not an intervention project. At Galeria Nara Roesler's conventional address in São Paulo, the artist Lucia Koch will present previously unseen works which reintroduce the materials she has used in her interventions in the last ten years, arranged on industrialized stands and "catalogued" by pattern and type of material. Each set/portfolio is a self-contained piece with many possible configurations, which viewers can rearrange by moving the panels around. Materiais de Construção (Construction materials) show begins at the gallery window and ends in the exhibition room.

On the gallery window, the audience will see Entulho [2012], a gridded box containing the accumulation of leftover cuts from sheets of different materials used by the artist over the course of ten years. The cut-out patterns in acrylic and MDF boards were drawn based on observation of recognizable architectural elements, and the materials were used at interventions at museums, galleries, and household environments. In this piece, the scrap cuts, formerly classified by type, shape and material, are irreversibly mixed together.

In order to host Materiais de Construção, the gallery will be converted into a showroom occupied by metal displays with sliding panels like those found at stores showcasing ceramic tiles, veneers, doors etc. The displays hold different building materials which the artist designed for specific architectural purposes over the years: laser-cut acrylic or wood sheets; see-through canvases with gradient-color prints; photographs of fictitious walls made from images of tiles collected through constant observation of façades in the cities she travels to.

"In Materiais de Construção, the pieces are not set into the architecture; rather, the place is suppressed," the artist explains. Each display contains a set of possibilities, either fulfilled or not, for the use of those materials - the collection is shown to the viewers, who can experience diversity saturation as well as the superimposition of moving pieces.

Lucia Koch was born in Porto Alegre in 1966. In the 1990's, she began making a series of interventions in household spaces, a practice she would later extend to institutions, with projects designed specifically for the places and situations she encountered. She has featured in international collective shows in Brazil and abroad, including A terrible Beauty is born (Lyon Biennial, 2011), How to Live Together (São Paulo Biennial, 2006), More than this! (Göteborg Biennial, 2005), and Poetic Justice (Istanbul Biennial, 2003).
Recent shows include Seco, Sujo e Pesado, an intervention at Galeria Nara Roesler (São Paulo, 2011); Casa de Espelhos - Conjunto Nacional (Galeria Caixa Cultural, SP, 2009); Casa Acesa (La Casa Encendida, Madrid, 2008); and Correções de Luz (Centro Universitário Mariantonia, SP, 2007) and Two Todays (Starkwhite Gallery, Auckland - New Zealand, 2007). The works of Lucia Koch are included in major collections in Brazil and other countries.