The group exhibition engages in a dialogue with a provocative claim made by Slovenian sociologist, literary theorist, translator, and political activist Rastko Mocnik in his collection of texts titled How Much Fascism? (1995). Following the exhibition opening, Part Two of the 3rd Former West Research Congress: Beyond What Was Contemporary Art takes place on 29 September 2012. 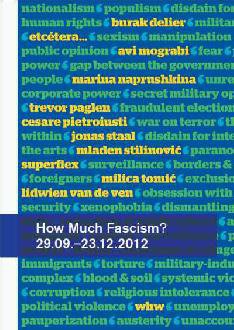 The exhibition engages in a dialogue with a provocative claim made by Slovenian sociologist, literary theorist, translator, and political activist Rastko Močnik in his collection of texts titled How Much Fascism? (1995). Močnik suggests that we no longer need to ask ourselves whether “new local populism, new ‘fascism,’ [and] new right-wing extremism” drive the contemporary condition, but rather, how much they drive that condition. We must attend not only to the open manifestations of fascism, though we witness more and more of such instances and one needs to ponder how societies that permit and tolerate such phenomena still “qualify” as democracies. More importantly, WHW suggest, “we need to turn our attention to the silent fascism that is becoming normalized through the systematic violence seeping into the laws and everyday administration practices of the nation-state, and to assess the mechanisms of oppression and the various symptoms of contemporary fascism that are being presented as unavoidable, pragmatic necessities.” In sync with these thoughts, the artists in the exhibition inquire about the possibility of art vis-a-vis such circumstances and invest in the cognitive power of art and the potential within the aesthetic experience of questioning reality.

Following the exhibition opening, Part Two of the 3rd FORMER WEST Research Congress: Beyond What Was Contemporary Art takes place on 29 September 2012 at Utrecht School of the Arts, Mariaplaats 28, Utrecht.

Following the deliberations during Part One titled Beyond What Was Contemporary Art (19–20 April 2012, Vienna), Part Two of the 3rd FORMER WEST Research Congress bases its discussions on a question ushered in—somewhat unexpectedly—by theorist and curator Irit Rogoff in her closing keynote address for Part One: “What on earth do they mean when they say art?” Admittedly a question that is as difficult as it is intriguing, it seems to be a critical one to pose and also to begin to answer as the hegemonic formations that held the imagination of the future hostage for the last 20-odd years are being dismantled. The chasm opening up before us is yet to be filled through a negotiation of meanings and (im)possibilities. At stake is the redefinition of the space of art beyond what we came to know as both product of—and propaganda for—neoliberal capitalism.

The exhibition How Much Fascism? is curated by What, How & for Whom/WHW. It is a continuation of the exhibition Details at Bergen Kunsthall, Bergen which has been the starting point of ongoing research that will continue with an exhibition at Extra City Kunsthal, Antwerp co-curated with Mihnea Mircan and a series of events within the project Beginning As Well As We Can (How Do We Talk About Fascism?) at Gallery Nova, Zagreb, Grazer Kunstverein, Graz, and Tensta Konsthall, Stockholm.

How Much Fascism? at BAK is a research exhibition within the framework of BAK’s long-term project FORMER WEST which is generously supported by the Mondriaan Fund, Amsterdam and the EU Culture Programme, Brussels.