4 exhibitions on artistic responsibility. The series engage unsettled histories and unresolved questions, lending themselves uneasily to scrutiny. In the first show, "Anarchism Without Adjectives", the New York artist Christopher D'Arcangelo (1955-1979) will be the centre of attention. Opening Symposium during a weekend. 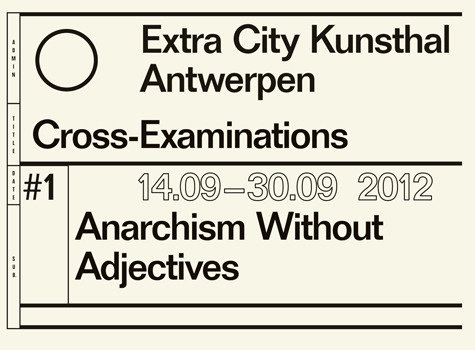 This fall, Extra City Kunsthal presents Cross-examinations, a series of four exhibitions, engaging questions of artistic responsibility and agency from various perspectives. It is a progressive accumulation of evidence and divergent truths, an inquiry into artistic modes of verification and into art’s capacity to diagnose a historical condition.

Cross-examinations
The series borrows its title from a judicial procedure that aims to ascertain truth by subjecting a witness – his or her credibility – to questions formulated by defence and prosecution, therefore to recompose truth from distinct vantage points and in relation to opposed sets of criteria. Truth ‘holds’ if it can be crossed-out, broken into half and seamlessly reconstructed. This dubitative method is applied in our program to four critical case studies, aiming for a composite look at the strategies via which contemporary art can apprehend art-historical, economic or political reality.

Four exhibitions
All four exhibitions engage unsettled histories and unresolved questions, lending themselves uneasily to scrutiny. In the first cross-examination, the New York artist Christopher D’Arcangelo (1955-1979) will be the centre of attention. His radical artistic practice was concerned with the question of autonomy in the arts and conveys a critical reading of the role of the artist and the institutionalisation of art. In a hybrid between an exhibition and a symposium, his legacy will be answered and debated by contemporary artists and critics. The second cross-examination, How Much Fascism?, will be led by What, How and For Whom (WHW), a Zagreb-based curatorial collective, in collaboration with Mihnea Mircan. The exhibition, co-produced with BAK Utrecht, investigates the symptoms of fascism that have today seeped beyond (populist) politics, into other areas of public discourse, posing therefore a proportionally more difficult problem to artistic critique. Cross-examination #3 focuses on 20th and 21st century Belgian art, aiming to map exemplary positions preoccupied with the social and political relevance of art. The last episode in the series is Ultimate Substance, a film by Anja Kirschner and David Panos, co-produced by ECK, Liverpool Biennial, Secession Vienna and NBK Berlin, dealing with the economic - and symbolic - crisis which troubles Greece and the European Union – its quasi-mythological foundations and financial prospects.

Formulation and Re-Formulation
The series will be accompanied by a script, written by Vincent W.J. van Gerven Oei and designed by Remco van Bladel, where an initial ‘master text’ will undergo three subsequent moments of revision, erasure, self-contradiction and re-formulation. The text places itself under examination, disputes its premises and provisional conclusions, shaping and contorting itself in response to the progress of the series.

Inspired by his contact with artists such as Daniel Buren, Ian Wilson and Lawrence Weiner, whom he met as an assistant at the John Weber Gallery in the early to mid-1970s, D’Arcangelo enlisted Conceptual Art’s language-based production and dematerialization in order to further its institutional critique and egalitarian promise.

The present iteration is curated by Dean Inkster and Sébastien Pluot, in collaboration with Mihnea Mircan, and will consist of a a series of discussions on the artistic and theoretical ramifications of D’Arcangelo’s work and practice, an exhibition of existing and commisioned works by artists invited to respond to issues raised in D’Arangelo’s work, as well as a series of video interviews with people who either knew and worked with D’Arcangelo or who have been instrumental in maintaining his legacy.

Anarchism Without Adjectives
From 1975 to 1979, D’Arcangelo developed an artistic practice notable for its radicality and critical import concerning the role of the artist, the status of the art object and the institutionalization of art. A desire for a radical democratization of the production and reception of art, motivated his practice. His position as an artist was voiced in a statement on anarchism that accompanied, in various stenciled and typewritten forms, the majority of his actions and interventions: “WHEN I STATE THAT I AM AN ANARCHIST I MUST ALSO STATE THAT I AM NOT AN ANARCHIST IN ORDER TO BE IN KEEPING WITH THE [….] IDEA OF ANARCHISM. LONG LIVE ANARCHISM.” The statement, with its ellipsis in the place of an adjectival definition of anarchism, recalls the historical expression, coined in Spain at the height of the international anarchist movement in the late-nineteenth century, anarquismo sin adjetivos (anarchism without adjectives).

An Oral History
Although interest in D’Arcangelo has not been entirely absent over the last thirty years, to date no posthumous exhibition or critical evaluation of his work has been undertaken. The written and visual documents which D’Arcangelo compiled over a five year period in order to chronicle his practice have only recently been made available in 2009 at the Fales Library & Special Collections, New York University. Given the paucity of existing commentary on D’Arcangelo’s work, and the lapse of time since it was produced, the exhibition expands on a series of ongoing video interviews that are intented to form an oral history of the artist’s work and practice. Interviewees include: artists Stephen Antonakos, Daniel Buren, Ben Kinmont, Peter Nadin, and Lawrence Weiner, historian Benjamin H. D. Buchloh and critic Naomi Spector.

Participating Artists and Critics
The exhibition and symposium will converge during a weekend in which artists, critics, and the exhibition’s curators will be present to share their thoughts and discuss what has until recently been a little-known, but influential moment in the history of recent art – on that has existed almost entirely by word of mouth.