Journeying through four centuries and some fifteen themes, Bohemias sheds light on a phenomenon which traverses the history of art and society from Leonardo da Vinci to Picasso and still resonates in our contemporary world. Like Puccini's opera, this exhibition aims to mix fantasy and gravity, show and melancholy, misery and glory. 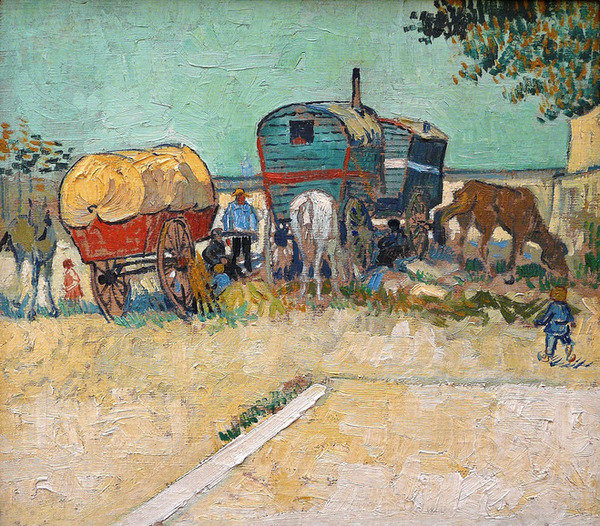 Bohemia is a diehard modern myth, thriving in songs, films and poems, proclaimed dead a hundred times and forever rising from its ashes.

The figure of the Bohemian first appeared in the mid-19th century, between Romanticism and Realism, at a time when the artist’s status was undergoing a profound transformation. A talented young artist no longer sought the protection of some prince or other; he was a solitary genius, impoverished and misunderstood, who anticipated social upheavals. Many of the great heralds of modernity, poets (Baudelaire, Rimbaud, Verlaine), painters and musicians (Courbet, Van Gogh, Satie, Picasso), put a face on this phenomenon. For generations of budding artists, these rebellious unconventional figures, idle womanisers and drunkards scraping a meagre living, sparked the dream of redeeming glory at the risk of oblivion and death. Relayed by literature and the press, theatre and opera, their Bohemian lifestyle rapidly became immensely popular, running like wildfire through the collective imagination and linking Paris indissolubly with the Latin Quarter and Montmartre.

Over the last twenty years, research in exogenous fields such as the history of marginal groups, migrations and nomads has reactivated analysis of this phenomenon. The myth of Bohemia is now part of the infinitely richer and more complex history of the relationship between European peoples and the Romani people. Taken for an Egyptian in the Classical period, and then diversely called a gypsy, manush, gitan, cagot…, soon after gypsies first appeared in the West in the 15th century, the figure of the Bohemian became a hero for novelists (starting with Cervantès) and a favourite subject for artists (Callot, Vouet, Georges de la Tour). The gypsies’ mysterious origins, long incomprehensible language, close links with nature, and fortune-telling skills made them legendary characters. Their sudden appearances and disappearances nourished the fantasy of an intense, sensual life, with no ties or rules. A fascinating figure for artists for whom the Bohemian was the ultimate in freedom. From then on, gypsies and “bohemian” artists had much in common. They were free spirits and wanderers, social outcasts and indigent. Elusive and shrewd, party to inaccessible secrets, definitively misfits, they disturbed, provoked and enchanted our sedentary society. The term Bohemian was applied both to the gypsies and to the artists’ Bohèmes marginal lifestyle. It was emblematic of the irrepressible freedom that the Nazi regime tried to stamp out when it targeted both gypsies and modern artists.

Designed by Robert Carsen — who is back at the Grand Palais again after his successful Marie Antoinette exhibition here — Bohemias is an exhibition to be experienced. Visitors tread a long road through the centuries and encounter the most picturesque representations of the travellers. Then they step into the artist’s world, his garret, studio and hideouts, and end up in Montmartre cafés. Stepping out of the cabaret to go on their way, they are suddenly sobered by the sight of the Zigeuner room in the Degenerate Art exhibition in Munich in 1937.

Journeying through four centuries and some fifteen themes, Bohemias sheds light on a phenomenon which traverses the history of art and society from Leonardo da Vinci to Picasso and still resonates in our contemporary world. Like Puccini’s opera, this exhibition aims to be a popular event, mixing fantasy and gravity, show and melancholy, misery and glory.