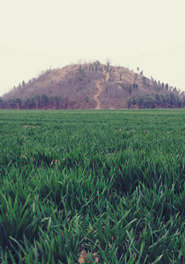 The exhibition is at once a meditation on China's imperial past and a broad survey of its present, in the form of 173 stop-action videos, each of which unfolds before one of China's known extant imperial tombs. The largest and most significant project by leading female artist Kan Xuan (b. 1972) to date, "Millet Mounds" is the result of over 100 days and 28,000 kilometers of continuous, on-the-road research and shooting with a crew of four in early 2012. Kan Xuan's lens claims, catalogues, and personalizes a centuries-long lineage of history and power. Through the process of searching out and recording these ancient sites, some of which are major tourist sites while others linger in disrepair, Kan Xuan engages with contemporary rural China in all its twenty-first century complexity, as a persistent past incorporates itself into the quotidian realities of the present. The exhibition takes its title from the name used by villagers in Northern China to refer to tomb mounds that resemble piles of their staple crop at harvest time. Opening on September 15, with a press conference at 17.