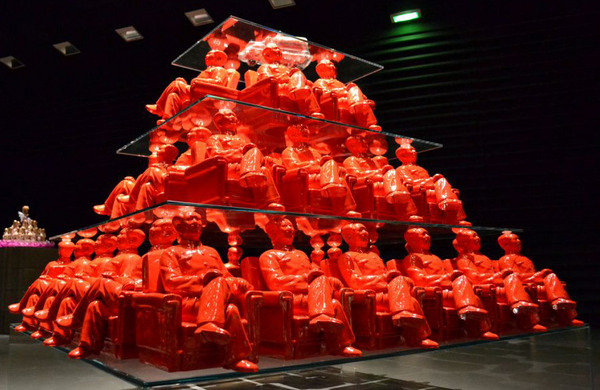 « Contemporary art explained to children» presents works created by Italian artist Gianni Colosimo, and curated by Patrick Amine. Through their unique perspective, these works reveal their possibility of immediate transposition into the world of children. They recount stories. The artist brings these to life or modernises some of them, by exploring their multiple facets. An original perception, bursting with humour An exhibition in motion – Introduction to never before seen works Exhibited at the Centre Pompidou Metz in 2011, this exhibition is designed and established as a genuine work in progress.

The curator explains: « At the beginning of this project, which only included around ten or so works, I felt and understood that in this aesthetic and didactic perspective there was, to a certain extent, a possibility of revisiting a period in the history of modern and contemporary art, by looking into the spirit and materiality of works. These emblematic works gave fuelled our imagination and own visual pleasure of art in general. Colosimo has thrust himself into the skin of a child by seeking to understand historical references whilst injecting his own fun, imagination and a certain degree of « post-post-modernist » humour into the process »! Seen from this perspective, the proposition was a world premiere! And so, I encouraged him to produce these new creations. » The artist is continuing in his exploration, with this second edition, in his own style, of the scopes of history of art, by taking for his own and reinterpreting the emblematic works of the 20th and 21st Centuries, such as those of Duchamp, Baselitz, Gino De Dominicis, Marcel Broodthaers, Daniel Buren, Piero Manzoni, Jannis Kounellis, Joseph Beuys, Maurizio Cattelan, Jeff Koons, Damien Hirst, Jan Fabre, Giulio Paolini, Yves Klein, Arman, Sol LeWitt, etc. Five new works appear at La Sucrière in homage to Luciano Fabro, Dinos & Jack Chapman, Richard Serra, Francesco Clemente, Jean-Michel Basquiat, Julian Schnabel...

Mediation for all members of the public

This exhibition invites the public, both young and the not so young, to take over the revisited works and notably those in reference to Sol LeWitt, Felix Gonzalez Torres or Tino Sehgal... Images, sculptures and extremely fun installations will showcase their entirely new and offbeat character. Recontextualisation of these works and artists leads visitors to an initiation into recent history of art (1950-2012) as well as a genuine stimulation of their own imagination. Gianni Colosimo explains: « In practice, my artistic intervention consists in giving a new vision of the work of art in which children can find fun and be involved, by interpreting the work according to one’s own reasoning. The original reference works are triggers. Some of these were designed by masters in contemporary art. This exhibition is intended for all members of the public, and allows people to enter into the marvellous and often somewhat « obscure » universe of contemporary art ». The exhibition « Contemporary art explained to children » is similar to a « tale», or a « fable », where the onlooker can come in with the enchanted perspective of a child, whilst discovering the major themes of contemporary artists. They reinterpret these themes into various episodes, and visitors are thrust into an artistic soap opera; which rings out like the words of Gino De Domicis: «It’s the public that is exhibited to art, and not the other way around.»
Patrick Amine, curator