The political situation in Caniaris' home country, Greece, and his experiences in Berlin (1973-1975) heightened his interest in formal questions and contributed to the growing socio-political dimension of his work. 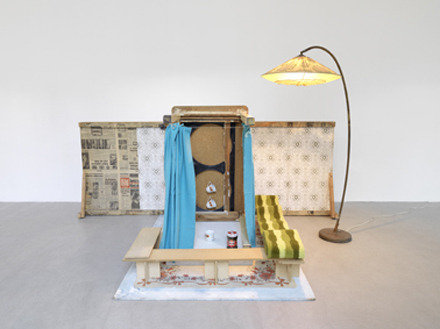 In his Greek homeland, Vlassis Caniaris (1928-2011) ranks among the most widely known artists of his generation. In 1958, he presented the first exhibition of abstract paintings to be held there, and adopted a critical position on political and social issues in his work throughout the country’s military dictatorship. Beyond the borders of his home country, Caniaris is frequently viewed as an “artist’s artist”: while his work is known among and appraised among international artists, he has been almost forgotten by the wider art world after his major international exhibitions between the 1960s and 1990s. Following his death in 2011, the GAK Gesellschaft für Aktuelle Kunst is to stage the first solo exhibition by Caniaris outside Greece since 1992, initiating a long overdue process of rediscovery.

Caniaris’ work reveals a tremendous artistic development both in terms of its formal aspects and thematic diversity. Striking out on his own from the 1950s onward, Caniaris explored the aesthetic concerns of the art of his time from an independent perspective, achieving very different results to his contemporaries (such as Robert Rauschenberg, Jasper Johns, or Cy Twombly). While living in Rome (1956-1960), he yet focussed his practice on two-dimensional images, drawing inspiration from the works of Giorgio de Chirico and symbolic realism. His turn towards the abstract dates to his time in Paris (1960-1967 and 1969-1973) at the latest, where he sought to dissolve the surface of his works and opened his practice to three-dimensionality, assemblage and objet trouvé. The political situation in Caniaris’ home country (to which he returned in 1967 to participate in the resistance movement against the Greek military junta until he was forced to leave again in 1969) and his experiences in Berlin (1973-1975) heightened his interest in formal questions and contributed to the growing socio-political dimension of his work.

Caniaris’ visual language is distinctive and surprising for its period, leading to invitations to show his work at the Venice Biennale (1964 and 1988) and Documenta 6 (1977), along with numerous solo exhibitions (incl. shows at the Musée d’Art Moderne de la Ville de Paris (1970), Moderna Museet, Stockholm (1972) and the ICA Institute of Contemporary Arts, London (1976)). His unique idiom of forms and materials, developed in the 1960s and 1970s, has influenced artists up to the present day. Caniaris’ objects and installations demonstrate a treatment of material that has become established practice in contemporary works by artists such as Isa Genzken, Cathy Wilkes, or Kai Althoff (among others).

Underscoring his role as a source of inspiration for a younger generation of cultural producers, his exhibition at the GAK Gesellschaft für Aktuelle Kunst will trace the development of Caniaris’ oeuvre across his career. An extensive side programme will accompany the exhibition, providing opportunities to explore his work and its relevance to the production of contemporary art from a range of perspectives