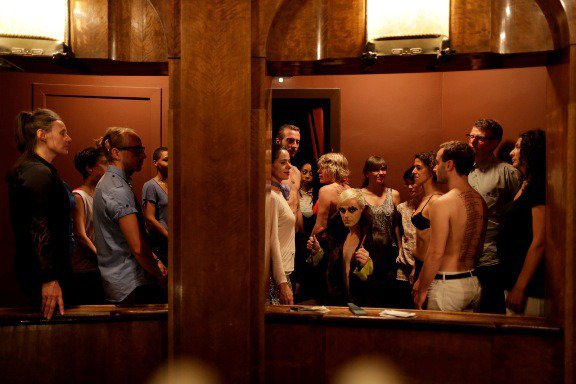 Art Is Concrete.
And So Is Truth?
Co-produced by steirischer herbst

Under the leitmotif “Truth Is Concrete”, the steirische herbst festival 2012 pursues the potentiality of concrete truth as a working hypothesis and seeks direct action, concrete transition, and knowledge. “An art that not only presents and documents but that engages in specific political and social situations—and an activism that not only acts for the sake of acting but searches for intelligent, creative means of self-empowerment.” The exhibition project by Camera Austria with the modified title “ART Is Concrete” has been cooperatively developed together with the festival, in reaction to this leitmotif and the implications presented by its content, especially when it comes to the issue of (re)presentation/documentation. The contradiction of “real politics”, the “real” world, and (re)presentation is challenged by us here, very much as per Jean-Luc Godard, who in 1967 asserted: “Art is not a reflection of reality. It’s the reality of this reflection.” And, as such, art is a political intervention, which Godard likewise demonstrated. The gesture of the reality of art itself is therefore set against the assumption that art remains immersed within a symbolic politics of representation. Assuming that the world is far from being a transparent entity recognisable without intellectual effort, as Stuart Hall writes, both politics and art emerge as different regimes of interpretation and change, yet with the one that is weighted as “truth” or “reality” also being the consequence of an exercise of specific power. So, in which reproduction of power have we always been enmeshed, making us prone to reclaim that something like truth intrinsically resides within either art or politics?

In seven consecutive individual presentations, for which the artists conceived new works, Camera Austria is enmeshing, based on these discursive points of origin, photographic images in various artistic fields of agency that simultaneously transgress and constitute the image: memories, acts of staging, histories, research, ­archives, appropriations, and montages. Engendered here is a shifting space of artistic presence and reification that undertakes various interventions into the regimes of meaning ascription amidst art, politics, and everyday life. In the process, art becomes political by defining its interventions as a space of common affairs, where forms of art cannot be differentiated from common experience and are thus readable as part of “reality” and also of “politics”—as a space in which the discrepancy between what we see and what we say comes to light, between what we do and what we really could be doing.

The more clearly we delimit ourselves from the consensus of a liberal democratic society, as delivered to us by the media, the stronger seems to be the need for construction of a reality that follows its own conventions and rules. Realness Respect shows current performative drafts that react to the tangible difference between reality as it is subjectively perceived and common reality as conveyed by the media. But when political art examines the relationship of aesthetics and reality, the question soon arises as to the autonomy and status of the art work, based on which artists achieve concrete, critical work on social issues. Even without any clear-cut answers, art creates its own concrete truths here.

The title Realness Respect already suggests that the view of reality is manifold, ultimately everyone will follow his or her own version, however, despite all antagonisms and medial communication, we assume one common reality, which per se implicates no outside beyond. This view on a common reality is characterized by an increasing uncertainty due to altered geopolitical structures and the financial- and credit market disruptions. In Central Europe, this destabilization is ultimately also driven by the concerns whether the accustomed experience of a stable monetary growth and the thereon based relative social peace that lasted for decades can be upheld in the long run.

Acting and realizing happen always in the one, assumed and communicated reality. Beyond the discourse which triggers this reality, it is impossible to claim an autonomous standpoint. After Jean-François Lyotard, this reality is subject to the economical system of capital which is characterized by the absorption of time: the upcoming is calculated and evaluated beforehand in order to make a profit thereof in the presence, or to profitably integrate the actions into the system. The discourse in art and also in philosophy, however, has possibilities on hand: It must continuously advance the speaking of the unspeakable and the presenting of the unpresentable. In the realm of arts, the method of the unstoppable experiment is crucial: in this way, actions are generated which refer to the differences in the hegemonic discourse of capital. Equal to a dense net of power relations connecting organizations and institutions (which amongst others create the discourse and the associated reality), after Michel Foucault, realms of resistance can spread, without being determined by organizations, institutions or other individuals. If the strategic encoding of power leads to an accumulation of power – equally – the strategic encoding of revolutionary elements can lead to a revolution. The artists can thus try to handle the medially transported reality – in relation to the action – and in doing so not only question its basis but also become aware of their own symbolic position.

From 1963 to 1969, Franz Erhard Walther created 1. Werksatz (First Work Set), which comprises fifty-eight mostly tailored and sewed fabric elements. These objects are activated by the visitors, thus unfolding their meaning by utilization; the work process is completed by the interaction with the users. Walther provided “instruments”, explaining their working. A series of drawings titled Werkzeichnungen which Walther produced in line with 1. Werksatz (First Work Set), elucidate such genesis of the works, pointing at possible utilizations of the objects and experiences of the audience. Script and sculptural studies are linked to space, terminology and action.
With his artistic and terminological approach, Walther ultimately intended to detach the definition of art from a traditional orientation towards the object and its reception: the art-work understood as action piece. The presentation of a selection of Walther’s drawings Werkzeichnungen in the exhibition refers to an anti-essentialist and relational concept or a model of symbolic participation of the audience, which can, according to the particular situation be activated, experienced and reviewed.

In her performance and installation Again Audience, Carola Dertnig explores the potential of actions and therein follows Walther’s anti-essential approach to some extent. Dertnig goes back to A. M. Rodchenko’s study of a Workers’ Tribune from the 1920s which was conceived as part of an unrealized Worker’s Club in the USSR. Rodchenko pursued the creation of a space for education and participation around artistic, social and political ideas. Dertnig redesigns Rodchenko’s tribune as a freestanding and mobile speaker’s stage, which can be folded up. The extendible size of the scissor fence determines the spatial presence of the performance. In the frame of a live performance on the nearby public place “Hier ist Platz” (Here is space), the artist enters the stage and speaks from there. After this she carries the stage together with the audience into the exhibition space where it is collectively reinstalled. The way of the stage’s utilization implicates a transition of performative and political practices to daily routine. This piece is supplemented with six photographs of a person namely of the artist, which document the use of the stage. In addition, the video Some exercise in complex seeing is needed is presented. The artist’s voice therein accompanies the monotone movements of a person swimming against the tide.

In the video work Situations by the artist group Claire Fontaine, a powerful activism is performed in front of the audience, leaving behind the manifestations of political resistance and the fragments of authorship. Claire Fontaine shows that mere art production cannot oppose or subvert late capitalism, since we are inevitably within this economic system. In Situations, Claire Fontaine translate the effects and forces of the current political and monetary crises to a subjective emancipation of the individual. The forceful demonstration of lessons in close combat techniques and self-defense confront the audience with a depicted and a possible own radicalism.

Respect Realness finally shows a performance by Santiago Sierra, who instructs the monumental building of the letter “P” in order to have it subsequently destroyed. In a series of performances at locations around the world, where respectively one letter was smashed, “P” is the penultimate iconic monument to be destroyed. Sierra sets an example of our times in order to wreck it in the next moment and presents us thus his ideas of our reality. Also in this sense “Respect Realness”.

Opening of the exhibition: Saturday, September 29, 2012, 12 noon
Opening speech by Gerald Raunig
On this day, the exhibition will be open non-stop until 6 pm.

Dialogic tours through the exhibition for school classes and other groups by prior appointment:
rotor@mur.at, 0316/ 688306

The idea of an absolute democracy entails a thorough rethinking of the linear, fixed and orthodox production of historical knowledge and narratives. It is an idea that suggests the need for the redistribution of wealth and power and the need for new systems of rule. Additionally, it denounces the effects of capitalism and in that way challenges normative understandings of class, race, gender and sexuality. The notion of an 'absolute democracy' was initially used by philosopher Baruch Spinoza and was reactivated by Antonio Negri and Michael Hardt, in an attempt to envision "a republic based on the broadest possible cooperation between citizens, and on the development of common goods. These are the terms in which we can really talk about freedom for all."1

The exhibition Absolute Democracy presents the work by artists who critically investigate or problematize "democracy," as a concept whose social, political and economic implications play an important role in the formation of individual and collective subjectivity. Some of the artists in the exhibition propose alternative readings of repressed histories while others denounce traditional structures of discrimination based on gender, ethnicity, political orientation, etc. Some of the works in the exhibition could be thoughts of as activist, while others use artistic language in order to reflect on these issues.
1 Antonio Negri & Michael Hardt, Social Struggles in Italy, 2002

Right-wing and populist politics are gaining ground, and with them new forms of intolerance. The growing recognition of these tendencies as a natural drift within the political spectrum as well as the concomitant stigmatisation of all that is culturally marked as alien can be designated as a social process of normalisation. Formerly tabooed positions are becoming socially acceptable, whereas the entry of right-wing parties into the European parliaments figures only as the most visible aspect of this political symptomatology, a call for traditional values and ideas of social order that aim for exclusion on the basis of a politics of identity. The exhibition ‘Intolerance / Normality’ questions the tacit normalisation of these political phantasms of cultural purity and answers with a celebration of hybridity, monstrosity and non-identity.