Places, Strange and Quiet. Travelling through Eastern Germany, Australia, Armenia and Japan, Wenders' fascinated gaze enables him to draw out the essence of any moment, place or space. The exhibition brings together a selection of works from the past forty years. 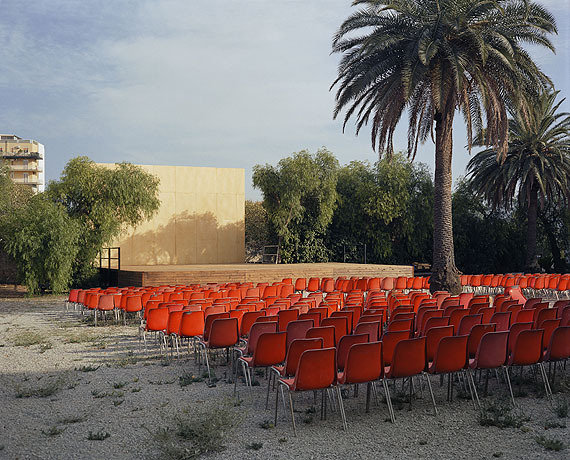 OstLicht Gallery is pleased to announce the exhibition ‘Places, Strange and Quiet’ by the internationally renowned director and photographer Wim Wenders. The selection will be displayed in Austria for the first time, with over forty large-format photographs on display. This exhibition brings together a selection of works from the past forty years. Travelling through Eastern Germany, Australia, Armenia and Japan, Wenders’ fascinated gaze enables him to draw out the essence of any moment, place or space.

Wim Wenders’ photographs could be described as a survey of the inconspicuous. They mostly capture places void of people: abandoned, forgotten or unknown landscapes. They exude a subtle melancholy, exemplify a poetry of the forgotten and present things on the verge of disappearance. In his photographs, Wenders does not capture conventional or everyday recognisable spaces; instead, he is interested in the “invisible” and hence looks for the unknown or the seemingly marginal.

On his journeys he discovers unmarked areas on the map, and through their visual depiction he then challenges the presumptions or expectations that an observer might have about these areas. His intention with the photo- graphs is to capture places and landscapes and to distil the memory of these.

Wim Wenders’ photographs are almost always deserted, whether depicting a rusty ferris wheel on an empty lawn in Armenia, an abandoned open air cinema in Palermo or a house in ruins in the former Jewish quarter of Berlin. Regarding Ferris Wheel, Armenia, Wenders’ states: “When I saw that Ferris Wheel, I couldn’t help thinking of all the people who have taken a ride on it, the couples smooching, the kids shouting, all the singing, all the laughing, all the vodka being drunk. That place can tell us so much about its history, as long as there is no person in the shot. As soon as there is a single human being in it, all the attention will go to that person, and away from the place. Landscapes and places are so talkative! As long as you leave them alone, and are willing to listen ... There used to be a Sowjet settlement here, including this amusement park for the occupying forces. When Armenia reached its independence, almost all Russians moved away.”

‘Places, Strange and Quiet’ at OstLicht Gallery presents an impression of Wim Wenders’ forays into the world - exploring it as a photographer.

“When you travel a lot, and when you love to just wander around and get lost, you can end up in the most unusual spots ... I don’t know, it must be some sort of built-in radar that often directs me to places that are strangely quiet, or quietly strange.”, Wenders explains.

Photography has been an essential practice in Wenders’ oeuvre for over thirty years, since he drove through Western America in the early 1980s taking photographs while location scouting for his film ‘Paris Texas’.

In contrast to his work as a director he uses “quite old-fashioned”, as he describes it, analogue technology in his photography: “In the analogue process, we’re equal partners, my relation to the place continues until weeks later, when I finally see a result. ... Digital photographers today are working in an altogether different profession. They are ‘image producers’ and conduct some new sort of painting, that leaves photography way behind, in my book. Myself (together with others) I’m happy I can still practice it. Not out of nostalgia, but for the pure pleasure in reality. It’s a constant work against its ongoing disappearance.” says Wenders.

Wim Wenders was born in 1945 in Düsseldorf and raised in Düsseldorf, Koblenz and the Ruhr, where he attended a humanistic secondary school in Oberhausen. After two years of studying medicine and philosophy and a year abroad as a painter in Paris, he attended the Hochschule für Film und Fernsehen in Munich from 1967 to 1970. In 1971 he was a founding member of the Filmverlag der Autoren, the driving force behind the “New German Cinema”. In 1975 he founded his own production company, “Road Movies”, in Berlin. As one of the most influential representatives of the “New German Cinema” during the 1970s his movies received many prestigious awards and much international critical acclaim.

In 1984 he became a member of the Akademie der Künste in Berlin. He received honorary doctorates of the Sorbonne in Paris (1989), the theological faculty of the University of Fribourg (1995), the Louvain University (2005) and the faculty of architecture of the University of Catania (2010). Wim Wenders is a founding member and, since 1996, the residing president of the European Film Academy. Since 2005 he has been a member of the order Pour le Mérite. Currently he is holding a professorship at the Hochschule für Bildende Künste in Hamburg. Wim Wenders has published numerous books with essays and photographs. Together with his wife, photographer Donata Wenders, he currently lives in Berlin.