Vacant Lots. While Hamilton and Gremzde reference the tradition of figurative landscapes and portraits, the psychological charge and setting of their work is a phenomenon of the contemporary world. 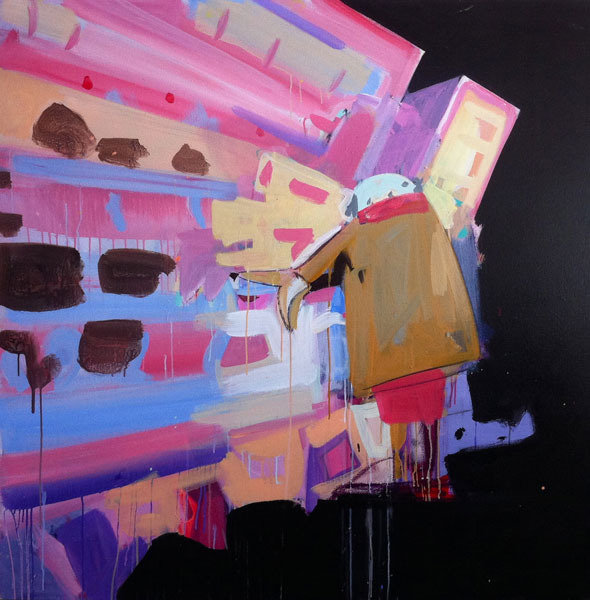 ‘Wipe your hand across your mouth, and laugh; The worlds revolve like ancient women Gathering fuel in vacant lots.’
Preludes, T S Eliot

The WW Gallery is pleased to present Vacant Lots, an exhibition of paintings by Susie Hamilton and Inguna Gremzde. While Hamilton and Gremzde reference the tradition of figurative landscapes and portraits, the psychological charge and setting of their work is a phenomenon of the contemporary world. The vacant lots of their paintings are the metropolitan deserts of Asda, Iceland, Lidl and Tesco, the modern supermarket.

Like the extension of blank concrete airport runways or the multiplication of identikit skyscrapers, office blocks and housing developments, the continual expansion of supermarkets leads to a paradoxical paralysis of choice. Hamilton and Gremzde reflect upon the soulless non-places and waste lands of our consumer super-cities, presenting a bleak vision charged with melancholy.

Susie Hamilton’s Women Shoppers shuffle through the freezer aisles: solitary, obese and elderly. Inguna Gremzde’s paintings on plastic lids are both intimate miniatures and mass-produced portraits of a single figure moving through the non-narrative of a shopping trip. The subjects of both Hamilton and Gremzde become anonymous consumers in a tribe of vacant shoppers as they are processed by supermarkets through a wilderness of discounts, reductions and special offers.

This exploration of supermarket psychology is fuelled by a social paranoia which stretches beyond the depressing monotony of the weekly shop. The chaos and anarchy which is caused by the order of J G Ballard’s forty-storey High Rise packed with a ‘glut of conveniences’, seems to lurk behind the sterile aisles. Barry Schwartz describes this ‘paradox of choice’: "There is vastly too much choice in the modern world and we are paying an enormous price for it. It makes us feel helpless, mentally paralysed and profoundly dissatisfied.”(1)

At odds with the insistent visceral assault of supermarket crowds, bright colours, stark strip-lighting, the relentless pop drone and piped smells, the works in Vacant Lots carry a sense of the dystopia masked by this artificial superstore environment.

Opening during Frieze Week Vacant Lots will offer a counterpoint to the art fair. With its temporary white walls and neatly divided cubicles Frieze offers another type of consumerist waste-land, an art superstore for convenience purchases.

(1) The Paradox of Choice, Barry Schwartz