With exhibitors from 35 countries, the 10th edition include galleries from territories including Argentina, China, Columbia, Hungary, India, Korea and South Africa. This edition features a new section - Focus, open to galleries established after 2001, showing up to three artists - with the usual Frieze Projects, Frieze Film and Frieze Talks. For the Sculpture Park, Clare Lilley features work by Hans Josephsohn, Yayoi Kusama, Anri Sala and many more. This year, coinciding with Frieze London, Frieze also introduces Frieze Masters, a new fair with a contemporary perspective on historical art. 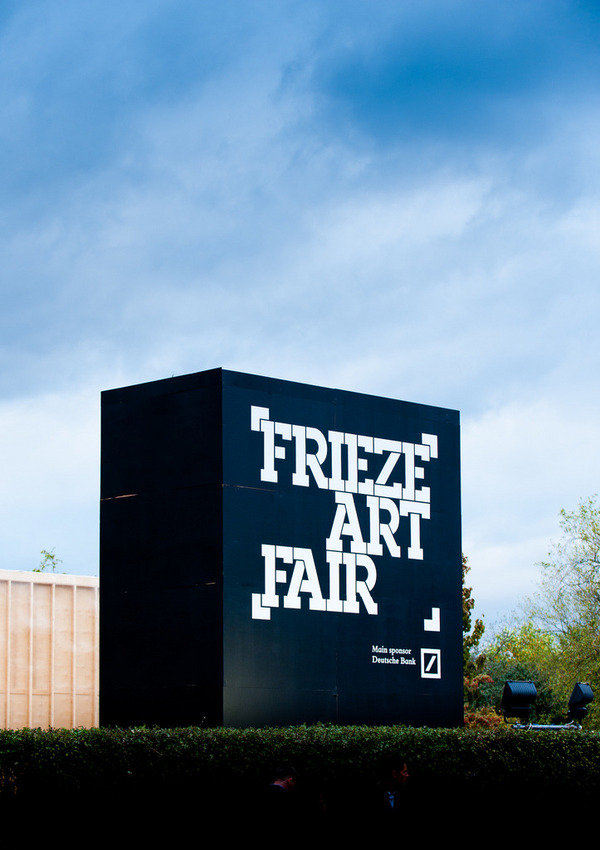 With exhibitors from 35 countries the tenth edition of Frieze London is the most international event organised by Frieze; confirming the fair’s position as one of the world’s leading contemporary art events. Participants this year include galleries from territories including Argentina, China, Columbia, Hungary, India, Korea and South Africa.

Frieze London is a carefully selected presentation of 175 of the most forward- thinking contemporary galleries and will present new work by over 1,000 of the world’s most innovative artists. This year the fair is once again housed in a bespoke temporary structure designed by architects Carmody Groarke.

The tenth edition features a new section: Focus, open to galleries established after 2001, showing up to three artists. Focus was first introduced at Frieze New York, which took place 4–7 May 2012 in Randall’s Island Park, Manhattan. The Frame section of the fair is dedicated to galleries under six-years old, showing solo artist presentations. The selection of the 25 Frame galleries was advised by curators Rodrigo Moura and Tim Saltarelli. Frame is supported by COS.
This year, coinciding with Frieze London, Frieze also introduces Frieze Masters, a new fair with a contemporary perspective on historical art. Together the crossover between the two fairs will make London the focus for a broad international art audience.

Frieze Projects is a unique programme of artists’ commissions realised annually at Frieze Art Fair. Frieze Projects is curated by Sarah McCrory and supported by the Emdash Foundation with additional support from Maharam.

The artists commissioned to create five site-specific works for Frieze London are: Thomas Bayrle, Aslı Çavuşoğlu, DIS magazine, Grizedale Arts / Yangjiang Group and Joanna Rajkowska. The Projects programme includes an examination of the use-value of art by Grizedale Arts and Yangjiang Group in the form of a structure that will act as a forum for a number of artists who produce food, chaotic dining events, performances, and talks. In contrast, Joanna Rajkowska’s work will invite contemplation and reflection by transforming an area of Regent’s Park into a field of smoking incense. Aslı Çavuşoğlu’s recreation of a crime drama scene will find unlikely parallels between the production of murder mysteries and decisions made whilst making art. DIS magazine’s unique approach to the production of imagery will be a response to the fair, and a design by Thomas Bayrle will be dramatically woven into the fabric of the fair.

The winner of the Emdash Award 2012 is the Belgian/American artist Cécile B. Evans, who is based in Berlin. Evans’ winning proposal takes the form of an audio guide to Frieze London accompanied by a holographic ‘host’. The audio guide will feature a panel of notable non-art experts.

This year’s commissioned artists deal with ideas including those of history and memory, be it personal or collective. The way narrative is conveyed and constructed around individuals, buildings or objects and place is a theme that runs through the programme via imagined journeys, fictitious events and romantic relationships.

Frieze Talks is a daily programme of keynote lectures, panel debates and discussions that take place in the auditorium at Frieze London. It is presented by Frieze Foundation and programmed by the editors of frieze magazine: Dan Fox, Jörg Heiser and Jennifer Higgie.

The Family Space at Frieze London 2012 will take inspiration from the Frieze Projects programme. Workshops and a range of other educational activities will be presented in partnership with Nintendo and ReachOutRCA. The Family Space will allow families and guests the chance to try New Art Academy game on Nintendo 3DS XL.

We are pleased to announce that for the fourth year Champagne Pommery will generously sponsor the Stand Prize. The prize of £10,000 will be awarded to the most innovative gallery stand at the fair. The following international curators and critics will select the winning stand; Alex Farquharson, Director, Nottingham Contemporary, Nottingham, November Paynter, Associate Director of Research and Programs, SALT, Istanbul, and Doryun Chong, Associate Curator, Department of Painting and Sculpture, MoMA, NY. The prize will be awarded at 4pm at the fair on Wednesday 10 October.

This is the tenth year of the unique partnership between Outset, Frieze and Tate. Based on the generosity of Outset, a charitable foundation focused
on supporting new art, the fund enables Tate to buy important works at the fair for the national collection. With a fund that has totalled over £1million over the duration of the partnership, 86 works by 57 significant international artists have been collected since 2003.

The Fund is organized and financed by Outset Contemporary Art Fund and supported by Le Méridien Hotels & Resorts. The donors to Outset have a particular interest in enabling Tate’s acquisition of emerging and international art. The 2012 Tate acquisitions will be listed on the Frieze website on Thursday 11 October.

Allied Editions is a collaboration between: Camden Arts Centre, Chisenhale Gallery, Institute of Contemporary Arts (ICA), Serpentine Gallery, Studio Voltaire, and the Whitechapel Gallery. At a booth in Frieze London each gallery will feature a portfolio of limited-edition artworks, by artists including Cory Arcangel, Jeremy Deller, Thomas Schütte, Wolfgang Tillmans, Pablo Bronstein, Gillian Wearing and John Baldessari. These artist editions have been specially made and donated by the artists in support of each gallery’s exhibition and education programmes.

Frieze London will host a number of eating and drinking options: Hix Restaurant and Champagne Bar will once again offer a selection of signature dishes as the main restaurant at the fair.

Frieze London is one of the world’s leading art fairs, Frieze London takes place from 11–14 October 2012 in Regent’s Park, London and features 175 of the most forward-thinking contemporary galleries from Los Angeles to Berlin, London to Beijing. Frieze London was founded in 2003 by Matthew Slotover and Amanda Sharp.

Frieze Masters is a carefully selected presentation of over 90 of the world’s leading galleries. The fair will give a unique contemporary perspective
on art of all ages. Coinciding with, and within walking distance of Frieze London, Frieze Masters will take place 11–14 October 2012, Gloucester Green, Regent’s Park, London, and is sponsored by Deutsche Bank.

Carmody Groarke are the London-based architectural studio that has been the Frieze London architects in 2011 and 2012. Carmody Groarke were recipients of the Building Design UK Young Architect of the Year (YAYA)
in 2007, the practise won two RIBA awards in 2010 and were last year named as winners of the International Emerging Architecture Award by The Architectural Review.

Rodrigo Moura is a curator, editor and art writer. He has worked as a curator at Inhotim (Minas Gerais, Brazil) since 2004 and previously he was a curator at Museu de Arte da Pampulha. Moura has written extensively on arts and culture for Brazilian newspapers and international art press.

Tim Saltarelli is a New York-based curator and writer who has organised exhibitions in the United States, Canada and Europe. Until the end of 2010, he was Director at Elizabeth Dee Gallery. He is presently a Helena Rubinstein Curatorial Fellow at The Whitney Museum of American Art Independent Study Program, New York.

Sarah McCrory has been the curator for Frieze Foundation since late 2009 and has been responsible for the Projects and Film at Frieze London for the past three years. In 2009 McCrory, with Curator Daniel Baumann was a Frame advisor and has previously worked in not-for-profit and commercial galleries. McCrory is known for her support and work with emerging, young and underrepresented artists.

VIP preview for the fair is on October 10