The exhibition aims to synthesize the experience of high modernism, which strove for pure, autonomous forms, and of post-Conceptual art and its determination by specific experiences of time and space. 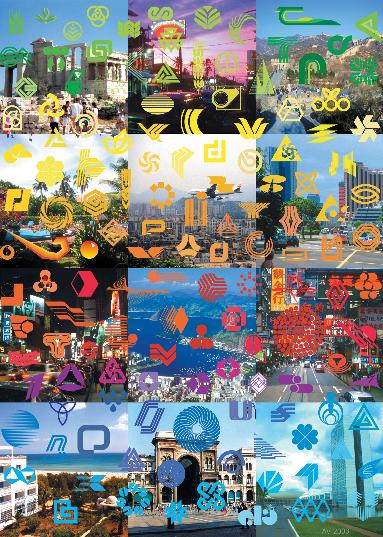 The exhibition Form-Specific aims to synthesize the experience of high modernism, which strove for pure, autonomous forms, and of post-Conceptual art and its determination by specific experiences of time and space.

At a time when we are becoming increasingly aware of how quickly the world can be homogenized, and the fear of a possible disappearance of the specific differences of its various spaces is beginning to rear its head, we must learn to recognize form as a tool and as a weapon of communication. The more canonized the graphic signs, forms, and colors, the more general the consensus behind them, and the more significant the relations of power discernible from the extent and the ways of using form.

No matter how universal a given form may appear, we must now point out its specific aspects, at least in terms of its use, perception or interpretation. To present this fact, the exhibition Form-Specific wishes to use the example of some of historical works from both Western and various marginal contexts. Naturally, also this retrospect view is taken from the present-day standpoint of thinking about form and its temporal and spatial determination. Even though this exhibition does not wish to put forward form as an abstract or autonomous entity, it may well repeat the experience of modernist (Minimalist) art to a great extent. Yet, rather than speaking of what is visible (what you see is what you see), present-day works, at times reminiscent of Minimalist works shorn of particular thoughts and personal emotions, address that which is not visible. With their apparently pure forms, current works do not speak of universal laws; instead, they refer to some sort of immaculate laboratories in which science descends from the pedestal of pure thought and becomes involved in the production of substance, both for the improvement and for the destruction of the world.

Whereas modernist works strove to attain the utmost in purity and autonomy of form, form-specific works underscore the fact that various forms may be viewed from the point of their usefulness, their social life as it were, which is very important in the increasingly codified world of global communications. While site-specific works were based on their interaction with the viewer and the space, form-specific works focus on a relatively free use of existing forms in terms of their repetition within a different spatial and time frame. Although a given form is repeated because of its particularity, the universality of its understanding is at risk every time it is repeated. Every use of a given form potentially jeopardizes the system within which it has originated, as there is no guarantee it will be universally understood in the sense presupposed by the system. Its repetition in the context of a work of art can thus be an articulation of new spaces of freedom, of a free manipulation with the existing signs of an increasingly formalized world.
Zdenka Badovinac

The exhibition, which is conceived and organised by Moderna galerija, will be placed at its new premises, an as yet not renowated building in the complex of the former Yugoslav Army barracks, where, in 2000, the first display of the collection Arteast 2000+ was staged. The first display of the new collection of Moderna galerija Arteast 2000+ emphasized a dialog between East and West Europe and offered the most comprehensive overview so far of East European art based on the experience of Conceptualism from the 1960s to the present. Among other things, the exhibition Form â€“ Specific will also provide an opportunity to consider the possible directions for the future development of the Arteast 2000+ collection.