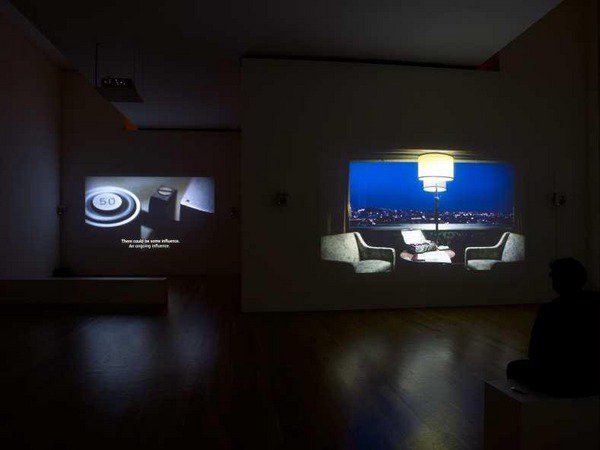 All too often, the artwork is expected to be carrier of its own, fully autonomous meaning; it is expect to act, and to act upon us, from within its discrete borders, be they spatial, conceptual, temporal .... As a result and frequently, little attention is paid to the “back stories” that animate the artist’s thinking about the object— whether a film, performance, sculpture, installation, or photography. The narratives, histories, clues, or, even, lies that precede and sometimes even exceed the artwork get ignored or are considered secondary, at best. How, then, to classify artworks that evoke more than they assert, haunt more than they decree, unsettle more than they reassure, and that do all this from places both within and without the neat contours of the artwork itself?

This 14th edition of the exhibition for the Prix Fondation d’entreprise Ricard, according to its mandate, brings together artists on the basis of pre-established criteria, such as: “French-born or living and working in France,” “under forty years old,” “emerging,” etcetera so as to bestow recognition on a chosen few, and a prize, on the lucky winner. It is easy to explain why some artists are excluded—criteria and guidelines being what they are—but it is rare that one can adequately explain why those that are in actually made the cut. Criteria have a way of making the selection process seem objective, but the whole point of exhibition-making, or artistic endeavors in general, is at once to accept and subvert any governing criteria, to reach, and reveal or subvert, its organizing logic. Évocateur proposes a gathering of young artists who fulfill the given criteria for the exhibition, but also fulfill another, more nebulous one: each of the artists have shown that they can enrapture us with a tangible result, “the artwork”; where this result comes from, however, is just as pertinent to their artistic language: the research, as elaborate as it is eccentric and idiosyncratic, the thought process, and the ricocheting of ideas that is part of their way of getting to the construction of the artwork are, in each case, as pregnant as the artwork itself. These are artists for whom the latent, just as much as if not more than the concrete, and the back story, just as much as the visible and tangible, are the undertows that pull their work.

From the elaborate archival research and enquiries into modernity’s colonial rhetoric that shape many of Mathieu Kleyebe Abonnenc’s projects to the sometimes long-term observation and construction of human relationships that form the basis of Bertille Bak’s filmic narratives, from the allusive material and spatial interactions that are the basis of Katinka Bock’s objects to the seemingly endless and divergent pop cultural reference points that underpin David Douard’s pluriform installations, and from the quasi-archeological research and peculiar stories that are the very foundations of Louise Hervé & Chloé Maillet’s films, performances, and objects to the – usually fictional – characters or rituals that haunt Emilie Pitoiset’s objects and performances, each creates artworks that exceed their visible, tangible, and ultimate forms. However different the practices of the artists in the exhibition and however far away each of them might be from each other in terms of subject matter, chosen medium, or formal concerns, they are gathered here as an experiment about what it could mean for an exhibition to have as one of its defining characteristics the attempt to avoid having what is on view as the whole or end of the exhibition itself.

Elena Filipovic
Elena Filipovic is a writer, art historian, and curator at WIELS Contemporary Art Centre, Brussels. She co-curated the 5th Berlin Biennial (2008) with Adam Szymczyk, and co-edited The Biennial Reader: Anthology on Large-Scale Perennial Exhibitions of Contemporary Art (2010) with Marieke van Hal and Solveig Øvstebø. She has curated or co-curated a number of historic retrospectives, including Marcel Duchamp: A Work that is not a Work of “Art” (2008-2009), Felix Gonzalez- Torres. Specific Objects without Specific Form (2010-2011) and Alina Szapocznikow: Sculpture Undone, 1955-1972, co-curated with Joanna Mytkowska (2011-2012), in addition to organizing solo exhibitions with artists such as Klara Lidén, Lorna Macintyre, Melvin Moti, Tomo Savic-Gecan, and Tris Vonna-Michell, and group shows including The Other Tradition (2010), Anachronism (2007), and Let Everything Be Temporary (2007). She was guest curator of the Satellite Program for emerging artists at the Jeu de Paume, Paris (2010) and has, since 2007, been tutor of theory/exhibition history at De Appel postgraduate curatorial training program and advisor at the Rijksakademie in Amsterdam. Her writings have appeared in numerous artists’ catalogues as well as Afterall, frieze, Kaleidoscope, and Mousse.

Fondation d'Entreprise Ricard
12 rue Boissy d'Anglas - Paris
From Tuesday to Saturday from 11 am to 7 pm
Free admission
Guided tours on Wednesdays at 12:30pm and Saturdays at 12:30 pm and 4:00 pm. Free admission