What is it to be Chinese?

Kyungwoo Chun, FX Harsono, Truong Ngu, Tintin Wulia, David Zink Yi. Five artists of mixed Chinese origins address in their work what they associate to their Chinese roots. However, these artists were not raised up in China nor speak Chinese language. 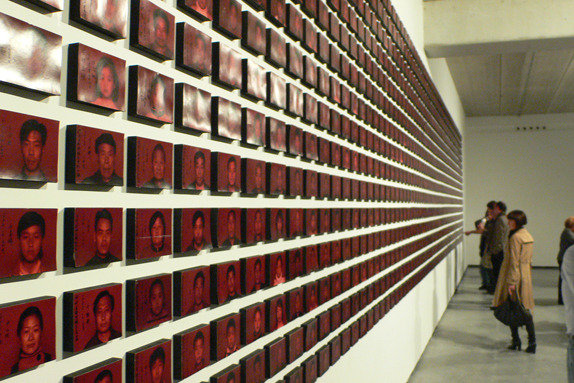 The exhibition What is it to be Chinese? sets up a framework to start thinking about Chinese belonging, but also to reflect about global migration movements and contemporary Chinese culture. In fact, Chinese migration movements have been happening during a fairly long time and all around the globe. Chinese diaspora has enriched countries with new cultural backgrounds, but also resulted in discrimination and marginalisation. In general, migration reflects a global turn mediated by economical, cultural or religious motifs, in search for new opportunities other than the one offered in the place of origin.

Five artists of mixed Chinese origins address in their work what they associate to their Chinese roots. However, these artists were not raised up in China nor speak Chinese language. Nevertheless, they consider themselves to belong to a Chinese cultural backgound that is present in some of their works.

Chinese people came to Indonesia in the late 15th and early 16th centuries. During the Dutch colonisation (1603-1949), Chinese were prioritised by the Dutch for trading purposes. Since then, a long history of discrimination started and still continues. For a period of time, Chinese in Indonesia were not allowed to perform their traditions, nor use their language or even give Chinese names to their children. In conflict situations, they were targets of a series of riots and massacres. Yet some positive turns have happened after the fall of Suharto in 1998, such as the possibility to learn Chinese language in schools, to be able to perform Chinese traditions and even to celebrate Chinese New Year. However, there is still a lot of work to do about this topic, not only regarding Chinese-Indonesian, but also concerning other Indonesian ethnicities and religious beliefs.
One of the artists that has been researching about this subject matter throughout his artistic career is FX Harsono. The artist takes as an example his personal and family history to reflect about some dire episodes in Indonesian history. He documents through installations, paintings, videos, performances, photographs and testimonials what Chinese-Indonesians have been suffering during the last decades. His latest body of work is about learning to write his Chinese name, exemplified in the installation Writing in the Rain (2011). The piece refers to the ethnic law applied only to Chinese-Indonesians (Presidential Decree no. 127/U/Kep/12/1966), a law that constrained them to change their Chinese names to Indonesian sounding names. In fact, the artist did not learn to write his Chinese name until a few years ago.

Tintin Wulia reflects on ancestry through the topic of migration, mobility and stories that she heard from family members or relatives. Her work encourages the audience to be part of it, such as immersing them in family documents in the form of kites as a metaphor for travelling and flying. She might also teach a language course or tell an uncanny story about the origin of the Kaki fruit. Regardless the material used, the artist is capable of integrating in her work human emotions in a quotidian context. In Study for Wanton (2008), Tintin thinks about the different dimensions of Indonesians mixed identity and her own Chinese-Indonesian background, using elements such as national anthems of the nations that occupied Indonesia - such as The Netherlands and Japan - , karaoke and Chinese cookies, but also showing what it is to be a wanton, that stands for a metaphor of a cross-border term, travelling without any limitations of nationalities or border laws.

Although the majority of the Chinese population in Korea came mainly from Shandong, there are individual stories of Chinese who came already in the early 13th century to the Korean peninsula. Tracing Chinese-Korean history is part of the work of Korean artist Kyungwoo Chun, who explores his Chinese origin through his family name. The artist travelled to the village of Zhengzhou in China in search for people with the family name Chun. Since 2006, the artist has done 1000 portraits of people with the family name Chun (Chun means in Chinese thousand). The installation Thousands (2006-2008) is a living archive of photographs that includes the name, birthplace and date of birth of the people portrayed. It also recalls the history of his family name through the Chinese military general Chun, who was sent to Korea in 1592.

Another point of view on Chinese belonging is the one given by Peruvian-German-Chinese artist David Zink Yi, born in Peru to German-Chinese parents. In the video installation El Festejo (2001), the artist plays with the hibridity of his own cultural background and reflects on the cultural environment of Peruvian post colonial society. In Peru, African people were brought to Peru as slaves during the 16th century settling down in the coastal areas to work in the plantations. Similarly to it, Chinese came to Peru as semi-slaves in the late 19th century replacing the African slaves that were working in the manors or haciendas. The video installation recreates the story of a Chinese-African-Peruvian woman, connecting her mixed cultural background with the rhythm of African-Peruvian music and the Chinese decoration of her family house. It is a story of two migration groups that mingled together, depicting a long history of mestizo (mixblood) heritage in Peruvian culture.

Chinese and Vietnamese relations have a long history of tensions between borders, occupations and exchanges. For instance, in the seventies, when Vietnam became the Socialist Republic of Vietnam after the Vietnam war, Chinese-Vietnamese were victims of social discrimination. Many Chinese of Vietnamese origin fled by sea and asked for political asylum, such as the case of the so-called 'boat people'. An example of this is present in the work of Truong Ngu, born in Hanoi to Chinese-Vietnamese parents. Being a minority in Vietnam, part of his family left the country as boat people and established in former West Germany, where the artist grew up since he was eight years old. In his performance Glücklicher Stern (Lucky Star) (2010), he narrates the migration moves of his family playing a game similar to Monopoly, for which the numbers of the dice will influence his family destiny.
What is it to be Chinese? is about Chinese diaspora, but also about how people address their belonging to a place in which they have barely lived nor know the language. It is more about what might be called 'Chinese'. The way these artists address Chinese belonging could give us a clue on how much we do share and incorporate various cultural backgrounds in our lives.

about the curator:
Katerina Valdivia Bruch is a Berlin-based independent curator. She has curated exhibitions for a number of institutions, including ZKM - Center for Art and Media Karlsruhe (Germany), CCCB (Barcelona, Spain), Instituto Cervantes (Berlin and Munich), Instituto Cultural de Leon (Mexico), Para/Site Art Space (Hong Kong), and the Institute of Contemporary Arts Singapore, LASALLE College of the Arts. In 2008, she was co-curator of the Prague Triennale at the National Gallery in Prague. Besides her work as a curator, she contributes with essays and articles for art publications and magazines. Her focus as a curator is on international emerging artists and artists' collectives. More information: www.artatak.net