The video Evian Disease is the 2nd work by Helen Marten that exploits the medium of digital animation. Neil Beloufa has transformed a section of the Galerie Basse into three film sets. With The Kingdom of Glottis Damir Ocko invites us to explore the twists and turns of language. Apres l'histoire is an opportunity to discover the visual collection of Alexandre Kojeve. Markus Schinwald has developed a fantastical universe made up of tightrope-talking animals and metaphysical. 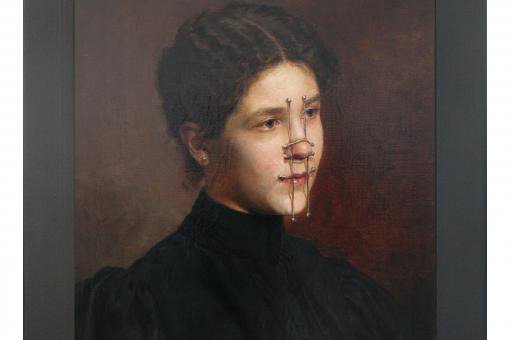 As a foretaste of the infernal mechanical theater Markus Schinwald is designing for the nave of the CAPC museum of contemporary art in Bordeaux for the summer of 2013, the Palais de Tokyo has invited the Austrian artist and Alexis Vaillant, the head of programming at the CAPC and the curator of the exhibition, to present the lodestone of that automation adventure in Paris, an adventure that will be the high point of the 40th-anniversary program of the CAPC in Bordeaux museum.

Over a period of about ten years Markus Schinwald has developed a fantastical universe made up of tightrope-walking animals, metaphysical prostheses, skittish marionettes, old pieces of furniture “SM-ized”, Biedermeier-era paintings with wicked retouches, spaces modified to the point of physically constricting visitors, a universe that questions both our screen-world and its contemporary phantoms.

The video Evian Disease, newly developed for Palais de Tokyo, is the second work by the artist that exploits the medium of digital animation. Formulated as a dialogue between six characters, the video is a speculative composition, a wild chase in search of the place and speed of the contemporary individual. In forcing language to misbehave – to deaden or to excite – the domestic and universal are packaged into the same plane, with casual nature and transformative cultural chaos stylized as friction-activating themes. Behind the sanitized, yet ultimately seductive formal vocabulary of digital animation and the relentless omnipresence of the spoken word, a plot – whose ends only momentarily meet – begins to unfold.

Making assiduous use of the collision of surfaces, the meeting of symbols and the superimposition of materials, Helen Marten delights in the deliberateness of error. The artist ties signs together and unties them, leafing between and contaminating subjects that force public life into categories: projection, status, environment, consumption, sexiness. There is a patchwork (and seams), but the whole process is one of progressive layering, of artificial knots, foils and surface diversions. In this complex network of borrowing there lies an inclination towards the comedic and the communicational, the domestically motivational and the wonderful obscenity of today.

At the center of the Galerie Basse, in a totally open space, composite assemblages appear like islands. The constituent elements of these installations are originally visible in three videos. For his first solo exhibition in a French institution, Neïl Beloufa has transformed a section of the Galerie Basse—before its official opening to the public—into three film sets. In the course of a staged demolition scene, the sets are recycled into art and become the backdrop to the three videos that portray a world in which there is no hierarchy between different kinds of information and where special effects tend to replace reality.

Neïl Beloufa (b. 1985, lives and works in Paris) offers a fragmented experience of sight, memory and the stereotypes that surround and shape us. His exhibitions often take the form of modular environments where the viewer is called on to watch one or more videos in which the story line confronts or converges into elements that are found in the surrounding exhibition space. His videos are the result of a discerning mixture of fiction, role-playing, and contemplative sequences, the viewer being placed at the center of the artwork.

Damir Očko
The Kingdom of Glottis

With “The Kingdom of Glottis”, Damir Ocko invites us to explore the twists and turns of language and the ways in which speech can be poetically generated by the neurophysiologic system. To that end, he presents a video trilogy made of The Moon shall never take my Voice (2010), We saw nothing but the uniform blue of the Sky (2012) et SPRING (2012), the latter especially produced for this exhibition. Constituting their graphic counterpart, a set of drawings, poems and collages complement these videos in which sound occupies a prominent place. In his “score drawings”, he plays with sound and creates a formal equivalent for them, using ricochets, leitmotivs and perforations. Here, he transforms the space into a full-scale musical score, made up of elements of varying sizes.

Damir Ocko’s works are part of a constellation of ideas at once dense, melancholic and poetic, where the individual elements call and respond to one another, like a soundscape at the edge of the imagination, between hope and oblivion, between reality and fiction.

The exhibition conceived by the philosopher Boris Groys is an opportunity to discover the visual collection of Alexandre Kojève (1902-1968), a French philosopher of Russian origin, for the first time.

Alexandre Kojève had a very early presentiment of the West’s entry into a “post-historical era”: With history immobilized and no room left for ideological struggles, virtually all that remains in the world is the administration of commonplace activities. In 1933 he moved to France and for six years held an interpretation seminar on Hegel’s Phenomenology of Spirit. Immediately after the end of World War II, Alexandre Kojève abandoned philosophy to become a diplomat on behalf of the French government and of the European Union.

Boris Groys discovered this immense visual collection in the Kojève archives at the Bibliothèque Nationale de France (Nina Ivanoff donation, 2004). For the Palais de Tokyo, he decided to devise an exhibition based on it, consisting of slide presentations showing almost 400 photographs taken by Kojève. Boris Groys stresses the way in which “Kojève adopts this anonymous and highly conventional postcard style in making his own photographs”, which “reflect his administrative view of the world combined with a certain post-historical melancholy.”

Palais de Tokyo
13, avenue du Président Wilson - 75 116 Paris
OPENING HOURS
Daily, except on Tuesdays
From noon to midnight
It closes on 1 January,1 may and 25 december.
And at 6pm on 24 and 31 december.
ADMISSION
Regular fee: 8 EUR
Reduced fee: 6 EUR
(under 26 years-old visitors, holders of France’s Carte Famille Nombreuse, teachers)
Free : Under 18 years-old, job seekers, people in receipt of French state benefits (minima sociaux) and the minimum pension, ICOM, IKT, journalists, people with disabilities and their carers (in accordance with the conditions laid down by the Maison Départementale des Personnes Handicapées).