In their film The Empty Plan London-based artists Anja Kirchner and David Panos contrast scenes from three different productions of Bertolt Brecht's 1931 play Die Mutter; the sculptural painting installations of Swedish artist Jakob Simonson is in dialogue with the film. 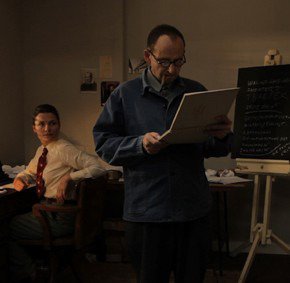 Realism is not a style, nor a manner. To navigate between the reality of things and the capacity to imagine solutions that surpass the obstacles in a given system, without fleeing into escapist endeavours, is quite an ambiguous challenge. A challenge that might seem too costly to undertake.

In their film The Empty Plan London-based artists Anja Kirchner and David Panos contrast scenes from three different productions of Bertolt Brecht’s 1931 play Die Mutter, with scenes from his exile during the 1940's in Hollywood, the mecca of entertainment. Shifting between documentary, historical reconstruction and melodrama, the focus on the relationship between theory and practice in Brecht’s theatre intermingles with conflicting personal, artistic and political ambitions, raising questions about the nature of art and the unrealised dream of its supersession through revolutionary practice.

In dialogue with the film, the sculptural painting installations of Swedish artist Jakob Simonson explore the border where the image comes into existence, or is lost – where the image is barely image. The front side, as well as the back, are both parts that are clearly presented to the viewer whose sight is set on a mode that oscillates between perception and illusion. Simonson’s works operate both as physical experiences featuring the involvement of the body, and as images dubious to our reason. It’s a back and forth movement between intellectual distance and emotional absorption that challenges every second of our attention.

Following Brecht’s logic, the only way to discourage the audience from falling into an illusionary narrative world, was to sit back, have a cigarette, relax and reflect on what was being presented in an emotionally distanced, critically engaged and objective way. That is not a style – it is an attitude.