"Now Dig This! Art and Black Los Angeles 1960-1980" presents approximately 140 works by 32 artists active during this historical period, exploring the increasing political, social, and economic power of African Americans across the nation. "New Pictures of Common Objects" the 5 emerging artists in the exhibition engage with images as raw material to create sculptures, videos, photographs and installations. Matt Connors presents a selection of extant pieces alongside new work. The opening celebration includes a performance program. 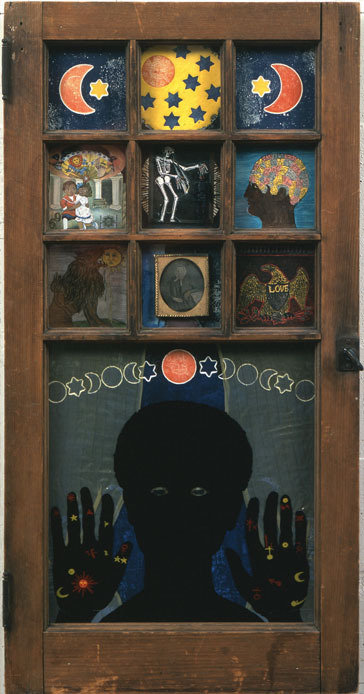 Now Dig This! Art and Black Los Angeles 1960–1980 chronicles the vital legacy of the African American artistic community in Los Angeles, examining a pioneering group of black artists whose work, connections, and friendships with other artists of varied ethnic backgrounds influenced the creative community and artistic practices that developed in Los Angeles during this historic period. The exhibition presents well over 100 artworks by these artists and the friends who influenced and supported them during this period, in which the power of the black community strengthened nationwide as racial discrimination began to lessen as a result of new legislation and changing social norms.

The artists included in Now Dig This! represent a vibrant group whose work is critical to a more complete and dynamic understanding of twentieth century American art. Several prominent black artists began their careers in the Los Angeles area, including Melvin Edwards, David Hammons, Maren Hassinger, Senga Nengudi, John Outterbridge, Noah Purifoy, and Betye Saar. Their influence, like that of all of the artists in the exhibition, goes beyond their immediate creative circles and the geography of Los Angeles—including to New York, where a number of the artists exhibited their work and ultimately settled.

Now Dig This! Art and Black Los Angeles 1960–1980 is organized by the Hammer Museum, Los Angeles. The exhibition is curated by Kellie Jones, Associate Professor in the Department of Art History and Archaeology, Columbia University, and organized at MoMA PS1 by Christophe Cherix, The Abby Aldrich Rockefeller Chief Curator of Prints and Illustrated Books, The Museum of Modern Art, and Peter Eleey, Curator, MoMA PS1, in association with Connie Butler, The Robert Lehman Foundation Chief Curator of Drawings, The Museum of Modern Art.

Additional funding is provided by The Junior Associates of The Museum of Modern Art and by Bernard Lumpkin and Carmine Boccuzzi.

The exhibition was made possible by major grants from the Getty Foundation. Generous support was provided by the Henry Luce Foundation; the National Endowment for the Arts, a federal agency; The Andy Warhol Foundation for the Visual Arts, which funded a Curatorial Research Fellowship; and The Broad Art Foundation..

Artists today have a very different relationship to mass consumption and images then artists who first engaged with these topics in the 1960s. Recent technology has created a vast archive of images that is easily accessible by computer, smartphone, and other devices. Technology has also amplified the flexible nature of pictures—early pop culture envisioned throngs of passive consumers while individuals today engage with imagery as active participants. Twenty-first century images are not only distributed from central hubs, but are rapidly circulated and exchanged among peers. The decentralized model has flattened hierarchies, fostering a sense of equivalence and ambiguity in which making, consuming, and sharing are all regarded as creative acts. The five emerging artists in the exhibition engage with images as raw material to create sculptures, videos, photographs, and installations. They recognize the elastic and diffuse nature of images, utilizing pictures to challenge expectations of genre, form, and meaning.

New Pictures of Common Objects is supported in part by Matthew McNulty.

Like many younger painters working with abstraction, Matt Connors (American, b. 1973) engages freely with the histories of his medium without depending upon them. His canvases absorb influences from a disparate and evolving roster of artists, as well as writers, filmmakers and musicians to whom the artist looks for inspiration, and this casual porosity is likewise reflected in the formalities of his method. Connors mostly uses raw canvas, often taking rubbings from his studio floor, pouring layers of paint into the fabric like dye, or using one wet painting to imprint another. His paintings are remarkable for the apparent thinness of their surface; paint ends up in them, rather than on them. As such, Connors’ works act as both pictures and objects, registering the surfaces behind or beneath them, as well as those before them—including other paintings and things close at hand in his studio. His paintings inhabit a space in between, taking and offering impressions of their immediate surroundings in time and space, and those more distant. Impressionism is the artist’s first solo museum presentation in the United States, and features a focused selection of extant pieces alongside new work made specifically for the exhibition.

A new publication by Matt Connors titled A Bell is a Cup will be published by Rainoff and launched to coincide with the exhibition. The publication includes texts by Peter Eleey, Michel Leiris, Jack Spicer and Gertrude Stein.

Clifford Owens: Anthology Book Launch & Conversation
3–4pm, Lobby
In celebration of Clifford Owens' publication based on his 2011 MoMA PS1 exhibition, the artist will be in conversation with Assistant Curator Christopher Y. Lew. Owens' first publication includes the written performance scores that he solicited from fellow African-American artists as well as the final artworks that resulted from the live performances. The book features essays by art historians Huey Copeland and John Bowles, in addition to interviews with individuals who attended the live performances and a round-table discussion with selected Anthology artists moderated by art historian Kellie Jones.

The Meeting, Malik Gaines and Alexandro Segade
4–6pm, the MoMA PS1 Performance Dome
In conjunction with the opening of Now Dig This! at MoMA PS1, Malik Gaines and Alexandro Segade (of My Barbarian operating under the aegis of Courtesy the Artists, a new interdisciplinary collaboration,) will present a performative program based around the life and work of African American activist Elaine Brown and her album Seize the Time recorded by the Black Panther Party in 1969. The program features artists, including Charles Gaines, Simone Leigh, Adam Pendleton and Samita Sinha, among others.

Join us on October 21 for our Fall Open House to celebrate the opening of Now Dig This! Art and Black Los Angeles 1960–1980, New Pictures of Common Objects, and Matt Connors: Impressionism. The opening celebration will include a performative program selected by Malik Gaines and Alexandro Segade; a book launch and conversation with artist Clifford Owens; a cash bar; and delicious eats provided by M. Wells.