Jiri Kolar created mostly surreal collages, often produced using innovative techniques. 'The lunatics are on the loose...' aims to provide a synopsis of the Fluxus activities during the European festivals organised during the 60s and 70s. Anita Glesta refers to the bombing of Guernica during the 1937 Spanish civil war in her multimedia installation. Over a dozen photographs from the series Post-industrial by Wojciech Wilczyk. Also collages, items, installations and art books realized by Banda group. 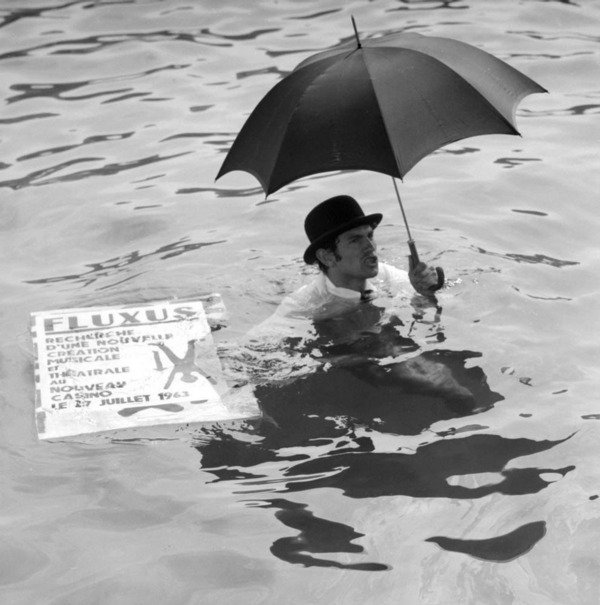 Jirí Kolár’s exhbition is the first such large monographic presentation in Poland of one of the most prominent Czech artists. Kolár created mostly surreal collages, often produced using innovative techniques. His visual art works reflect in their complexity the wide range of the artist’s interest. Apart from visual art, Kolá also produced literary works, both prose and poetry.

To accompany the exhibition, MOCAK will publish Eyewitness, the first Polish translation of the artist’s post-war diaries.

An exhibition to commemorate the 50th anniversary of the founding of the international artist network Fluxus. In 1962 at the Wiesbaden Museum, a group of young artists organised the festival Fluxus – Internationale Festspiele neuester Musik, which combined music and performance. On the poster advertising the event, someone wrote,’THE LUNATICS ARE ON THE LOOSE...’ During one of the performances, the originators of the movement shaved their heads and, shouting loud, took the grand piano apart. The audience showed their frank disapproval. For the first time, the world got to hear about Fluxus.

The exhibition aims to provide a synopsis of the Fluxus activities during the European festivals organised during the 60s and 70s. The exhibition will offer such materials as photographs, interviews with artists, visualisations, presentations documenting local art events, and Do-It-Yourself Fluxus installations.

The exhibition is part of the project Marks of Memory.

The bombing of Guernica during the 1937 Spanish civil war became part of world history thanks to Pablo Picasso’s painting Guernica. The American artist Anita Glesta refers to the event in her multimedia installation. The core of the installation is provided by the interviews which the artist conducted five years ago with some Guernica residents who survived the bombing. The visitors will be able to listen to their reminiscences, while seated on a bench under the MOCAK arcades or view them in the video show in Galeria Beta.

The exhibition is part of the project Marks of Memory.

Wojciech Wilczyk’s exhibition Post-industrial Spaces will present over a dozen photographs from the series Post-industrial. The works were produced during 2003–2006. They show post-industrial object, the majority of them in Poland: in Jaworzna-Szczakowaj, Katowice-Szopienice or Krakow. They are on the whole abandoned or defunct production works, now slowly decaying, often with active help from local residents.

A glass snow globe from Egypt, a hatchet from Zakopane, postcards from Sopot, a ship in a bottle, shell beads, a towel with a labrador, pressed herbs...

The works of the group Banda from the Department of Graphic Art in Krakow are a playful take on summer souvenirs and holiday memories. What the collages, items, installations and art books on display have in common is that they were created during the 2012 heat wave.