The exhibition features 118 paintings, sculptures, and works on paper from 1904 to 1971, and will offer new and striking insights into Pablo Picasso's vision and working methods. This chronological presentation comprises significant loans drawn from private and public collections across Europe and the US. The recurrent motif of black, white, and gray is evident in his Blue and Rose periods, pioneering investigations into Cubism, neoclassical figurative paintings, and retorts to Surrealism. 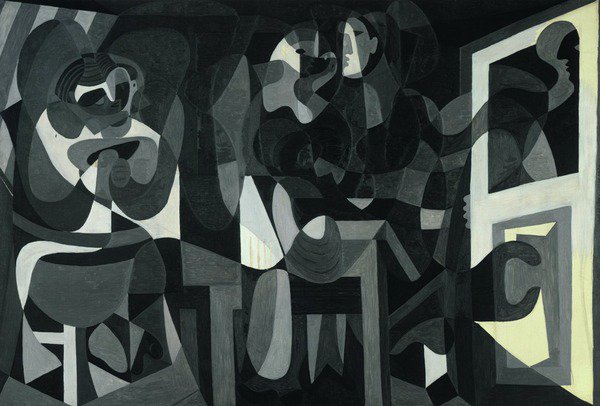 Picasso Black and White, the first major exhibition to focus on the artist’s lifelong exploration of a black-and-white palette throughout his prolific career, will be presented at the Guggenheim Museum from October 5, 2012, to January 23, 2013. The exhibition features 118 paintings, sculptures, and works on paper from 1904 to 1971, and will offer new and striking insights into Pablo Picasso’s vision and working methods. This chronological presentation comprises significant loans drawn from private and public collections across Europe and the United States, five of which have never before exhibited or published, including works from the Picasso family and other lenders that will be on public view for the first time. Thirty-eight of these artworks will have their first U.S. presentation.

Picasso Black and White is organized by Carmen Giménez, Stephen and Nan Swid Curator of Twentieth-Century Art, Solomon R. Guggenheim Museum, with assistance from Karole Vail, Associate Curator, Solomon R. Guggenheim Museum. The exhibition is accompanied by a fully illustrated catalogue with an essay by Ms. Giménez as well as essays by Dore Ashton, Olivier Berggruen, and Richard Shiff.

Exhibition Overview
Few artists have exerted as considerable an influence over subsequent generations as Pablo Picasso (1881–1973). While his work is often seen through the lens of his diverse styles and subjects, the recurrent motif of black, white, and gray is frequently overlooked. Picasso Black and White presents a unique and illuminating perspective on a lesser-known but fascinating aspect of his formidable body of work. Claiming that color weakens, Picasso purged it from his work in order to highlight the formal structure and autonomy inherent in his art. According to Carmen Giménez, his repeated minimal palette correlates to his obsessive interest in line and form, drawing, and monochromatic and tonal values, while developing a complex language of pictorial and sculptural signs. The recurrent motif of black, white, and gray is evident in his Blue and Rose periods, pioneering investigations into Cubism, neoclassical figurative paintings, and retorts to Surrealism. Even his later works that depict the atrocities of war, allegorical still lifes, vivid interpretations of art-historical masterpieces, and his sensual canvases created during his twilight years continued to apply a reduction of color. Picasso Black and White will demonstrate how the artist was continuously investigating, inventing, and drawing in somber and austere monochromatic tones throughout his career.

Managing a complicated compositiong without having to organize contrasts of color, Picasso created such masterpieces as The Milliner's Workshop (1926, a pivotal black-and-white canvas on loan for the exhibition from Musée national d'art moderne/Centre de création industrielle, Center Pompidou, Paris), The Charnel House (1944-45, on loan from the Museum of Modern Art, New York), and The Maids of Honor (Las Meninas, after Velazquez) (1957, on loan from Museu Picasso, Barcelona). Ms. Giménez explains that the graphic quality of Picasso's black-and-white works harks back to Paleolithic cave paintings created from charcoal and simple mineral pigments to the tradition of grisaille, and to European drawing. Picassoused this distinctive motif to explore a centuries-long tradition of Spanish masters, such as El Greco, José de Ribera, Francisco de Zurbarán, Diego Velázquez, and Francisco de Goya, whose use of black and gray was predominant.

Picasso Black and White is organized chronologically along the Guggenheim ramps. The exhibition opens with Woman with Vase (1933), one of two works installed on the rotunda floor. Picasso made an original plaster cast from which he molded a cement version, and displayed this later iteration at the 1937 Paris World’s Fair in front of the Spanish Pavilion. The cement sculpture disappeared when the fair was dismantled. Two bronze copies molded from the plaster were subsequently cast in 1972–73. Picasso donated one of these two copies to the people of the Spanish Republic, which currently belongs to the Museo nacional de arte Reina Sofía in Madrid. With the assistance of Ms. Giménez, it finally arrived in Spain in 1985. A second bronze version of this sculpture stands above Picasso’s tomb at the Château de Vauvenargues in the South of France.

Five major sculptures, spanning from 1909 to 1941, will be on view in the High Gallery and are examples of his most radical works. Among the many works on loan from public collections are Picasso’s Man, Woman, and Child (1906, on loan from the Kunstmuseum Basel), and Head of a Horse, Sketch for Guernica (1937, on loan from the Museo nacional centro de arte Reina Sofía, Madrid), which is his largest sketch for Guernica (1937). Exhibition highlights from private collections include: Female Nude with Guitar (1909), a rare, large charcoal drawing on canvas that remained in Picasso’s collection until his death; The Women of Algiers (version L) (1955), an interpretation of an art-historical masterpiece; The Studio at La Californie (1956), a monumental canvas; Seated Woman (Jacqueline) (1962), an important nude in tones of black and white; and five works that will be on public view for the very first time, such as Draped Nude Seated in an Armchair (1923) and Boat and Figures (1938).

Exhibition Tour
Following its New York presentation, a major part of the exhibition will travel to the Museum of Fine Arts, Houston, where it will be on view from February 24 to May 27, 2013.

About the Curator
Carmen Giménez was recently inducted into Spain’s Royal Academy of Fine Arts (Real Academia de bellas artes de San Fernando) as Academician of Honor, and is the first woman to hold this title. Ms. Giménez is internationally recognized for organizing many acclaimed Guggenheim exhibitions as well as presentations throughout Europe, including the inaugural exhibition References and Identity: An Artistic Meeting in Time at the Museo nacional centro de arte Reina Sofía in Madrid, and the inaugural exhibition El Picasso de los Picasso (Picasso’s Picassos) at the Museo Picasso Málaga, where she served as director from 2003 to 2004. Ms. Giménez joined the Guggenheim in 1989, and has since curated such landmark exhibitions as: Picasso and the Age of Iron (New York, 1993); Richard Serra Escultura 1985–1999 (Bilbao, 1999); The Global Guggenheim: Selections from the Extended Collection (New York, 2001); Calder: Gravity and Grace (Bilbao, 2003); Constantin Brancusi: The Essence of Things (New York, 2004); David Smith: A Centennial (New York, 2006); Spanish Painting from El Greco to Picasso: Time, Truth, and History (New York, 2006–07); Cy Twombly (Bilbao, 2008–09); and Picasso Black and White (New York, 2012–13).

Education and Public Programs
Picasso Black and White will be accompanied by a full roster of public programs. All ticketed programs are followed by receptions, and are $10, $7 members, and free for students with ID and RSVP, unless otherwise noted. Details and registration information may be found at guggenheim.org/publicprograms.

Film Screenings
Fridays, October 5, 2012–January 18, 2013, 1 pm (Except November 23)
Filmed through glass and transparent canvas, the rare documentaries Visit to Picasso (1949, dir. Paul Haesaerts) and The Mystery of Picasso (1956, dir. Henri-Georges Clouzot) provide an exceptional portrait of the artist in the throes of creation. Free with museum admission. Visit guggenheim.org/ filmscreenings for a complete schedule.

Picasso: A Conversation
Friday, November 2, 6:30 pm
Carmen Giménez, Stephen and Nan Swid Curator of Twentieth-Century Art, Guggenheim Museum, and curator of Picasso Black and White, engages in conversation about the Spanish master and his lifelong exploration of a black-and-white palette with Diana Widmaier Picasso, art historian, co-curator of Picasso and Marie-Thérèse L’Amour fou (Gagosian Gallery, New York, 2011), and granddaughter of the artist, and Gary Tinterow, Director of the Museum of Fine Arts, Houston, as well as curator and author of notable Picasso exhibitions and publications.

Due to unforeseen personal circumstances we regret to announce that Pierre Daix is unable to participate in this program as previously planned.