The Civic and the Arts. Looking back upon the past sixty years, how and whereby did art have an impact on public discourse? The exhibition takes a retrospective look on the time since 1945. It illustrates how individual works of art have not only been received in terms of their aesthetic quality but, beyond that, have become meaningful symbols for society. Works by Francis Alys, Joseph Beuys, Hans Haacke, Alfredo Jaar, Gerhard Richter and many more. 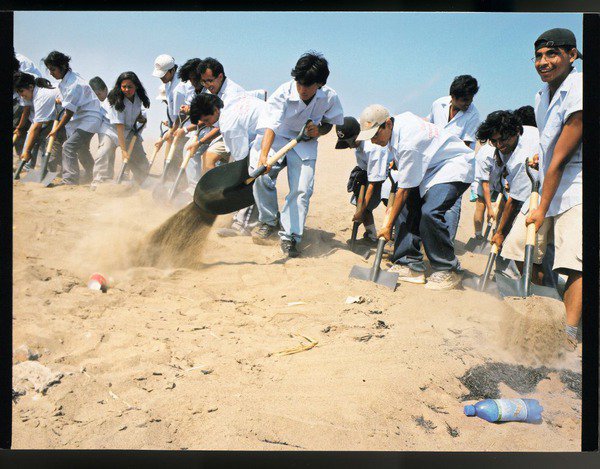 Looking back upon the past sixty years, how and whereby did art have an impact on public discourse? What kind of debates were initiated by certain works of art? How did artists contribute to public debates? Questions such as these are at the centre of the exhibition "BILDERBEDARF. The Civic and the Arts" that opens on October 20, 2012, at the Staatliche Kunsthalle Baden-Baden.

BILDERBEDARF takes a retrospective look on the time since 1945. The works of art that are on display at the exhibition have been selected according to criteria that, at first, might seem unusual: Our point of interest was the concrete and therefore verifiable effect these works of art had in the realm of the civil society. Correspondingly, the exhibition illustrates how individual works of art have not only been received in terms of their aesthetic quality but, beyond that, have become meaningful symbols for society.

A central work of art shown in the exhibition BILDERBEDARF is Gerhard Richter's painting "Onkel Rudi". The story of its reception serves well to illustrate how art has had an influence on public discourse by addressing the subject of historical injustice. In 1968 the German art dealer and curator René Block travelled to Prague. He was transporting works of art by German artists – such as Gerhard Richter's painting "Onkel Rudi" that shows his uncle, wearing German Wehrmacht uniform – in order to exhibit them there. Afterwards, they were meant to be given to the village of Lidice as a gift and for compensation. Lidice had been completely destroyed be German forces in 1942. Yet the artworks soon had to be relocated: After the invasion of Soviet troops and the abrupt ending of the Prague Spring, they were brought to a safe place and disappeared. It was only thirty years later that these works of art were found again close to Prague and that they were officially given to the municpality of Lidice. Thus, a private initiative has turned into a symbolical act of ethical compensation.

In a more direct manner, Christoph Schlingensief's project "Ausländer Raus!" ("Foreigners Out!") that took place in 2000 has has an effect on civic life. Invited by Luc Bondy, the artistic director of the Wiener Festiwochen (Vienna Festival), Christoph Schlingensief established a container village for immigrants close-by the Vienna State Opera. In the style of popular TV shows like "Big Brother", people could vote for the eviction of participants by telephone and on the Internet. The "winner" was supposed to receive a permanent residence authorisation through marrying an Austrian. Schlingensief's project coincides with the ruling of the conservative Austrian People's Party and right-wing populist Freedom Party of Autria (FPÖ) under the aegis of Jörg Haider. His staged deportation was broadly covered by the media and evoked lifely public debates.

Gerhard Richter's painting "Onkel Rudi" and Christoph Schlingensief's project "Ausländer Raus!" are only two of many more examples of the exhibition BILDERBEDARF which traces the impact of art on public discourse. A poetic contribution to support this claim is made by Francis Alÿs’ installation "When Faith Moves Mountains". For this project that was realised in 2002 in Lima he found more than 500 volunteers to make an attempt at literally moving a mountain - equipped with nothing but shovels and good will. This powerful as much as seemingly ineffective act against the laws of nature serves as a parable for the utopian aim of the exhibition.

In October 2013 there will be a follow-up exhibition, focusing on the meaning of art for public discourse in the globalised civil society of the 21st centrury.