Moment. The photographer has been interested in localities he discovers through photographs; specific settings portrayed by others. In his photographs he investigates the environments documented and the history of the original images, attempting to extend these stories in time and space. 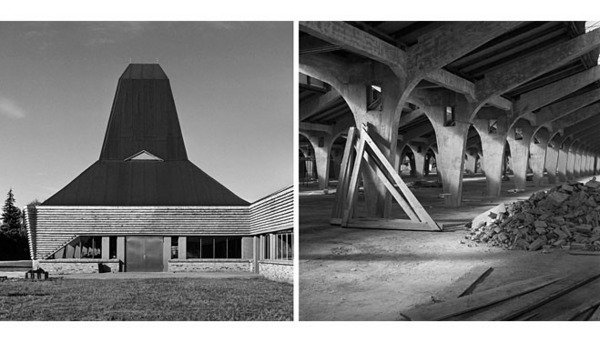 The photographer Gerry Johansson has long been interested in localities he discovers through photographs; specific settings portrayed by others. Images by photographers such as Walker Evans, Robert Frank and Carl Gustaf Rosenberg have fascinated him and aroused his curiosity. What was omitted by the photographers from these images? In his own photographs Johansson investigates the environments documented and the history of the original images, attempting to extend these stories in time and space.
For Gerry Johansson, the project Luckenwalde (2009, 2011–12) began with a conversation in 1986 between him and Dick Bengtsson, when he was commissioned to portray the artist. Dick Bengtsson’s series of paintings with swastikas includes the diptych Hat and Cap Factory (1969) in the Moderna Museet collection. The painting is based on a black-and-white photograph in a Swedish encyclopaedia, Svensk Uppslagsbok (1947–55), of the architect Erich Mendelsohn’s modernist factory building in Luckenwalde, an industrial town 50 kilometers south of Berlin.

In this project, we learn more about Luckenwalde’s social housing programme and about the Herrman family; the factory owners who were forced to sell the factory due to their Jewish heritage. We learn about the reason for the unusual design of the building, and about the hat manufacturer’s continued enterprise during and after World War II until its bankruptcy in 1990.

Gerry Johansson (b. 1945) studied at the School of Industrial Design in Gothenburg followed by 15 years of work as a graphic designer. In the mid 1980s, he began his practice as an independent photographer. Throughout his career he has been working in the classical black-and-white tradition with focus on cities and landscapes. Johansson published some twenty books, among them Amerika: Fotografier (1998), Sverige (2005), Ulan Bator (2009), Öglunda (2011) and Deutschland (2012).

Parallel with Gerry Johansson’s exhibition, a number of Dick Bengtsson paintings from the Moderna Museet collection are displayed in the second part (01:2) of the galleries for the collection.

At 6.30 a conversation between curator Anna Tellgren and Gerry Johansson. Entrance through the main doors, Exercisplan. Moderna Bar is open until 11 pm.