Artists who incorporate sculptural, photographic, and metaphorical light in their work, often using scientific methodologies and influences, as well as artists who produce work that is in some way transformative, or suggests a change in either an object or within the human spirit or psyche. 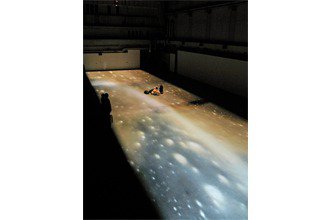 A new exhibition linking to the work of Joseph Wright of Derby, The Enlightenment and what this period meant to the city of Derby and the Midlands, will take place in QUAD, Derby, from October. The exhibition, entitled ‘Illuminated’, will look at ‘light’ - both as an influence, as it is incorporated through artists work or in a metaphorical sense. Other key references in the exhibition include scientific advancement, as it was in the mid to late 18th Century as well as the influence of the Lunar Society on the region. ‘Illuminated’ will be on display in QUAD Gallery from 27th October 2012 until 3rd February 2013.

Illuminated will feature artists who incorporate sculptural, photographic, and metaphorical light in their work, often using scientific methodologies and influences, as well as artists who produce work that is in some way transformative, or suggests a change in either an object or within the human spirit or psyche. Illuminated is a mixed media show which features artworks in a range of media by artists: AVPD, David Batchelor, Gunda Förster, Tristan Hessing, Torsten Lauschmann, Katie Paterson, Semiconductor, David Ward, and Joseph Wright of Derby. Illuminated is curated by QUAD Curator Peter Bonnell.

The exhibition will include a preparatory drawing for The Alchymist (1771) by Joseph Wright of Derby. Also featured are David Batchelor’s sculptural installations, made from objects found in the streets of London and given new life as empty but brightly coloured light works. Katie Paterson’s film work Ancient Darkness TV is a collaboration between the artist and astronomers from the Mauna Kea Volcano telescope. Paterson’s film features an image of ‘ancient darkness’ that was broadcast for one minute on New York television station MNN, revealing darkness from the furthest point of the observed universe, 13.2 billion years ago, shortly after the Big Bang and before Earth existed, when stars, galaxies and the first light began to form.

Also featured in the exhibition, the ‘abstract’ imagery in David Ward’s RINK includes photographic images by the artist, and also linear imagery from scientific sources, such as astronomy and line generated by particle collisions in the study of particle physics. Brilliant Noise by Semiconductor is a film work based on unedited satellite files and imagery from NASA of the Sun. The grainy black and white images and intriguing sound track depicts energies at play on the surface of our nearest star and the brightest light source in our Solar System.