The Transformers: Post-pop art automotive fetish. The focus is the car, dominant and omnipresent in our life. Even if they look like machines, the Transformers represent visually aesthetised objects: sculptures, created by transformation of some prominent car parts. 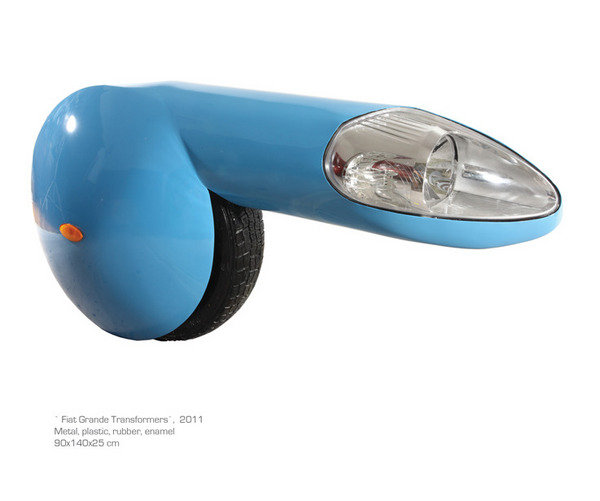 The present cycle of works of the author Nikola Kolja Bozovic, titled The Transformers, exhibited in the Belgrade Zvono gallery, represents an expectedly consistent creative shift from the previous series which deal with the world of robots and create the conceptual basis of the present cycle. Initially announced in the working version of 2011 in the catalogue of the exhibition Let’s Build the House for Robots!, and on this occasion complemented with new works, the Transformers were publicly presented for the first time within the exhibition of the same title.

In this series, there has been a shift from the robots, the angels of the new world order (Danijela Puresevic), the symbol of the New Age high- tech civilization (Branimir Gajic), which by their form and facial expressions remind us of people (or, at least, of humanoids). The focus of these works is another type of machine, dominant and omnipresent in our everyday life –a car. Even though they look like machines, unlike their namesakes from the entertainment world, the Transformers represent visually aesthetised objects – sculptures, created by transformation of some prominent car parts – primarily the front and rear lights (headlights, stop lights, indicators) and wheels or tyres. By excluding the associations with human activities, these sculptures neither emulate the people, with their reduced and anthropomorphic looks, nor do they contain a space for the driver, like children’s’ toys. Here, the man is redundant, except as a car user and owner.

Automobiles (gr. αὐτός – self and lat. mobilis – movable), the machines primarily conceived and created as the means of transport from point A to point B, after over a century of their appearance have become multifunctional: the examples of technological progress and profit, aesthetic praiseworthy objects, modern design accomplishments, the means of enjoyment as much as the means for bridging distances.

In a visual contact with the Transformers, you get an impression of something easily recognizable in its tactility, an object that is “gulped” with our eyes; an emblematic, status property of success, the supreme task of industrial design. A car almost always emphasizes the human characteristic its owner is particularly aware of. Specifically, this ego moment (which reminds us of the verse of the band Obojeni program (the Coloured Programme) Da li je to čovek ili je mašina (Do I see a Man or a Machine?) is probably the most powerful “ace card” of the highly profitable and successfully positioned object of industrial design.

The Transformers are also imitations of cars in terms of the materials used: their surface is made of sheet metal, putty and plastics, painted using car lacquer of clear basic colours, mirror-polished. In the process of creation, the artist engaged a professional auto body mechanic as a “contractor “ and, thus, the entire creation process differs from the industrial production (the parts of which are incorporated into sculptures). Headlights and tyres, which are the starting point for the further creative development of sculptures, were mainly taken from Fiat cars.

Unlike the interventions on cars inspired by graffiti or street NFS (Need For Speed), ghetto culture or unlike the construction of experimental vehicles using waste, it seems that the Transformers made by Nikola Kolja Bozovic move in the different direction. Seen as objects of art, they rely on a car as a basis and a three-dimensional object, interpreting it as a multi-layer pop-art sculpture with several possible interpretations, changing its appearance and physical properties. Instinctively relying on the “original“, it seems that in the contact with sculptures, a visitor gets the impression of astonishment due to a different, unexpected development path of the object.

Certain works of modern artists (such as Craig Fisher and Margarita Cabrera) refer to soft sculptures of Claes Oldenburg, creating full size 3-D cars of fabrics. The echo of these ideas may be seen in the tilted traffic light post which, along with abstract paintings on aluminium, enriches the ambience of the Transformers. Also relying on the pop-art legacy, an Austrian artist Erwin Wurm uses a motor boat, van and car as his sculptures. A similarity with the Transformers lies in the treatment of “templates “. However, while Erwin Wurm changes the appearance of machines represented in their full size scale, destabilizing their form (Fat Car, Telekinetically bent VW-Van, Renault 25/1991, UFO), Nikola Kolja Bozovic uses a part of the car which, after transformation of its structure and shape, becomes a composition itself. Both artists use four-wheelers as the starting point for achieving the effect of an uncommon and surreal (artistic) object used in everyday life.

In accordance with the legacy of (neo-, post-) pop-art, the objects of material consumer culture are dual basis of the Transformers: as the objects they were made of, and as the works of art. In this cycle, transformation – change and/or evolution, primarily of the utility value of the source object, is a distinctive characteristic of this artist, both in terms of the medium (painting, collage, performance, photograph, sculpture) and in terms of robots as a theme or an object of work, which were transformed from the paintings on acrylic and collage into three-dimensional objects. Perhaps the next step will be just their step.