To Be Continued. The exhibition presents the archive of slogans in two formats, one ephemeral and one material. Phrases will be projected fleetingly on moving steam and also printed on paper. Periodically slogans will be dusted on the windows and then cleaned, and an opera singer will perform compositions originally scored for Bajevic. Videos works will address other arenas of popular communication capturing Europe's economic crisis through children's eyes. 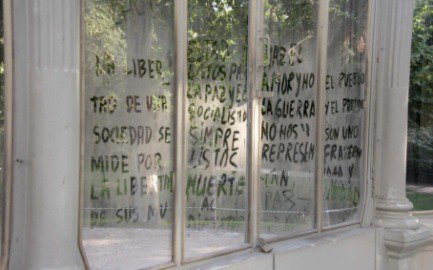 Is change the only stable factor in history? Certain language emerges at particular moments in history to incite emotion and political action. Artist Maja Bajević has been studying and archiving these phrases in Europe, tracking their appearance and disappearance. The quantity and content of slogans indicates a kind of social temperature, that changes as the speaker, the intent, and the receiver transforms over time.

The exhibition presents the archive of slogans in two formats, one ephemeral and one material. Phrases will be projected fleetingly on moving steam and also printed on paper so that viewers can take a copy with them. Periodically slogans will be dusted on the windows and then cleaned, and an opera singer will perform compositions originally scored for Bajević's recent exhibition at the Museo Nacional Centro de Arte Reina Sofia in Madrid. Videos works will address other arenas of popular communication and power dynamics: On a road trip from Paris to Sarajevo, Bajević filmed children at playgrounds, capturing Europe’s economic crisis through children’s eyes.

Reality + Fiction: Berlin’s Rimini Protokoll
Nov 30, 2012, 6pm
When people tell their own stories on stage, where are the boundaries of theater, reality, documentary, participation, and fiction? Berlin-based theater group Rimini Protokoll creates participatory and documentary theatre experiences that explore topics such as Egyptian muezzin resisting the consolidation of their profession (Radio Muezzin), Athenians grappling with the Greek economic crisis (Prometheus in Athens); and jet-setting children of corporate executives who feel most at home while in transit (Airport Kids). An afternoon screening of recent major works (Wahl Kampf Wallenstein, Prometheus in Athens, the 100% series) will be followed by an evening conversation between the artists of Rimini Protokoll and noted participatory performance scholar Claire Bishop (PhD Program in Art History, The Graduate Center, CUNY), moderated by Frank Hentschker (Executive Director, Martin E. Segal Theatre Center, The Graduate Center, CUNY).

Feb 19, 2012, 6:30pm | The James Gallery
The Art of Subtraction: Italian Art Since the 1960s
Carlos Basualdo, Gabriele Guercio, Romy Golan
This panel will consider Italian artists practicing since the 1960s, including Giovanni Anselmo, Elisabetta Benassi, Marisa Merz, Luigi Ontani, Cesare Pietroiusti, Michelangelo Pistoletto, and Emilio Prini. These artists, as Gabriele Guercio indicates in his book The Great Subtraction, use strategies of subtraction that may refer to the method through which the work is made or to its presence in the world. Subtraction involves dissociation and fissure that challenge the ways we understand and interpret works of art. Join panelists as they explore how subtraction has pushed interpretation beyond received notions of nationality, inspiring fresh definitions of what artistic greatness may mean in a globalized world.

Nov 7, 2012, 2:00pm | The James Gallery
Mary Miss Studio and CITY AS LIVING LABORATORY (CaLL), David Chapin, Cindi Katz
Mary Miss’s project City as Living Laboratory aims to establish Broadway as the “green corridor” of New York City, with twenty “hubs” dispersed along the length of the avenue serving as sites of collaboration between City as Living Laboratory, research scientists, municipal policy makers, and local community groups. Exploring the city as an urban ecosystem, with nature everywhere and in action at all times, it emphasizes the ways in which innumerable small decisions shape the environment we inhabit today, and exposes behavioral choices which have a decisive impact on our collective future. As the project progresses, the intention is to inspire future endeavors to make sustainability tangible through installations and programming by various artists, environmental designers, scientists and other collaborators along this corridor.

Nov 30, 2012, 1:00pm to 4:00pm | The James Gallery
To Be Continued/Concert
Three singing performances each lasting three hours will be presented while the exhibition is on view. Three singers, some of whom are trained musicians and others who are not, will improvise a capella on the composition by Basheskia and Edward Eq that mimics the form of a children’s game in which each sentence is begun with the last word of the previous phrase. Resembling the trill of a bird, the call and response format plays a game with expectations of an easy divide between nature and culture.

All programs are free and open to the public.
All events will take place in the James Gallery unless otherwise noted.

Nov 6, 2012, 1:00pm to Nov 7, 2012, 6:00pm - The James Gallery
Five-hour performances of mark-making in dust on the James Gallery ground floor windows along Fifth Avenue will take place nine times over the course of the exhibition. Scaffolding is erected temporarily and moved indoors along the avenue windows at intervals while paid members of the public dust and then mark with their finger on the hazy glass the words of political slogans from the twentieth century taken from the artist’s archive. Over the hours, they perform their contemplative work—sisyphean task of dusting, marking, erasing, and writing again. At times unreadable and jumbled, the recycled phrases remain on display after the performers have left.
Performances will run November 6th through November 7th, 1-6pm each day.

A second manifestation of this performance will take place from Tuesday February 5th to Saturday February 9th, 1-6pm each day.