For more than forty years, the urban environment has preoccupied Phyllida Barlow and provided a fecund source for her process-oriented sculpture. The exhibition continues her exploration into the ways in which sculpture can dissolve boundaries between realms of experience. 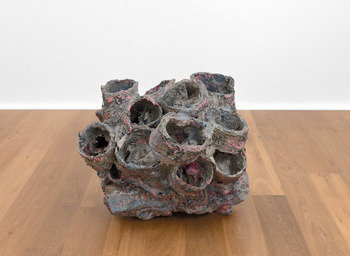 Hauser & Wirth New York is pleased to present ‘...later’, an exhibition of new work by celebrated British artist Phyllida Barlow. Opening 5 November 2012, this dense and exuberant sequence of installations is Barlow’s US follow-up to her recent solo show ‘siege’ at the New Museum in New York City. The exhibition continues her exploration into the ways in which sculpture can dissolve boundaries between realms of experience.

‘...later’ will remain on view through 22 December.

For more than forty years, the urban environment has preoccupied Phyllida Barlow and provided a fecund source for her process-oriented sculpture. Construction debris, signs, fences, and discarded objects are the sorts of unloved materials she adopts, assembles, and paints colorfully and crudely into sculptural forms that are simultaneously menacing and playful, overwhelming and delicate. Incorporating intimately scaled objects and enormous forms alike, her jammed-to-the-rafters installations actively engage viewers by drawing them among, under, and around obstacles in much the same way that the city does on a daily basis. Barlow explains that she is compelled by ‘the way things are replaced, destroyed, and covered over very quickly’ in the world around us, to fashion analogs for the joys and fears of everyday life. ‘The work,’ she has said, ‘is completely about the fragility of existence’.

At Hauser & Wirth New York, Barlow is unleashing a series of more than two dozen rough-looking and vaguely anthropomorphic forms across two floors of the gallery’s townhouse. Here she is reacting against the conventional definition of sculpture as an immutable form separated from its surroundings: Large ‘awnings’ and ‘lattices’ will climb the walls. Enormous suspended boulder-like ‘lumps’ will hang from ceilings. Along with freestanding objects, these will merge into an unsettled cohesion with the gallery’s domestic spaces, swallowing their environment and drawing visitors into intriguing physical encounters.

Sculptures with such titles as ‘upturnedhouse’ and ‘holedwall’ – constructed from ubiquitous low-brow materials like plywood, cement, polystyrene and wire netting – will be part of a complex, topsy-turvy topography conceived by Barlow to interrupt viewers’ consciousness and awaken them to their own assumptions.

Among the works on view in ‘...later’ will be a grouping of eleven large painted cement and plywood steles topped with barely recognizable remnants of the sculptors’ process – ‘anvil’, ‘holeddrill’, ‘midchainsaw’, ‘roaddrill’. A sly commentary on classicism, authorship, and perceived value, this group suggests an object lesson in what it takes for everyday stuff to become art. Color animates the surfaces of the pieces, rendering a delicate friction that engages the eye as it climbs from base to top. Together with the other works on view in ‘...later’, these precarious-looking sculptures critique monumentality while capturing the joyfulness, absurdity, and transience of life.

‘There’s something about walking around sculpture that has the possibility of being reflective, like walking through a landscape’, Phyllida Barlow has said. ‘The largeness of sculpture has that infinite possibility to make one engage beyond just the object itself and into other realms of experience’.