The selected works share a critical perception of social and political events based on sound intervention into a public space. The artists extracted the sound that was primary in their work and selected locations on the map in which to set them that are related to the creation of their works. 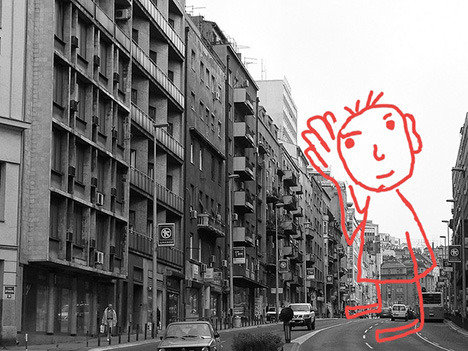 The sound maps are created from nine selected (art/activist) works based on sound perception. The artists extracted the sound that was primary in their work and selected locations on the map in which to set them that are related to the creation of their works. The selected works share a critical perception of social and political events based on sound intervention into a public space.
The exhibition displays works by artists from the Balkans who share a similar but interrupted recent history that – today more than ever – re-establishes closeness. As illustrated by the artists, art proves to be a neuralgic point in a system because it revisits again and again its own history and forms a relation to the present that it critically reflects upon.

The Response Sound Maps/Walks are based on the radio aporee application. There are several modes of perception available to the visitor: a) a physical experience of the walks / artistwalks that follow marked paths composed of artworks in Ljubljana, Zagreb, Belgrade, Sarajevo, Mostar and Durres; b) a virtual walk on the map available at the gallery and online; and c) a combination of the physical and virtual experiences.
Like a foundation for the participating works, the sound and listening expand from the contextual sound landscape recordings, through primary, reduced sound records that are uniform and function as a sign, to displaced poetry as well as the hacked and re-directed narrative.
Through the exhibition project, the strength of a directed hearing experience is being processed. It is interesting to observe the way it affects the perception of a given space. A visitor of Response Sound Maps/Walks becomes a listener of the space that incorporates the reactions to what happens in the city. By placing the works in a physical location, a set of cities, locations and architectural objects that the artists give a voice to, we can listen to the story of a place. Space mapping through listening directs the attention not only to the city’s architecture but also to the power of its formation, which is not a coincidence but a basic place from which to further delegate and direct the population. The selected locations on which the works extend are not neutral; the reactions to political and social transformations are inscribed in them. Further to this, the map formed also investigates whether in situ works are able to establish a network of spatial connections that, by way of interactive sound maps, consolidate, complement or even transform the perception as well as the experience of a given space.